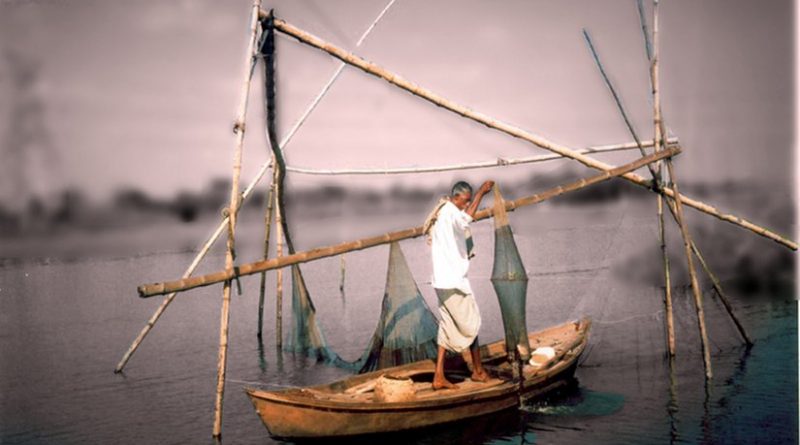 A man fishing in Bangladesh.

If the mini communal riots in Bangladesh’s Chittagong Hill Tracts (CHT) on October 01 are an indication for things to come in the country heading towards general elections, there is reason for serious concern. A rumour was spread that the holy Quran was desecrated by a local Chakma Buddhist official. Someone had tagged this official on Facebook site with the offensive photograph. The local police gave the Buddhist official and his mother protection from a rampaging crowd.

In Ramu Upazilla alone, 50 houses were attacked and 12 Buddist temples torched within hours of the rumour spreading. Elsewhere in the CHT and Chittagong District more such incidents took place. Matters were brought under control soon by an alert police and officials.

Initial investigations by the police and the media revealed that the whole incident was planned in advance. The marauders were Jamaat-e-Islami (JEI) and BNP cadres and workers. Some Rohingyas (Arakanese Muslims expelled from neighbouring Myanmar) were reportedly involved. What was heartening was the speed with which the authorities brought the situation under control and secured the area.

The Awami League led coalition government and party leaders have alleged that this was a BNP-JEI conspiracy to derail the 1971 was crimes trials which have picked up pace recently. The main opposition leader and BNP Chairman Begum Khalida Zia condemned the riots, emphasized on communal harmony and called for exemplary punishment for the culprits. She also made a weak effort to hold local ruling party leaders responsible for inciting the riots.

Begum Zia knows that there were few buyers for her charge against the ruling party. Election politics is beginning to take shape.

There is a much larger context to this incident which may come to play in the coming months as the contending political parties for the elections in January, 2014 – a little over a year away. The parties have begun entering the poll mode.

A film produced in the USA by an Egyption Coptic Christian allegedly insulting the Prophet (PBUH) sparked a series protest movements and demonstrations in the Islamic world. This has become a weapon for Islamic extremists, although the film has not been released commercially.

The American Constitution’s freedom of speech and that of some other countries have raised some serious questions. How absolute is the freedom of speech? In many cases they are liable to libel. Granting that religion, Christianity, in the west has been diluted to a great extent and Jesus Christ and the holy Vatican have been critiqued without fear, it does not mean that there is a licence for the western Christian community to attack or criticize other religions including Islam. Freedom of speech is not absolute. Different parts of the globe are in different stages of evolution, and insult to any religion can become a tool for the obscurantist who makes politics and business out of religion.

The CHT riots played exactly on the insult to Islam narrative, and the blasphemy law in Pakistan used against minorities including Ahmediyas are passages which the interested parties in Bangladesh can try and exploit. It may be pertinent to recall that successful Islamic terrorist attacks have had a rejuvenating effect on the extreme parties and their partners in Bangladesh. The trend of the 2001 elections in Bangladesh took a sudden turn following the Al Qaida’s devastating attack on the United States. It denoted the supremacy of Islamic extreme practitioners and the BNP-JEI led four-party alliance swept through. To the large section of voters in the uninformed section, this type of religion was their saviour. And they voted accordingly.

The CHT incident should be seen by the authorities in Bangladesh in the 2001 context. It is not only the minorities that would be hurt if the extremists and their cohorts successfully exploit this new Islamic outrage created by an idiotic Egyptian Coptic, whose postulations have been challenged by neutral non-Muslims scholars. The November, 2008 elections demonstrated that the BNP-JEI government’s policy of using religious extremists had failed. The country looked for stability, development and opportunities for the youth.

There is no doubt that Prime Minister Sk. Hasina’s personally supervised initiative reduced terrorism to an unexpected extent. At the same time, the godparents of most of the extremist groups are alive and well, and their workers have only gone underground only to resurface at a suitable time. There around 120 such groups in the country, most of them officially banned. The security apparatus has been chasing these groups, and many of them have been arrested.

Foreign funding to these extremist groups has been mostly blocked. But Bangladesh like many other countries including India does not have the capacity to concretely stop such inflows. That would be expecting too much. The government’s initiative is further thwarted by domestic fund collection by the extremist groups, hawala transactions and money carried on person. To illiterate and deprived sections of the society religion is the only anchor and hope. But it would be a mistake to see extremism only among the deprived. Many highly educated and well to do people remain the master minds. Many play their role from abroad.

From the point of view of the mentors of the extremist groups and their co-conspirators above, especially Pakistan there is one person that stands between them and their goal, and that person Sk. Hasina Wazed, the elder daughter of the acclaimed father of the nation Sk. Mujibur Rahman. As her father, Sk. Hasina is pushing for a secular and yet Islamic Bangladesh where there is equal status between different religions and sexes. Emancipation of women and protection women’s rights was strongly pursued by Prime Minister Sk. Hasina against strong opposition from Islamic groups and parties. The BNP-JEI combine now extended to a 18-party coalition is the anti-thesis of the Awami League and its progressive alliance partners.

The tussle is centered on two questions in the same issue. Should Bangladesh build on the ideals of liberation from Pakistan in 1971? Or, should Bangladesh rescind its independence and return to Pakistan’s fold at least in some kind of federal relationship, and plunge into a cauldron of terrorism like Pakistan?

In the 1971 war crimes trial, the cream of the JEI leaders are charged with collaboration with the Pakistani army, human rights violation under the protection of the Pakistani army which include murders and rapes, and fighting against independence. Top leaders of the BNP like Salauddin Qader Choudhry are also indicted. The BNP, formed by late President Zia-ur-Rehaman in 1978 brought blacklisted JEI to the fore front of politics and as a partner. This is also seen as an anti-independence conspiracy.

The other important case in the courts now is the particular incident of attempted assassination of Sk. Hasina in 2004. Sk. Hasina escaped with injury, but 22 others died including Awami League leaders. Recent court hearing and cross-examinations saw witnesses from the intelligence apparatus reveal that Prime Minister Begum Khalida Zia, her elder son Tareq Rehaman who was Joint General Secretary of BNP, Junior Home Minister Luftozzaman Babar, Deputy Minister Pintu and others were co-conspirators in a plan to eliminate Sk. Hasina.

There is a third case under hearing in the Chittagong court is the illegal landing of 10 truck loads of arms meant for the Assam extremists, the ULFA, in the Chittagong port’s urea fertilizer jetty in 2004. A well planned operation accidently discovered by a patrolling policeman in Chittagong city opened the foul play. Again involved in the case were Tareq Rehaman, Luftozzaman Babar, the Pakistani ISI, JEI Amir Motiur Rehaman Nizami (then minister for fertilizers) and a handful of intelligence officers. ULFA’s Commander-in-Chief Paresh Barua was present in Chittagong that night.

Then Prime Minister Khalida Zia had repeatedly stated that the terrorist group Jamatul Mujahidin Bangladesh (JMB) and its leader Banglabhai, were a creation of media’s imagination,. She had to eat crow when under pressure from the US the top leaders of JMB were arrested in 2006. The same core group led by Tareq Zia gave protection to the JMB.

There were many other incidents of political execution by the BNP during their rule from 2001-2006.

Unfortunately, all these and other cases are going through at an inordinately slow pace in the courts. Time is of essence. If Bangladesh is to survive as moderate Islamic country, culprits at howsoever high level must be brought to book.

The West, especially the US, is playing a peculiar game in Bangladesh. Washington wants to show case it support to moderate Islamists and has treated the JEI as one. Once again the White House and the State Department continue to exhibit its ignorance of different cultures and history. Keep fingers crossed for the January 2014 elections.

As a footnote, the following should ring alarm bells. The Bangladeshi vernacular daily “Amader Orthonity” of October 07 reported that about 26,000 cadres and hundreds of suicide squads of the banned militant organization Hizbut-Tawhid were preparing to uproot the democratic system in the country and establish Sharia law. The banned JMB has formed a new organization called Jamatul-Arakan in cooperation with Rohingya militants who have come from Myanmar. A HUJI leader was recently arrested trying to recruit volunteers on behalf of its Pakistan chapter to fight in Kashmir.

There is more, but let us chew on this and ponder on what is on the horizon.

(The writer can be reached at e-mail [email protected])