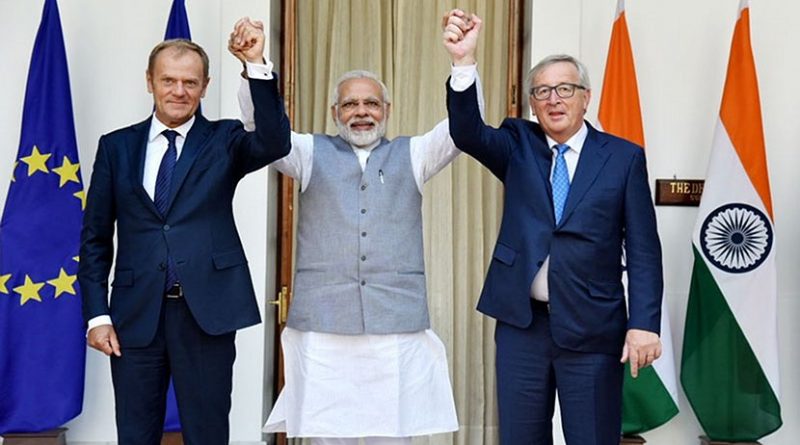 The summit with India marked the 55th anniversary since the establishment of EU-India diplomatic relations.

At the summit, leaders reaffirmed their commitment to further deepen and strengthen the India-EU strategic partnership.

They welcomed the progress made towards implementing the India-EU agenda for action 2020. This is the roadmap for bilateral cooperation endorsed at the previous India-EU Summit.

EU and India leaders strongly condemned the recent terrorist attacks across the world. They called on the global community to unite against the terrorist threat.

The EU and India also reaffirmed their commitment to further cooperate on maritime security in the Indian ocean and beyond. Leaders welcomed the resumption of tactical exercises in the Gulf of Aden between the EU’s Naval Force Operation ATALANTA and the Indian Navy.

Leaders called to end violence towards the Rohingya minority in Myanmar and to restore peace in the Rakhine state without any delay.

“The Rohingya people must be able to return voluntarily, in safety and dignity. We call for the implementation of the recommendations of the international Rakhine Advisory Commission to tackle the root causes of this crisis,” said President Donald Tusk at the press conference of the EU-India summit

Regarding the situation in the Korean peninsula, both sides condemned the nuclear test conducted by the DPRK on September 3. The EU and India called for the denuclearisation of the Korean Peninsula and for all UNSC sanctions to be fully implemented by the entire international community.

“The European Union, India and the whole international community have a responsibility to act with resolve for a peaceful denuclearisation of the Korean Peninsula,” Tusk said.

On the Iranian nuclear issue, India and the EU reaffirmed their support for the continued full implementation of the joint comprehensive plan of action (JCPOA).

On Ukraine, leaders underlined their strong support for a diplomatic solution through the full implementation of the Minsk Agreements by all parties.

EU and India leaders discussed the global migration and refugee crisis and agreed to coordinate closely.

Leaders reaffirmed their support to the UN reform agenda and their commitment to stronger global governance.

On climate change, leaders stressed their commitment to the Paris Agreement and agreed to step up cooperation on its implementation. The EU and India adopted a joint statement on clean energy and climate change.

The EU and India also reiterated their commitment to collaborate on common priorities to achieve the sustainable development goals.
Trade

EU and India leaders expressed their shared commitment to strengthening the economic partnership between India and the EU.

Leaders noted the ongoing efforts of both sides to re-engage towards relaunching negotiations for an India-EU broad based trade and investment agreement (BTIA).