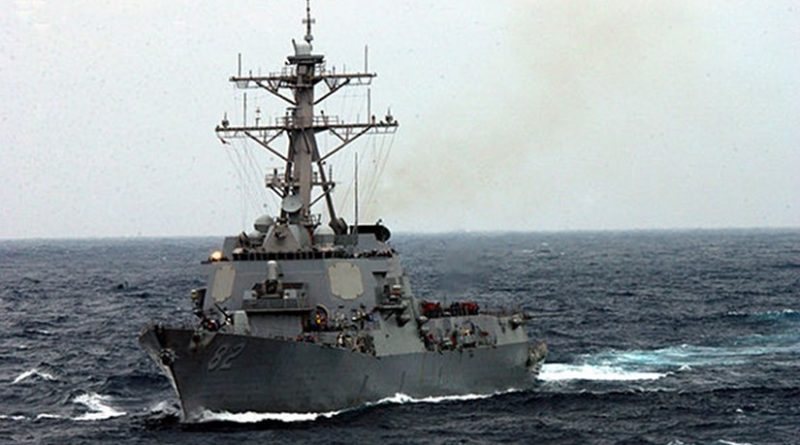 Tensions between the United States and China are on the rise again, this time as a result of the entry of an American naval vessel, the USS Lassen, into waters claimed by China in the South China Sea near the Subi coral reef among the Spratly Islands. Having constructed a base on the reef, which has now been transformed into an artificial island, and declaring twelve nautical miles of territorial water around it, China has declared the US vessel’s maneuver a provocative challenge to its sovereignty. Washington, on the other hand, claims that the ship’s passage fully complied with the principle of “freedom of navigation” as the vessel remained within legal boundaries defined by international law. While some pundits believe that the ongoing tension could escalate into an all-round conflict, it seems at the moment more likely for the two parties to compromise and preserve the status quo.

China is becoming increasingly assertive with respect to its claims over the South China Sea, which cover almost 80 percent of the maritime area. As a result, China’s relations with other littoral countries encircling the Sea have come under increasing strain. The South China Sea is of great economic value: most of the major global maritime routes cross through its waters, and it gives passage to an average of 5 trillion dollars worth of exports each year. The existence of untapped oil and gas deposits underneath the waters of the South China Sea is well known, and at the same time, it carries great value as a fishing source. China has recently taken its claims to a new level by carrying out land reclamation in the Sea’s contested waters, constructing airports and other civilian facilities on freshly developed coral reefs. It was one such reef that the USS Lassen passed by.

The United Nations Convention on the Law of the Sea (UNCLOS), which was signed in 1982 and entered into effect in 1994, defines waters up to twelve nautical miles from a country’s shores as territorial sea over which the country in question has complete sovereignty. Moreover, waters up to 200 nautical miles from a country’s shores are considered exclusive economic zones over which the country has no sovereignty yet possesses the rights to own the economic assets innate to the waters. China asserts rights to islands in the region on historical grounds, declares territorial waters around them and claims that since it has complete sovereignty over these waters, foreign vessels passing through them must obtain China’s permission. In this manner, China reacted to the USS Lassen because it considered the ship’s passage near the islands to be unauthorized.

Alternately, the US Department of Defense claims that USS Lassen’s navigation through the South China Sea should be classified as “innocent passage”, which is guaranteed by the UNCLOS. According to Article 17 of UNCLOS, “ships of all states, whether coastal or landlocked, enjoy the right of innocent passage through the territorial sea” under the condition that the passage “is not prejudicial to the peace, good order or security of the coastal state” and is “continuous and expeditious […] without entering internal waters or calling at a roadstead or port facility outside internal waters”. This is precisely the point on which the two sides cannot agree. According to the United States, the USS Lassen’s passage was innocent; according to China, it was not.

As it currently stands, the situation appears to have arrived at a deadlock, however, there are two more issues that should be taken into consideration. First, the Subi coral reef that the USS Lassen passed by was turned into an artificial island by China. According to Article 60 of the UNCLOS, coastal states have the right to construct and use artificial islands in their exclusive economic zones, however, the “safety zones” surrounding such islands may not exceed 500 meters. The waters around these islands are not recognized as territorial sea. From this perspective, regardless of whether its passage was innocent or not, the USS Lassen appears to have traversed, not through China’s territorial sea, but through international waters.

Second, it has to be noted that China has been effectively using the right of innocent passage itself. Last September, Chinese warships passed through the territorial waters around the Aleutian Islands off the Alaskan coast (which are natural, not artificial, islands) without experiencing a reaction from the United States as the passage was clearly within the confines of the principle of innocent passage. Having itself made use of this right, China is likely to refrain from overstretching its reaction to the USS Lassen’s passage, if only to avoid contradicting itself and therefore increasing the likelihood that it could be found in the wrong in similar cases in the future.

The United States certainly has a motivation behind its decision to have one of its warships sail near the Spratly Islands. As the official line goes, the maneuver was about defending the freedom to navigate; but at the same time, the United States is signaling that it remains a major actor in the Asia-Pacific while also trying to arouse renewed confidence among its allies in the region, most of which are having issues in sharing the South China Sea with China. While doing this, the United States is not directly challenging Chinese sovereignty, and this is very important. So far, the United States has not intervened in disputes over which waters and which islands belong to whom; it has not taken sides with any of the actors involved, including its own allies. This creates a relatively more acceptable situation for China, and ensures that channels of diplomacy remain open.

As this article was being written, a teleconference between the high commands of the American and Chinese naval forces came to a conclusion. What was discussed between the two sides and whether or not an agreement of some sort had been reached was not disclosed to the public. However, considering that China is itself benefiting from UNCLOS (and therefore able to further its claims up to a certain point), and that the United States has absolutely no interest in a direct conflict with China, one can expect that tension between the two countries will gradually fade away for the moment. Nonetheless, in the future we will most likely see more cases similar to those of the USS Lassen and Chinese warships’ respective passages through the Spratlys and the Aleutian Islands, albeit in a carefully monitored manner.

Home » What Is Going On In The South China Sea? – Analysis