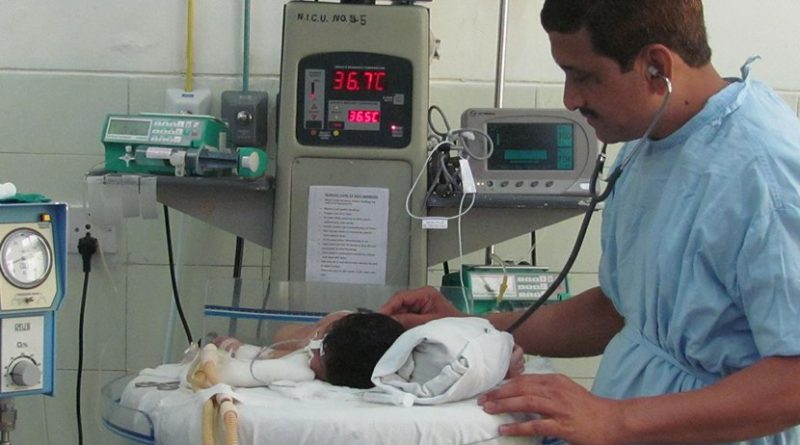 Professor Sangappa Dhaded attending to an infant in the Neonatal Intensive care Unit.

A new study published in Clinical Infectious Diseases journal reveals that 21.7 million pregnant women worldwide carry Group B Streptococcus (GBS) bacteria, a major, yet preventable cause of ill health of mothers and their infants globally. India, with over 2.46 million women leads the pack, followed by China: 1.93; Nigeria: 1.06; United States of America: 0.94; and Indonesia: 0.8(all numbers are in millions).

Sadly, most of these women do not undergo the tests to identify the infections. They do not get prompt treatment either. Out of 410,000 GBS cases identified every year, there will be at least 147,000 preventable stillbirths and infant deaths globally. We need urgent, energetic preventive action worldwide.

GBS bugs are truly secular. We find them among the pregnant women in all regions of the world, with an average of 18% of pregnant women worldwide carrying the bacteria, ranging from 11% in eastern Asia to 35% in the Caribbean, totalling 21.7 million in 195 countries.

The chilling reality is that though Africa has only 13% of the World’s population, it has the highest burden, with 54% of estimated cases and 65% of GBS-attributable stillbirths and infant deaths.

Currently, there is no vaccine to prevent GBS infection; a few are in development.

“This is despite the disease accounting for more than the combined neonatal deaths from tetanus, Whooping Cough, and respiratory syncytial virus, for which maternal vaccines are already in use, or further advanced in development.

A press release from the London School of Hygiene & Tropical Medicine (LSHTM) that led this humongous study with 100 researchers from around the world, stated that a maternal GBS vaccine which was 80% effective and reached 90% of women could potentially prevent 231,000 infant and maternal GBS cases.

The Bill and Melinda Gates Foundation is funding Prof. Dhaded to carry out another study of 18-24 months duration to find out the causes of stillbirths and preterm infant deaths.

“Understanding the cause of death will help in planning appropriate intervention to reduce the mortality,” Prof. Dhaded responded to my e-mail query.

To my question, “What are the difficulties India faces in containing GBS issues?”, Prof. Dhaded replied, “Because of the huge numbers of at-risk-pregnant mothers, control of infection related to GBS is difficult in the absence of routine screening. Moreover, each physician treating the mother suspected to have GBS may follow different approaches.”

According to Prof. Dhaded, the best way to move forward to identify colonized women is to have standard operating procedures.

I asked Prof. Dhaded, “How equipped are we at organizing diagnosis of GBS infection in pregnant women nation- wide?”

“I don’t think it will be a difficult task to identify pregnant women carrying GBS. The issue is, because of diverse health delivery systems, it may not be possible to implement an organized screening program,” Prof. Dhaded said.

“What were the efforts nationwide thus far?”

“I don’t think there is any definite program in India to identify pregnant women carrying GBS. However individual care-provider may undertake screening which may not make necessary impact, as it covers only a small portion of the eligible population” Prof. Dhaded replied to my e-mail query.

The team launched a Research Supplement on the study at the 66th Annual Meeting of the American Society for Tropical Medicine and Hygiene at Baltimore, Maryland, USA from November 5-9, 2017.

The study estimates that one in five pregnant women carry GBS. The Current GBS prevention focuses on giving antibiotics to women in labour, aiming to reduce disease in infants at delivery.

At least 60 countries have a policy for antibiotic use in pregnancy to prevent newborn GBS disease.

“Of those, 35 have a policy to test all pregnant women to see if they carry GBS, and the remaining 25 countries identify women with clinical risk factors. However, implementation of these policies varies around the world.” the release from LSHTM clarified.

Streptococcus bacteria are omnipresent. They belong to many groups including Group A and Group B.

Group A Strep lives comfortably on the surface of our skin and the inner side of our throat. They can cause diseases such as tonsillitis, sinusitis, cellulitis, sepsis, etc. and symptoms such as sore throat, scarlet fever etc. Mercifully, we can treat both the groups with antibiotics.

Gruesome Effects Of G B Strep In Pregnancy

The study showed that strep B bacteria colonize the vagina or digestive system of one in five pregnant women. These bugs may be passed on to the baby through the amniotic fluid (a liquid that surrounds and protects the unborn baby in the womb) or as the baby passes through the birth canal during labour.

A pregnant woman who tests positive for Group B strep bacteria and gets antibiotics during labor has only a 1 in 4,000 chance of delivering a baby who will develop group B strep disease, compared to a one in 2000 chance if she does not.

Since the immune system of newborns is immature, the GB strep bacteria can quickly spread through their body, causing serious diseases such as meningitis and pneumonia leading to stillbirths, and newborn and infant deaths. Surviving babies can develop permanent problems including hearing or vision loss, or cerebral palsy.

We can prevent these risks, if we can identify the possibility in advance. For this to happen, the mother-to-be must know the facts. A physician can ascertain the presence of the bug by testing the rectal and vaginal swabs. He should find out whether the mother- to- be has fever or other symptoms caused by Strep B infection and administer antibiotics. Such prompt intervention will reduce the risks.

A GBS vaccine for the mother -to-be, once developed, will reduce the risks further. The Central and State public authorities must not ignore the wakeup call, the study offers.

** CORRECTION: The article has been edited to properly label the headline, as “Group B Strep Infection Causes 147,000 Stillbirths And Infant Deaths Globally Every Year”.