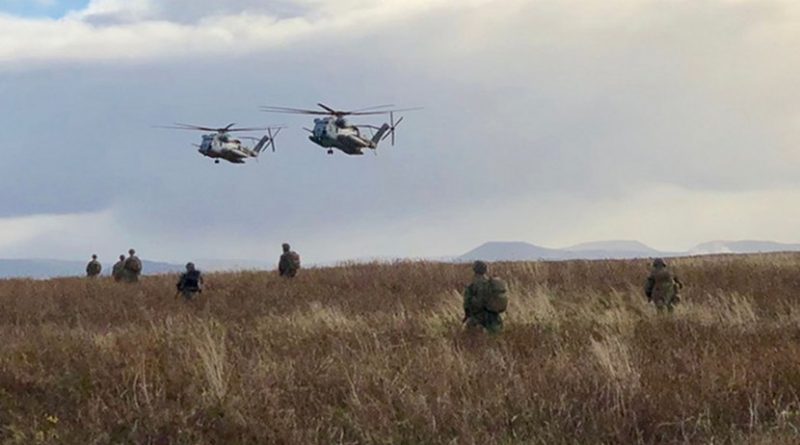 In late October, NATO launched Trident Juncture 18, its largest military exercise in years. It included about 50,000 troops from 31 countries, including all 29 members of the alliance.

This two-week exercise, which took place in and around Norway and concluded on Nov. 7, comes at an important time. It follows soon after Russia’s sprawling Vostok-2018 exercise along its eastern borders in September, which showed off how well the different branches of the Russian armed forces can coordinate operations. By staging the exercise in direct cooperation with Chinese military contingents, Russia signaled that the two superpowers are developing a closer strategic relationship.

As the most newsworthy exercise in a generation, Trident Juncture is an opportunity for NATO to showcase its own military prowess, which is especially important considering the increased tensions between the alliance and Russia since Moscow seized Crimea from Ukraine in 2014.

The exercises are also particularly important given the debates surrounding NATO’s utility and the commitment of its members. After US President Donald Trump brought the alliance’s June summit crashing down, members were left to contemplate their plans for the organization.

The participation of Sweden, which is not a member of NATO, and Norway in Trident Juncture highlights the Arctic focus of the maneuvers. The exercise is a good indicator of how the security situation in the Arctic and High North has changed. With the involvement of 65 ships, 250 aircraft and 10,000 vehicles, it is intended to be a show of force.

This enormous effort and the exercise’s Nordic location are not accidental; they reflect how badly the security environment in Northern Europe has deteriorated. As Russia has intensified its Arctic focus, it has militarized the area, revamping Soviet-era bases, building new ones and setting up a new Arctic command with new airfields and ports. It is also beefing up its fleet of about 40 icebreakers by adding nearly a dozen more, some of which are nuclear powered.

Confronting Russia in the Arctic is critical. The area is rich in resources and Moscow has not been shy about claiming or disputing the rights to those that might lie along its (or other nations’) continental shelves.

Russia also controls the North Sea Route; further global warming would allow ships to transit through this passage, shaving many days off their voyages. This gives the Russians significant strategic leverage in the region, but rather than promoting itself as a cooperative neighbor, it has encouraged Moscow to conduct cyberattacks in the region, violate the airspace of other nations, increase submarine activity and frequently harass Sweden, Finland, Estonia, Latvia and Lithuania near or within their own territorial waters.

Against this backdrop, neutral countries such as Sweden and Finland have become “Enhanced Opportunity Partners” to NATO, keen to buttress themselves against the Russian behavior. Sweden seems to be inching ever closer to full NATO membership, having announced that it will increase its military forces from 50,000 to 120,000.

Other regional countries, too, are re-examining their military strength in the Arctic. In the UK, for example, a recent parliamentary report titled “On Thin Ice” warned that British defensive forces in the Arctic should be strengthened, initially by sending Royal Marines for cold-weather training in Norway and integrating them into Norway’s defense plans.

Norway, conscious of the Russian activity, has also hosted US Marines for a similar purpose, with Iceland following suit in providing significant naval facilities for its NATO allies.

The involvement in such activities of countries such as Norway is important because it significantly alters the military balance in an area of great strategic importance for both NATO and Russia. The Arctic has always been a challenging military environment — Russia’s only aircraft carrier was damaged there last week — and it is therefore important that international forces practice and gain experience in such conditions.

The fact that the exercises have not only focused on the extreme weather conditions but also on cyber defenses and responses to critical infrastructure attacks is incredibly important in the context of Russian threats. Such a holistic and large-scale set of exercises is critical not only from the perspective of battle readiness, but also diplomatically. Showing an ability to counter Russian aggression is a central factor in being able to negotiate with a Kremlin that has been spurred on by a lack of global US leadership.

Such Russian aggression actually seems to be what has encouraged the newly invigorated NATO that has been showcased over the past two weeks during Trident Juncture. Though military exercises are temporary and do not necessarily lead to the political, economic and diplomatic choices that need to be made to confront threats, they are a key way for alliances to practice operating in unison.

NATO has played a central role in maintaining post-war peace and security and its capabilities must be updated if it is to retain its relevance.

* Zaid M. Belbagi is a political commentator, and an adviser to private clients between London and the Gulf Cooperation Council (GCC). Twitter: @Moulay_Zaid