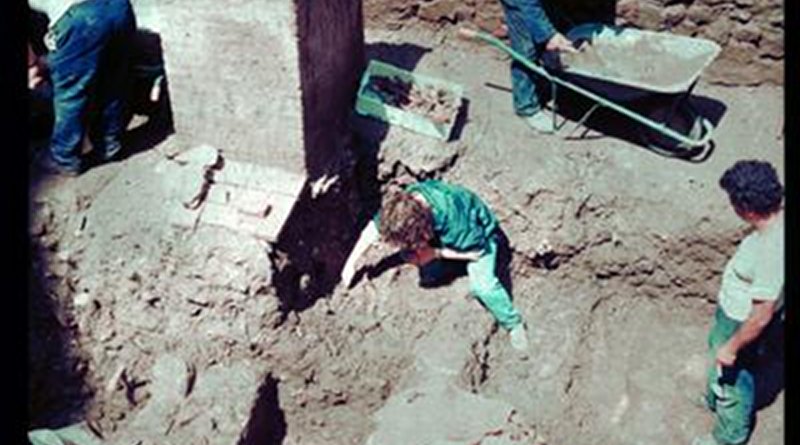 The excavation of the collective grave. All in all, researchers have collected DNA samples at 29 locations in Rome. CREDIT: © Michaela Lucci

The study, published in Science, focuses on the ancient DNA of individuals from Rome and adjacent regions in Italy, spanning the last 12,000 years. Those genetic data reveal at least two major migrations into Rome, as well as several smaller but significant population shifts over just the last few thousand years.

Notably, DNA analysis revealed that as the Roman Empire expanded around the Mediterranean Sea, immigrants from the Near East, Europe, and North Africa migrated to Rome, significantly changing the face of one of the ancient world’s first great cities.

“We did not expect to detect such an extensive genetic diversity already at the time of the origins of Rome, with individuals with ancestries from North Africa, the Near East, and the European Mediterranean regions”, says Ron Pinhasi, an associate professor of evolutionary anthropology at the University of Vienna and one of the paper’s senior authors along with Jonathan Pritchard, a professor of genetics and of biology and Alfredo Coppa professor of Physical Anthropology at Sapienza University in Rome, that together with Luca Bondioli, of the Museum of Civilizations of Rome, Mauro Rubini, of the Archaeological Superintendence of Lazio, and other anthropologists, conducted the sampling of the examined skeletons. “For the first time a study of this magnitude is conducted on a great classical civilization and is focused on Rome the capital of one of the greatest empires of Antiquity” declares Alfredo Coppa.

Rome presented an interesting opportunity to use the same ancient DNA techniques the team used in the last decade to fill in details left out of the historical record, Pritchard said. “The historical and archaeological records tell us a great deal about political history and contacts of different kinds with different places – trade and slavery, for example – but those records provide limited information about the genetic makeup of the population.” “Ancient DNA data provides a new source of information which is linked really well to social history of individuals from Rome at different ages”, says Ron Pinhasi. Alfredo Coppa adds, “In our study, we used the collaboration and support of a large number of archaeologists, who opened their archives to us, and allowed us to better understand what genetic data was highlighting.”

To find out what that makeup looked like, the Stanford team partnered with their collaborators in Rome and Vienna to gather 127 human DNA samples from 29 sites in and around Rome dating from between the Stone Age and medieval times. An analysis of some of the earliest samples more or less comport with what has been found around Europe – an influx of farmers primarily descended from early agriculturalists from Turkey and Iran around 8,000 years ago, followed by a shift toward ancestry from the Ukrainian Steppe somewhere between 5,000 and 3,000 years ago. By the founding of Rome, traditionally dated to 753 BCE, the city’s population had grown in diversity and resembled modern European and Mediterranean peoples.

Republic, Empire and beyond

But for the authors, the most interesting parts were yet to come. Although Rome began as a humble city-state, within 800 years it had gained control over an Empire extending as far west as Britain, south into North Africa and east into Syria, Jordan and Iraq.

As the empire expanded, it facilitated the movement and interaction of people through trade networks, new road infrastructure, military campaigns, and slavery. Contemporary accounts and archaeological evidence support tight connections between Rome and all other parts of the empire – in fact, the daily life of Rome relied heavily on trade goods from other parts of the empire to supply its enormous urban center.

The researchers found that the genetic corroborates but also complicates the historical record. There was a massive shift in Roman residents’ ancestry, but that ancestry came primarily from the Eastern Mediterranean and Near East, possibly because of denser populations there relative to the Roman Empire’s western reaches in Europe and Africa.

The next several centuries were full of turmoil: the capital’s move to Constantinople and subsequent split of the Empire, disease outbreaks that decimated the population of Rome and a series of invasions, including the Visigoth’s sacking of Rome in 410 CE, when, as Saint Jerome put it, “the bright light of all the world was put out.” These events left their mark on the city’s ancestry, which shifted away from eastern Mediterranean and toward western European. Similarly, the rise and reign of the Holy Roman Empire brought an influx of central and northern European ancestry.

Migration is nothing new

The study shows that the ancient world was perpetually in flux, both in terms of culture and ancestry.

“It was surprising to us how rapidly the population ancestry shifted, over timescales of just a few centuries, reflecting Rome’s shifting political alliances over time” Pritchard said.

Another striking aspect was how cosmopolitan the population of Rome was, starting more than 2000 years ago and continuing through the rise and dissolution of the empire. Even in antiquity, Rome was a melting pot of different cultures.

“We now need to think about new studies which look at the interaction between people of different social classes across the Roman Empire, including not only the movements of particular groups from different regions, but also of social mobility in both core regions, and the various provinces” says Ron Pinhasi.

“In addition to better analyzing relations with the pre-Roman peoples of central-southern Italy” adds Alfredo Coppa.