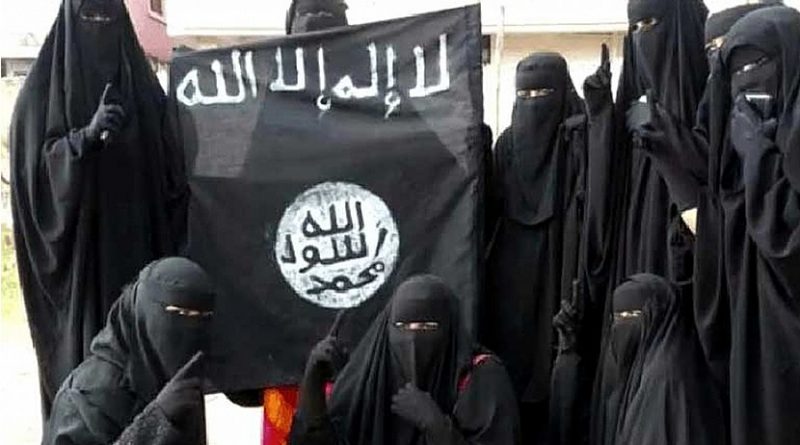 “Remaining and expanding” (baqiya  wa’tatamaddad) became the official slogan of Islamic State back in 2015, when its first territorial losses began to register.  It was quoted defiantly on Monday October 28, 2019 by an ISIS wife to journalists visiting the al-Hol holding camp, after US President Donald Trump had announced the death of self-styled caliph and leader of Islamic State, Abu Bakr al-Baghdadi.

Al-Hol, one of several such camps in north-eastern Syria, is where some 70,000 supporters of Islamic State – the equivalent of a moderate-sized town in the US or the UK – are retained.  It is crammed with tents housing the thousands of children and their mothers, most of whom remain fanatic supporters of ISIS. One woman, wearing a black abaya and face-covering niqab, told reporters: “Our faith will not change. The day of revenge will come, and the Islamic State will remain…Even if our men are captured, we are also soldiers of the Islamic State.”

This defiance is not unexpected.  Even before the Turkish incursion over the border into Syria on October 21, Al-Hol was awash with the violent ideology of ISIS, into which the children were being indoctrinated day by day.

ISIS women had turned one of the tents into a court that administered Islamic State’s version of Sharia law. In September  they found a 16-year-old girl guilty of apostasy. After the verdict was announced, women pulled knives from their black abayas and began stabbing her repeatedly.  Kurdish police intervened and bore her off to a clinic, but later she died.

Several other inmates have been attacked or killed by fanatical ISIS women. On October 1, Kurdish police stormed a tent and rescued two women who had been sentenced to death, and were about to be executed by stabbing.  The women fought back with knives and pistols. A Western observer who visited the camp in June reported that the foreigner annex of al-Hol “seems to hold a small core of organized and extremely militant women who plot and prey upon others…”   She said hard-line detainees were trying to maintain the cruel strictures of the caliphate inside the camp, including whipping women who were caught smoking, and encouraging their own children to beat up the children of those deemed unbelievers.

Abdul-Qader al-Ofeidly, commander of the Kurdish police force known as Asayish which guards the camps. told journalists that a raid in September had uncovered hand grenades and the body of a woman who had been killed by other detainees.

In recent weeks, detainees have stabbed a number of guards and beaten other residents to death.  Al-Hol, in particular, has been described as a “ticking timebomb”, and a “mini caliphate”.  Most such stabbings take place in a high-security area known as the Annex, home to some 10,000 hard-line women ISIS supporters from countries other than Syria or Iraq.  “Foreign women are trying to impose religious classes on all women in the camp,” said al-Ofeidly.

The Kurds have long warned that they cannot hold the prisoners indefinitely, and now say their forces are stretched thin as they send hundreds of guards as reinforcements to join the forces resisting Turkey’s incursion over the border. They have also halted operations against ISIS, which continues to stage attacks in Syria and Iraq.

The Kurds in north-eastern Syria are administering not only holding camps, but a number of prisons detaining ISIS fighters.  A few days after some of its Kurdish guards had left, more than 100 ISIS detainees escaped from one of the prisons.  Shortly afterwards hundreds of ISIS wives also fled nearby camp Roj.  On October 11 dozens of residents in al-Hol attacked an exit gate in an apparent escape attempt before Kurdish security forces brought the situation under control.  Video from a closed-circuit camera showed security forces chasing women in black robes through the center of the camp.

The Kurdish-controlled Syrian Democratic Forces (SDF) are struggling to maintain order both in holding camps and prisons. The ISIS leadership, spurred on by the death of al-Baghdadi, is exploiting the chaos to mobilize its adherents, men and women. The remaining guards at al-Hol have been attacked and had petrol poured over them, while the body of a 10-year-old child was found in a backpack, guards told a visiting journalist.

Meanwhile at the Ain Issa camp, home to some 13,000 women with suspected links to Islamic State and their children, at least 750 people are reported to have fled.  After Turkish shelling struck close to the area on October 13, they began to riot and scared away the guards. Jelal Ayaf, the co-chair of the camp’s management, said sleeper cells within the civilian section emerged during the riot, and attacked the remaining guards.

Western countries, including the US and the UK, have refused to repatriate citizens who joined ISIS, fearing they may not have enough evidence to convict them in criminal courts.  Kurdish police force commander, al-Ofeidly, maintains that it is the foreign women who are the main threat in the camp, and echoes calls by Kurdish leaders for their home countries to take them back.  Continued inaction by the West on this front may soon result in the very outcome prophesied by the women zealots of Islamic State – ISIS will remain and it will expand.