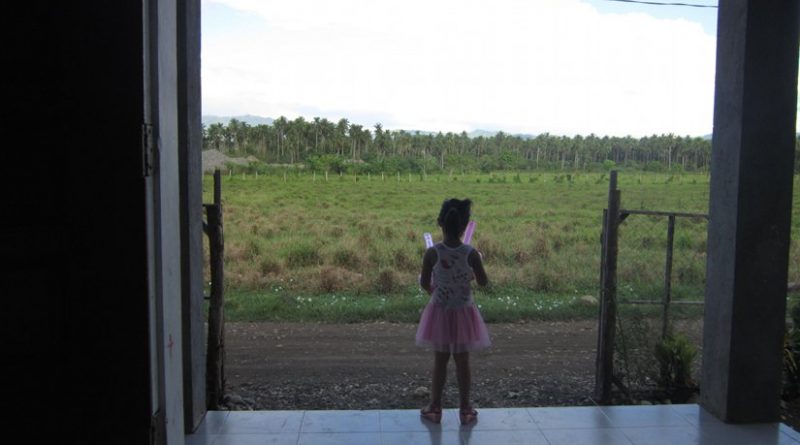 A child in the Philippines.

I was born and raised in Baguio City,  Philippines, at a time when it was more rural than anything else like a city. My great grandmother lived with us so we were taught to raise chicken, a few pigs and grew some fruit trees from avocados, guavas, cherries, to coffee. I came to know the mountains, the trees, the land, the springs where guppies thrived and green turtles perched on rocks for sunbath. I came to know of edible plants and poisonous ones. Of herbs and wildcrafting, not to mention, supposedly haunts of spirits that guarded the land and hills.

I hiked every ascent of the city and came to know where swallows lay their eggs on rock crevices, where owls peered at daytime and where the sweetest water flowed from a treasured and secret brook. I walked on the land every summer day and never got bored. Today, even as I live several miles where I was born, I still walk the land. There is always something new to see and learn. Even if I sit on my terrace overlooking trees, plants and a pond, I get to see something new and revealing.

Just the other night, I woke up hearing a rustling at the the eave of the veranda and upon going out, was surprised to see a big bird roosting at a ledge where I keep my honey. I did not know what kind of bird it was, but it must have been very tired as it just sat and slept even with my flashlight on its feathery face.

Now and then as I write on the small table outside the bedroom window at night, all sorts of insects come, flutter, invited by the lights. Some hover over my lamp, one or two come close to the laptop and find time to sit..wondering what I was doing on the keys that don’t pay them no mind.

My bees are my regular guests. When I wake up at 2 or 3 am to write liking the chilly wisp of cold air, I disturb them, they come out from their hives and go round and around the light. And all around me too. All I do is sit still. They come and feel who I am and they let me be, never stinging or bothering me. They may think me nuts for being out past graveyard shift instead of being fast asleep but they let me be. So I ignore them as well.
Sometimes I feel they hanker for talk but that people just don’t listen or attempt to listen to them. Which makes me feel a bit guilty becuase I always proclaim the earth is alive but am short most often than not in feeling that life.

The bees, birds and insects are alive. So are plants, flowers, grass and the trees. How many of us really look down to see if these are alive?

Researches have proven that trees, flowers, weeds and grasses know more that what we know. The smell of a newly-cut grass, for instance is actually the smell of pheromones sent out by the grass. It is threatened, calling to pollinating insects. But we don’t hear it as that because we don’t know.
Do trees have consciousness, emotions, intelligence? Some researches say yes, others are quite about it, those who don’t care say no. We may never know because research is busier making bombs, beauty creams, poison and thinking of how people can become rich, instead of understanding the creations of the world.

To me, they’re alive and they matter. The realization of the aliveness of the non-human is the crack in the paradigm, a shift from understanding nature as passive, unfeeling, and mechanical, to seeing the non-human all around us as aware, a huge something in which we, as humans, participate but can never control, that we can study, become aware of, learn about and find many patterns of translation. The assumption that plants and animals have no feelings was made by science hundreds of years ago, for convenience.

Whether I am in my garden tending to the soil or vegetables, raising seedlings or planting trees, I know that I am with life and a certain degree of communication exists, binds and exist in an unsaid dynamism. This act of translation between human and non-human happen everyday, to each and everyone of us. Unfortunately, our conscious lives are unaware of it. Everywhere, in small ways, such translation continues.

To say that plants and trees have no feelings is cultural assumption. It has no scientific basis. This assumption makes it easier to experiment on animals, easier to exploit them, hunt them, or use them as a “resource.”

This kind of thinking has resulted in the snarled mix of contradictions, beliefs, sentimentality, superiority, and fear with which humans continue to regard and portray the non-human world.

There are researches that examined plants and animals for ‘intelligence’ and revealed positive results in many new and surprising ways. Such research is finding that certain animals and plants are far more ‘intelligent’ than anyone had ever even guessed. However, intelligence is the wrong word. Consciousness is the wrong word. But science doesn’t have the right words. We have no language because plants and animals are not like humans. Such comparisons are habitual but not useful.

Nevertheless, evidence continues to grow showing that animals are smarter than humans have ever understood them to be.

Among plants and trees, they have great great sensitivity computing complex aspects of their environment and change behaviour to optimize fitness within their local environment. They can anticipate changes in weather, climate, temperature and even danger. They are also very generous, more generous than humans.. Nitrogen fixing trees sleep and fold their leaves at night and release water which they don’t need so other plants and trees and make use of the water.

Plants and trees communicate with each other through networks, warn other plants of danger, call for help, feed other plants, or put out pheromones to attract particular insects.

And even as I walk now, I am far from understanding everything what plants and trees tell us. They have been here for millions of years, they know history far more than us, if we get to know everything they have seen and experienced, it may help some of our problems now. On every walk now, a particular insect or bird flies by. I am not sure I interpret them fairly. What kind of knowledge do they have of us? Over generations, birds remember that people harm them. Trees know that people will cut them and the grass knows that man will burn them to nothingness.

The biggest, most profound and most revolutionary shift we could move to now is to live in a world where saying hello to the tree, grass, weed or any plant is a sign of deepest respect and an acknowledgment of our own lack of understanding and knowledge. Greeting a butterfly or bee buzzing by and thanking the soil and water for the life they give us.

But more than saying hello, it is acknowledging that life they have which gives us life. —- to acknowledge the limits of translation, to acknowledge our own unknowing and to acknowledge our own naivity. We are part of the world, and the world is within us as we are within an alive and enormous network of being that looks back at us. To perceive this is at once so profound and also simple. It begins with the most obvious everyday things around you. The most radical thing you can do is to look down, look around, say hello and then begin to learn what that means.

You can start doing that now.

Home » Trees, Plants, And Insects Speak To Us – OpEd