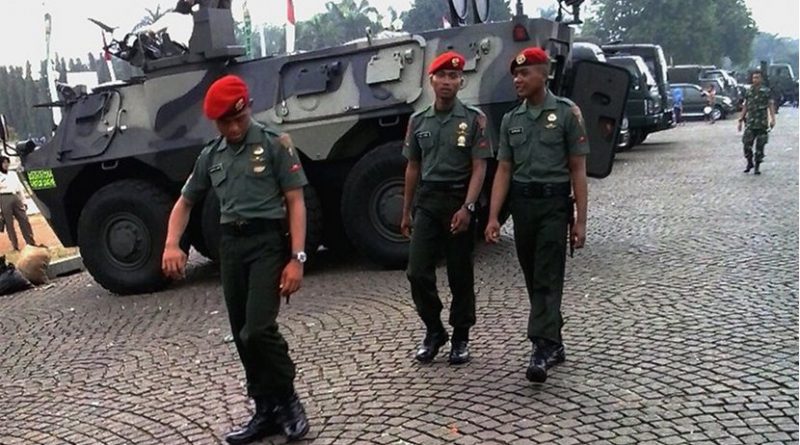 Indonesian counter-terrorism police on Monday announced the arrests of seven members of the nation’s two main Islamic militant networks through “pre-emptive” raids carried out during the past few days.

Officers with the elite Densus 88 unit arrested five suspected members of al-Qaeda-linked Jemaah Islamiyah (JI) at separate locations in Banten and neighboring Lampung provinces in a series of raids from Friday through Sunday, police said.

One of those arrested was identified as Ahmad Zaini, JI’s leader in Lebak regency in Banten, provincial police spokesman Edy Sumardi said.

“The arrests were part of pre-emptive efforts,” Edy told BenarNews but declined to elaborate.

The four other JI suspects, identified only by their initials – SA, S, I, and RK – were picked up in Lampung, national police spokesman Brig. Gen. Awi Setiyono said. He said they belonged to the JI branch in Banten, and three of them were with Adira, the group’s martial arts training wing.

In July, Para Wijayanto, the overall JI leader, was sentenced to seven years in prison for his involvement in terrorism, including sending Jemaah Islamiyah members to Syria.

Indonesian authorities said JI members were behind a series of terrorist attacks in Indonesia since 2000, including two bombings in Bali – which killed a total of 225 people in 2002 and 2005 – and the 2004 Australian embassy bombing, which killed nine.

The suspects were captured in the city of Payakumbuh in West Sumatra province and on Batam, an island in Riau Islands province near Singapore, and were identified by their aliases, Abu Singgalang and Abu al-Fatih, police said in a statement.

Since June, Indonesian police have arrested more than 80 JAD and JI suspects. Last month, police took four JI suspects into custody in Bekasi, a town just east of Jakarta, including one who had allegedly fought in Syria.

In August, Densus 88 members caught 15 suspected JAD members in Bekasi and Jakarta, including one whom police said had assisted the travel of Indonesians to Syria.

Sidney Jones, an expert on Islamic militancy in Indonesia, said that despite having regional bosses, JI’s leadership structure was unclear after Para was imprisoned.

Para restructured JI – al-Qaeda’s affiliate in Southeast Asia – after he assumed leadership of the organization following an Indonesian court ruling in 2007 that banned the group, according to court records.

“In the past, even after the top leader had been arrested, they could not just officially appoint a new emir,” Jones told BenarNews, adding, that a successor must have deep religious knowledge and military experience.

Recent arrests of JI members have affected the group significantly, though it is unlikely that JI will cease to exist any time soon, said Jones, director of the Jakarta-based Institute for Policy Analysis of Conflict (IPAC).

“It is possible that all JI activities have been suspended, except for the pesantrens. JI still operates a network of pesantrens, mostly in Central Java. So it’s likely that regeneration is happening there,” Jones said, referring to Islamic boarding schools.

Jones said she believed that security authorities were concerned about the possible emergence of JI splinter groups that resort to violent acts.

“If we look at history, JI emerged with its ‘splinter’ groups,” she said while naming Noordin M. Top, the militant responsible for masterminding the Jakarta Marriott hotel bombing in 2003.

Noordin, a Malaysian national, was killed in 2009 during a stand-off with police in the Central Java city of Solo.

“It seems that what the government is worried about is that JI will suddenly resort to violence and bombings,” Jones said. “It is possible that some of the dozens who were trained in Syria came back and emerged with a splinter group that is opposed to JI being as passive as it is today.”

Police said JI, under Para’s leadership, sent dozens of members to Syria between 2013 and 2018 for military training and to study how the IS implemented its teachings. Jones said some of these JI members were captured in Syria by IS because they refused to pledge allegiance to Abu Bakr al-Baghdadi, the top leader of Islamic State.

Others left for Syria to train with Islamist opposition forces such as Ahrar al-Sham, the Free Syrian Army and the al-Nusra Front, she said.

Earlier this year, analysts Zachary Abuza and Alif Satria said JI was the Indonesian Islamic militant group most likely to take advantage of the COVID-19 pandemic and economic downturn that have struck Indonesia.

“By 2019, JI was the strongest it had been since its decline in 2011, running a large network of preachers, corporations, mosques, and plantations,” the pair wrote in The Diplomat on June 23.

“JI’s resilience lies in its resources, centralized organizational capacity, and experience in providing social services beyond its immediate constituency, at a time when an armed campaign against the state is deemed counterproductive,” they added.

Abuza is also a contributing columnist for BenarNews.