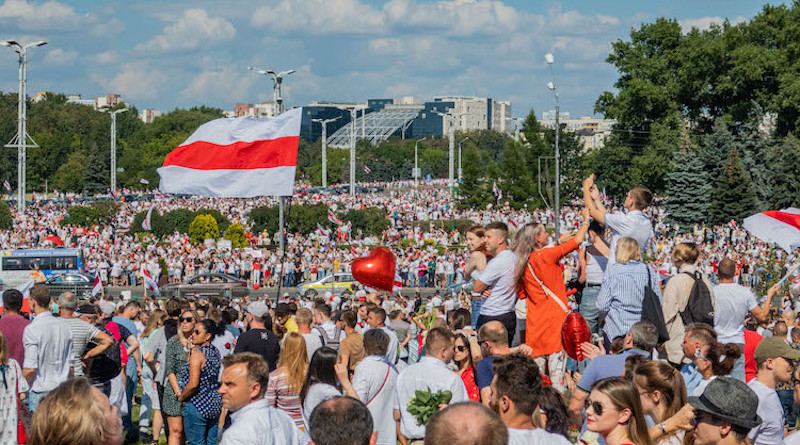 The ongoing political crisis in Belarus began after the presidential elections held on 9 August 2020. When the incumbent president-autocrat Alexander Lukashenko who has been in office for twenty-six years had claimed a landslide victory, which many perceived to be an electoral scam, the mass protests began.

The regime responded with mass repressions unseen before even in authoritarian Belarus. Mass arrests and the unprovoked brutality to which the peaceful protesters were subjected, were imposed by Lukashenko’s regime to induce extreme fear and terror, but it actually had the opposite effect. Since then, hundreds of thousands of Belarusians have been taking to the streets for many weeks. People demand the resignation of the long-time ruler, release of all political prisoners and arrested protesters and new, transparent and free elections.

Despite the broad international condemnation of the repressions and Lukashenko’s re-election not recognised by the West, the autocrat has not shown any intention to give in to the demands or negotiate with the opposition leaders – all of whom were either arrested or deported.

In such circumstances, Lukashenko did not have any other choice than turn to his ‘frenemy’ patron Russian president Vladimir Putin. For two decades Lukashenko enjoyed the benefits of being a client of his powerful neighbour, but yet he fiercely resisted the imperial intents of the Russian autocrat to incorporate Belarus into the Russian Federation.

However, given the substantial dependency of the Belarusian economy on Russia and the current economic and financial crisis, Lukashenko seemingly has no choice but to trade off the country’s independence for the support of his shaking throne. For Putin, it is the perfect opportunity, but at the same time, it seems like Kremlin understands the risks involved with the immediate and open adsorption of Belarus. Undoubtedly, that would also further alienate the West and turn Belarusians away, a decisive majority of which oppose joining Russia.

Lukashenko himself, however, has become a ‘lame duck’ and in the medium and long term would be more of a liability rather than an asset for his Russian patron. Certainly, Putin would do anything to prevent the Belarusian people from overthrowing their long-standing autocrat as that would send the wrong signals to his own people. Most likely, Putin prefers a managed transition of power within a year or two to a new leader he could trust, meanwhile supporting Lukashenko to clamp down on the protests.

Some hints given away by both parties may suggest the quite possible scenario upon which Lukashenko, given no other choice, had to agree. Such strategy, firstly, would envisage the implementation of a constitutional reform leading to a significantly stronger parliament at the expense of a weakened presidency and creation of a quasi multi-party system.

Meanwhile, the leading national enterprises should be privatised by Russian oligarchs close to Vladimir Putin, thus further increasing dependency of Belarusian national economy on Russia. The political reform would culminate in the resignation of Lukashenko and the new presidential elections. Therefore the authoritarian regime would be replaced by a hybrid one or as the Russians call it a ‘managed democracy’. In such a system, the Kremlin would be creating and bringing to power both the new president and parliament using numerous hybrid methods in which the Russians are so proficient.

The process has already started as numerous Russian propagandists arrived in Belarus to replace those journalists who in protest to the regime’s brutalities resigned or were fired from the state TV stations and other media. Other ‘specialists’ from Russia have inundated Belarusian cities and towns assisting the local authorities to suppress the local anti-government activities using indirect methods, such as blackmail or intimidation, rather than the brutal force.

The Russians have also started building relationships with the middle and the low-level regime’s bureaucracy which they see as the cadre base for the future pro-Russian political forces, which until now were not allowed by Lukashenko’s regime. If these, loyal to Russia forces succeed, they could incorporate Belarus into the Russian Federation de facto first and then de jure at a later stage.In such a scenario of a creeping occupation, Belarusians may come to realise it too late, when they wake up one day as the citizens of the other country.

Such a hybrid annexation would also strengthen the power of Putin in Russia, something he currently needs so badly as his popularity recently remarkably decreased. It is due to a very unpopular pension reform, the country’s economic decline, a farcical constitutional reform and his handling of the pandemic.

Given that after the Chechen war and annexation of Crimea Putin’s popularity amongst the country’s population skyrocketed, it would be reasonable for him to expect the same again if he would have managed to annex Belarus.

Such a scenario, however, could be averted if Belarusians become more aware of a potential deal arranged by the two autocrats behind their backs and continue the resistance, both to the regime and creeping annexation by Russia. In their resistance, the people of Belarus will need serious support from Western democracies, which should become more aware of the seriousness of the Kremlin’s revanchist intentions, which, apparently, became the personal geopolitical mission of president Putin and which he openly and repeatedly declared and acted upon in several occasions.

Home » The Crisis In Belarus And Its Potential Geopolitical Outcomes – OpEd