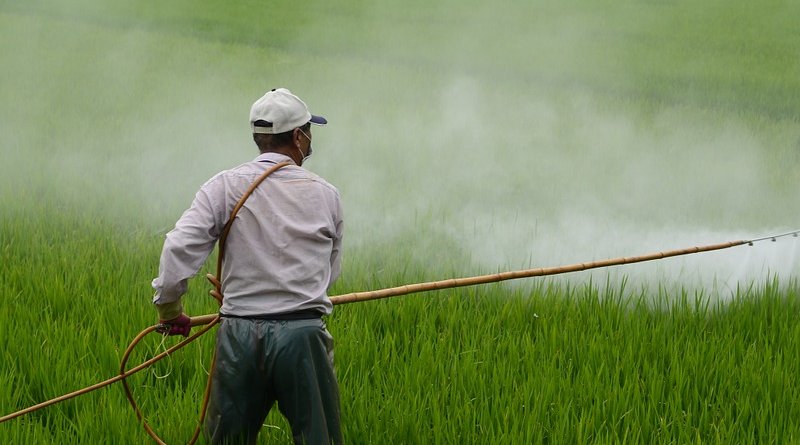 Larsen and her colleague Frederik Noack, at the University of British Columbia, analyzed 13 years of data from Kern County, California — which consistently tops lists of the nation’s most valuable agricultural counties — and discovered that less diverse croplands led to greater variability in pesticide use as well as to higher peak pesticide application. Their findings appear in the journal Nature Sustainability.

The idea that greater diversity stabilizes an ecosystem emerged around the 1940s, relatively early in the development of ecology as a field. The theory has encountered some skepticism throughout the years, and there’s recently been a resurgence of interest in investigating this relationship.

Kern County provided a fantastic opportunity for the two researchers to study the phenomenon; in this case, how changes in crop and landscape diversity affect populations of crop pests.

“The U.S. has seen a shift toward larger agricultural enterprises,” said Larsen. “So instead of small family farms we now have much bigger agricultural conglomerates.” That has accompanied the trend of increasing field size and decreasing crop diversity. She suspects these all relate back to farmers taking advantage of the economy of scale.

Although Kern keeps extensive agricultural records, no one tracks the populations of pests, per se. This meant the researchers had to use a proxy: insecticide use. Only later did they appreciate how much this decision expanded the implications of their findings.

“Once you introduce insecticides into the study, then it’s not just about diversity and stability in this ecological theory,” Larsen said. “Now it has implications for environmental impacts and food security.”

Larsen and Noack scoured the county records from 2005 through 2017 focusing on factors such as field size, as well as the amount and diversity of croplands. What they saw seemed to sync with their predictions. “We find increasing cropland in the landscape and larger fields generally increase the level and variability of pesticides, while crop diversity has the opposite effect,” the authors wrote.

As field size increases, the area gets larger more quickly than the perimeter. This means that smaller fields have proportionally larger perimeters. And a larger perimeter may mean more spillover from nearby predators like birds, spiders and ladybugs that eat agricultural pests.

Smaller fields also create more peripheral habitat for predators and competitors that can keep pest populations under control. And since the center of a smaller field is closer to the edge, the benefits of peripheral land in reducing pests extends proportionally farther into the small fields.

Landscapes with diverse crops and land covers also correlated with reduced pesticide variability and overall use. Different crops in close proximity foster a variety of different pests. Though this may sound bad, it actually means that no single species will be able to multiply unimpeded.

“If agriculture is very simplified, there’s little stopping a big outbreak of one type of pest,” Larsen said. “If you’re a pest in a monoculture, and that’s your host crop, you have almost unlimited food resources.”

Larsen and Noack’s findings immediately suggest strategies for increasing food production while minimizing the impact of pesticides on human health and the environment. The study could not only help farmers make more informed decisions about field size and crop diversity, but also guide policy with the aim of decreasing insecticide use.

The Department of Agriculture’s Farm Service Agency oversees several conservation-related programs addressing a number of different issues, including habitat preservation. Larsen suggests that tailoring these efforts to the nuances of different crop types could provide even greater benefits.

What’s more, these voluntary programs currently focus on efforts by individual farmers. “Based on our results, we need to think, ideally, at more of a landscape scale,” Larsen said.

It’s difficult to untangle confounding factors in the relationship between land use and insecticide use. For instance, farmers put a lot of thought into how they plant their crops, potentially planting more valuable crops in larger fields or less diverse areas, Larsen explained. At the same time, farmers invest more in pest control, including chemical pesticides, for these high value crops, making it hard to tease apart the effect of landscape characteristics from these difficult-to-observe decisions.

The authors addressed these concerns using a combination of techniques borrowed from the economics literature in an attempt to establish a more causal understanding of the relationship between landscape characteristics and insecticide use.

California produces a diverse array of high-valued crops, from grapes and berries to almonds and citrus. This contrasts with regions like the Midwest and its amber waves of grain. Fields of cereals, like corn and wheat, can extend across vast swaths of the American heartland in virtual monocultures. What’s more, these crops aren’t nearly as valuable on a per-acre basis.

All these factors influence the risks associated with pests and the economics of pesticide application. “So it’s hard to say whether these results would translate well to areas with very low value cropland because the incentives to really scout your pests might be much lower,” Larsen said.

She has continued to investigate the effects of land use on agricultural production at both regional and national scales. In a recent paper published in the journal Landscape Ecology, she evaluated how both changing land use and climate may impact insecticide use throughout the U.S. While both are expected to increase future insecticide use, crop composition and farm characteristics are highly influential.

Unfortunately, national data does not provide the same high-resolution information as Kern County, Larsen explained. She plans to continue her work to bridge the detail and scale gap to better understand how land use impacts agricultural pests and pesticide use.

Home » The Ecology Of Crop Pests