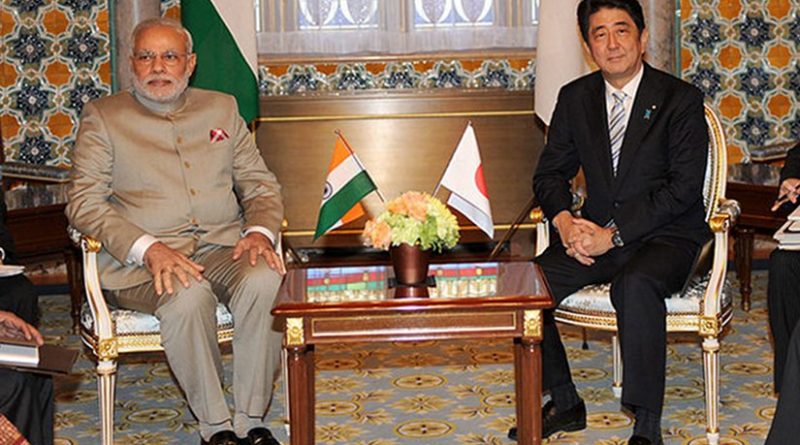 Last September when Prime Minister Modi visited Japan, India and Japan upgraded their bilateral relations to ‘special strategic and global partnership.’ The 56 point long Tokyo Declaration issued on 1 September, 2014 after the summit meeting could be regarded as a blue print for future collaboration between India and Japan.

The Declaration incorporates areas such as infrastructure, investment, energy security, agriculture and food, regional connectivity, defense and maritime security, science and technology, and people to people exchanges. The biggest take away from the summit meeting was Japanese pledge to invest around $34 billion in India within a span of five years and 480 million dollars in infrastructure loans to India.

Since then, the Indian Prime Minister has met Japanese Prime Minister Shinzo Abe couple of times – on the sidelines of the G-20 summit in Antalaya, Turkey on 14-15 November; at East Asia Summit in Kuala Lumpur, Malaysia on 21 November, and again at the sidelines of the CoP-21 conference in Paris on 1 December 2015. During the sidelines of the 13th ASEAN summit in Malaysia, Abe hosted a special luncheon for Modi, and Modi in turn tweeted that it’s ‘always a delight’ to meet PM Abe. Modi invited Japan to be part of the ‘Make in India’ programme, and a whole bunch of issues including regional connectivity, maritime security and the South China Sea disputes were also discussed.

Abe showed personal interest in expanding the ‘Special Strategic and Global Partnership’ with India and remarked that ‘the India-Japan relationship has the greatest potential of any bilateral relationship in the world.’ During the CoP-21 meeting, Ministry of External Affairs Spokesperson was quick to tweet that ‘Whether Kuala Lumpur or Paris, Tokyo or New York [Modi] always [had] time for good friend Abe Shinzo.’ It is in this background that the Japanese Prime Minister is visiting India for the Annual Summit talks on 11 December. It is the 9th Summit between Indian and the Japanese Prime Minister that will take place on 12 December.

During the upcoming summit between Modi and Abe, there are indications that both will take stock of the overall relationship including the Japanese commitment of investing $34 billion in infrastructure, connectivity, transport systems, smart cities, manufacturing, clean energy and skill development. Though Japan has been providing Yen loans to India since 1958, and has remained largest aid donor of India, however, the trade and economic relations between India and Japan have remained abysmal in the light of sheer market size of India and Japan’s capital accumulation as well as technological advancement.

Bilateral trade in 2014 was a meagre $16.31 billion and FDI around $2 billion. Nevertheless, the trend is encouraging as more and more Japanese companies have been seen moving to India. According to the website of Indian Embassy in Tokyo, as on December 2014, there were 1209 Japanese companies registered in India, constituting an increase of 13% over 2013 figures; total number of Japanese businesses operating in India stood at 3961, a rise of 56% compared to the year before. There is a possibility that the first hi-speed rail connecting Mumbai and Ahmadabad will be formally given to the Japanese as the feasibility studies have been completed in this regard. It is expected that Japan will finance most of the project.

It is perhaps the defence and security cooperation that has seen a quantum leap in recent years. The summit is likely to consolidate these ties and open new avenues for cooperation. Early in October this year, Japan was invited to participate in the Malabar naval exercises, which India holds bilaterally with the US. During Modi’s Japan visit last year, the Indian side expected a breakthrough in the civil nuclear cooperation as well as the purchase of US-2 amphibious planes, but nothing substantive happened, albeit both sides directed the concerned departments to move ahead with the negotiations on these areas. This time again, even though S Jaishankar India’s Foreign secretary, and Ajit Doval, National Security Advisor were in Japan to address these issues, it appears that civil-nuclear deal with Japan will be a non starter. Nuclear issue remains very sensitive in Japan’s domestic politics, and externally Japan has been insisting on nuclear disarmament around the world. On 7 December, the U.N. General Assembly formally adopted a Japan-sponsored draft resolution calling for the abolition of nuclear weapons that encourages world leaders and youths to visit the atom bombed cities of Hiroshima and Nagasaki, albeit without the backing of P5 of the UN.

Notwithstanding the hitches, some understanding as regards the civil nuclear cooperation between the two cannot be ruled out. Moreover, as India has raised the private equity in defense industry to 49%, there may be joint research and development of defense related technology in future; Japan lifting the ban it imposed on 6 defense enterprises in the wake of 1998 nuclear explosion is an indication that the cooperation in defense sector is likely to be strengthened. Space cooperation is likely to be high on the agenda, as both India and Japan plans to send manned and unmanned mission to moon in near future. Both sides are likely to exchange views on missile shield as well.

Another area could be cooperation and sharing of information on global counter terrorism. India has been pitching for adopting a Comprehensive Convention on International Terrorism globally, which aims to criminalize all forms of international terrorism and deny terrorists, their financiers and supporters access to funds, arms, and safe havens. Yesterday, Japan launched a new counterterrorism unit, which intends to expand Japan’s international espionage on terrorism. Therefore, cooperation between similar mechanisms in India is very likely.

Science and technology is another area where two sides are likely to deepen their cooperation. Theme based projects are already underway between Japan Science and Technology Agency (JST) and India’s Department of Science and Technology (DST). Between 2006 and 2012, the JST and DST collaborated on various projects related to information and communication technologies (ICT). Presently both are focussing on biomedical research.

Finally, on cultural and people to people exchange front, Modi will accompany Abe to Varanasi, the sister city of Kyoto. A partnership agreement facilitating cultural exchanges between the two cities was signed during Modi’s Japan visit. Following the agreement, a Steering Committee on Kyoto-Varanasi Cooperation was formulated. During the first meeting of the committee in January this year, several areas of cooperation were identified, some of these are on the lines of Kyoto initiatives such as: conservation of culture, radical changes in town planning, drastic reduction in garbage generation and enhancing the appeal of city’s cultural visibility through measures like banning outdoor advertisements, river front development, bio-energy applications and bio-fuel development, waste to energy, life cycle greenhouse gas inventory of household waste, application of Ozone to municipal sewage treatment and waste water treatment etc.

It would not be surprising if the Japanese Prime Minister announces a moderate economic package to overhaul the Lok Sabha constituency of Prime Minister Narendra Modi. However, given the hazardous air quality index of the city, Abe will have to put on mask if he wishes to go to the city at all.

*B R Deepak is Professor of Chinese and China Studies at the Centre of Chinese and Southeast Asian Studies, Jawaharlal Nehru University New Delhi. The views are solely his own.