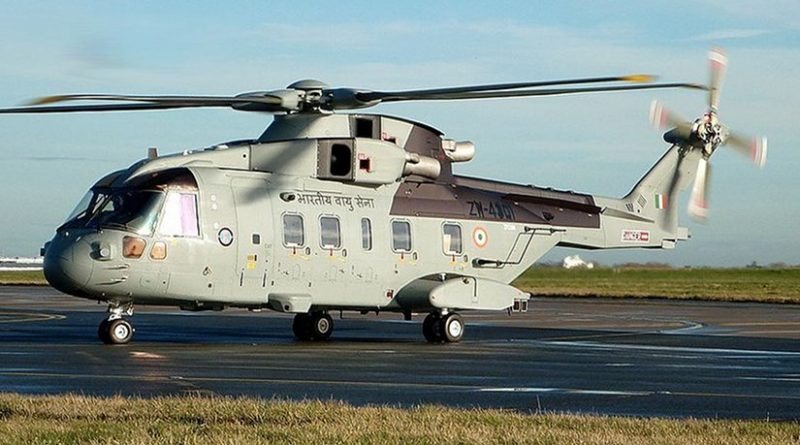 For the first time in the history of India’s armed forces, former Indian Air Force Chief S P Tyagi and two others were arrested by the central bureau of Investigation (CNI), which is investigating the Rs 3,600-crore AgustaWestland VVIP helicopter deal case. It is indeed a black day for the armed forces, which prides itself as a non-corrupt organization.

Investigators from Italy first alleged that the Tyagi brothers received bribes to swing the deal in favor of AgustaWestland, a wholly owned subsidiary of Finmeccanica, by tweaking technical requirements of the tender. Tyagi and others are to be produced before the court today.

CBI spokesperson Devpreet Singh said that it was alleged that the Chief of Air Staff (CAS) entered into criminal conspiracy with other accused persons and in 2005, conceded to change IAF’s consistent stand — that service ceiling of VVIP helicopters 6,000 metres was an inescapable operational necessity — and reduced the same to 4,500 metres. Such changes in operational requirements, Singh said, made the private company (AgustaWestland) eligible to participate in the request for proposal for VVIP helicopters.

The UPA government had signed a contract with AgustaWestland International Ltd (AWIL) in 2010 for supply of 12 AW 101 VVIP helicopters at an aggregated price of Rs 3726.96 crore. The government cancelled the deal in January 2014 “on grounds of breach of the pre-contract integrity pact and the agreement” by AWIL.

The CBI has alleged that Indians were paid bribes of Rs 362 crore to swing the deal in favor of AgustaWestland. In the probe it was found that bribes were allegedly paid through a complex web of companies and middlemen based in Italy, UK, Tunisia, Mauritius, Singapore, British Virgin Islands, Switzerland and the UAE. Letters rogatory were sent to these entities and, sources said, the BVI and Tunisia have “partially replied”. The Enforcement Directorate (ED), also investigating the case, also filed chargesheets against Khaitan and alleged middleman Christian Michel.

In 2014 the Italian court investigating the chopper scam had named former chief of the IAF, SP Tyagi in the scam, saying he was bribed by Finmeccanica to sign the deal with AgustaWestland. In 2015, however, Tyagi was acquitted by the Italian court, which said there was no corruption by Indian officials.

The IAF had urged the defence ministry to purchase helicopters capable of flying in high-altitude areas like Siachen and Tiger Hill. After careful evaluation of the AW101, it was ascertained that it was not capable of flying at 6,000 metres above sea level. The alleged middleman in the deal, Guido Haschke, revealed that while AW101 did not meet the technical requirements of the IAF, the deal was signed after Haschke tweaked the contract with the help of his Indian contacts.

The Milan court also took note of conversations between the three middlemen — Carlos Gerosa, Christian Michel and Guildo Haschke — who mention a ‘Mrs Gandhi’ as being the driving force behind the VIP, and her close aides Ahmed Patel and Pranab Mukherjee. In a letter dated 15 March, 2008, Christian Michel wrote to Peter Hulet, the then head of India region sales and liaison for AgustaWestland, saying, “Dear Peter, since Mrs Gandhi is the driving force behind the VIP, she will no longer fly with MI8. Mrs Gandhi and her closest advisers are the aim of the High Commissioner, senior adviser Prime Minister Manmohan Singh obviously the main figure, then there’s Ahmed Patel Secretary.”

The UPA government had then denied all allegations and had claimed it had nothing to hide.

AgustaWestland allegedly paid €30 million in bribes, of which €20 million was routed through Haschke and Carlo Gerosa. A CBI report that came in later said that prior to Tyagi’s appointment as Air Force chief, the IAF had “vehemently opposed” lowering of the altitude requirement. This changed after Tyagi came into the picture and the IAF conceded to reduce altitude requirements, allowing AgustaWestland to re-enter the bidding process.

The Indian armed forces has prided itself in being a non-corrupt organization serving the nation. The arrest of a former Air Force Chief is a big black spot on the armed forces.

With input From agencies