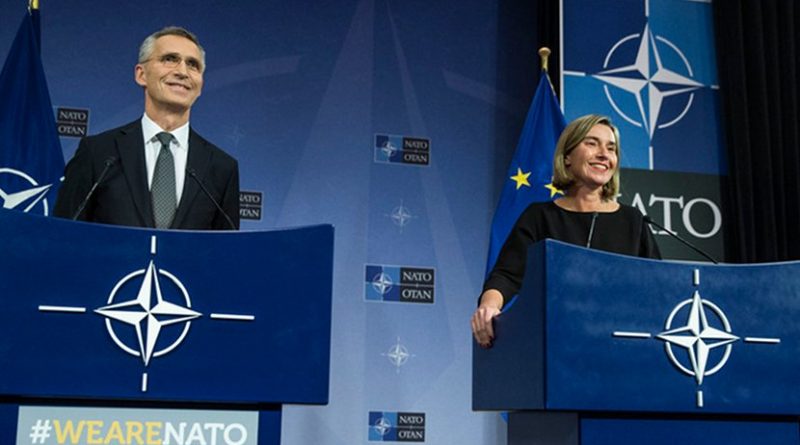 In spite of persisting differences, some three weeks later, Foreign Ministers of the North Atlantic Treaty Organization (NATO) and the EU have agreed to step up the U.S.-led Alliance’s cooperation with the EU. Explaining the move, EU High Representative and Vice President Federica Mogherini, told journalists on December 5 that the European Union comprises 28 democracies that maintain with the United States “not a relationship of alliance but of partnership and friendship”. NATO, said Secretary General Jens Stoltenberg, is “an alliance of 29 different nations, democracies,” with “very often different views on different issues”.

The new areas of NATO-EU cooperation will include: military mobility, information sharing in the fight against terrorism, and promoting women’s role in peace and security. “We are taking cooperation between NATO and the EU to a new level,” Stoltenberg told journalists.

“So we are taking cooperation between NATO and the EU to a new level. This is more important than ever, as the EU looks to strengthen European defence, through Permanent Structured Cooperation and the European Defence Fund,” he said.

“To ensure these efforts complement what NATO does, we must keep in mind some key principles: EU and NATO capability development must be coherent. Because we cannot present conflicting requirements and priorities to our nations. Forces and capabilities must be available for both EU and NATO. And non-EU Allies need to be involved to the fullest extent possible. Because they play an important role in European security,” Stoltenberg added.

At the PESCO signing ceremony on November 13, Mogherini said: “This is a historic moment in European defence, which just one year ago, most of us and most of the rest of the world considered impossible to achieve.” “Today 23 Member States are engaging to work jointly both on defence capabilities and operational steps, and more may wish to join at a later stage.”

She said she would work to ensure the Council decision launching the PESCO by the end of the year. It will allow those member states willing and able to jointly develop defence capabilities, invest in shared projects, or enhance the operational readiness and contribution of their armed forces.

The joint notification on European defence is the first formal step to set up the PESCO. It sets out:

– The principles of the PESCO, in particular underlining that the “PESCO is an ambitious, binding and inclusive European legal framework for investments in the security and defence of the EU’s territory and its citizens”

– The list of “ambitious and more binding common commitments” the member states have agreed to undertake, including “regularly increasing defence budgets in real terms in order to reach agreed objectives”, and

– Proposals on PESCO governance, with an overarching level maintaining the coherence and the ambition of the PESCO, complemented by specific governance procedures at projects level.

On taking cooperation between the Brussels-based North Atlantic Treaty Organization and the EU to a new level, Stoltenberg explained, the “NATO has ensured European peace and security for almost seventy years. And remains the cornerstone of our collective defence,” adding: “At the same time, we are determined to further strengthen our cooperation with the EU.”

Stolenberg and Mogherini were asked what they made out of the German Foreign minister Sigmar Gabriel’s “comments that U.S. leadership is crumbling, that the U.S. seems to see Europe as a competitor rather than a partner sometimes and is pursuing policies that might be hurting its allies rather than helping.”

Stoltenberg said: “Well, Minister Sigmar Gabriel also stated very clearly that he doesn’t see European defence as an alternative to NATO. He’s strongly in favour of a strong transatlantic bond, and that’s exactly the message from Federica [Mogherini] and from me. This is not about creating something which is going to compete with NATO but this is something that is going to be complementary and to strengthen NATO.”

He added, despite disagreements also about issues related to foreign policy, environment, trade, and many other issues, “the strength of NATO is that we have been able again and again to prove that despite of these differences we are always able to agree on the core task of NATO, and that is that we are there to protect each other, that our collective defence is the best way to ensure peace, and Article 5, the collective defence clause, that an attack on one ally will trigger a response from the whole alliance. And I know that Sigmar Gabriel is very clear on this, as is all other allies.”

The NATO Secretary General added that the United States is actually increasing their presence in Europe. “We have more troops, we have more equipment, we have more U.S. exercises now. After years of decline after the Cold War the U.S. has started to increase their presence and they’re also increasing funding for the European Deterrence Initiative to close to US $5 billion.”

So the United States “is not leaving Europe, actually it’s coming back to Europe, also with Canada, and I welcome the leadership of the United States in the alliance, and . . . Secretary Tillerson . . . reiterated his ironclad commitment to the alliance – the U.S. ironclad commitment to the alliance . . . we are an alliance of 29 democracies, sometimes there are different views, but we agree on the core task that we are there to protect each other,” concluded Stoltenberg.

EU High Representative Mogherini accentuated: “On the European Union side obviously we are in a different position because we are a political union of 28 also democracies and we have with the United States not a relationship of alliance but of partnership and friendship. And this is a common basis that unites us not only for our history but also for the future perspectives of trying to handle together some of the challenges the world is facing and trying to get some of the opportunities the world is offering. And this is still the solid basis of the transatlantic friendship and partnership between the European Union and the United States.”

Mogherini added: “There are many issues on which we [EU and NATO] work together and if we were not working together the security situation in large parts of the world would be much worse than the one we’re facing today. If you think of DPRK, if you think of Afghanistan, if you think of Syria, and I could continue, Libya, some crisis in Africa, and again I could continue a long list, counterterrorism, anti-Daesh, Ukraine, and again the list is long, there are many files on which our cooperation is vital and is achieving results.”

There are other areas on which the European Union and the United States have different positions on foreign policy, Mogherini admitted. One is the nuclear deal with Iran where the European Union and its member states have made very clear that for them “it’s a strategic priority that matters to our security, a nuclear deal that is working and that has been certified nine times by the IAEA as working, needs to be preserved – especially as we’re facing another nuclear proliferation crisis further east.”

It’s a strategic priority also for the overall credibility of international negotiations and agreements. “And the message was heard I think loud and clear in Washington, and I think that today we are in a better place when it comes to the commitment to stay compliant with the agreement and work together to keep Iran compliant with the agreement, which is our major common work to be done.”

Migherini added: “We have a difference of views when it comes to multilateralism and in particular the UN system. We are as the European Union the strongest supporters of the UN system and a rules-based global order that includes investment in UN peacekeeping, something we share by the way with another transatlantic partner that is also very much a friend, Canada, but also for us this involves trade and the upcoming WTO ministerial next week in Argentina will also be a test for the way in which we see international relations.

“This was evident on the climate change agreement. Well, I was personally saddened, and this was also shared today [December 5] by other European Union member states’ ministers, that the United States decided to leave the Global Compact of the United Nations on Migration and Refugees, we believe and we invest in multilateral mechanisms and systems and we wish to do this more and more with the United States. This is the way we take to foreign policy and security policy as well.”

Referring to another issue of difference, Mogherini said: “we in Europe believe that the only perspective for peace and security for Israel and Palestine is the two-state solution, not [out] of idealism but out of experience.

“We believe this is the only realistic option for both and the for the region, and we are in good company in believing that, and namely the Arab Peace Initiative that we still believe is a useful framework for finding a solution to the crisis, to the conflict, is still a very useful framework, as we believe that any move that could derail the possibility of re-launching talks, for instance moves around Jerusalem, would be detrimental in immediate terms and in the perspective of reopening a diplomatic process in the Middle East.”