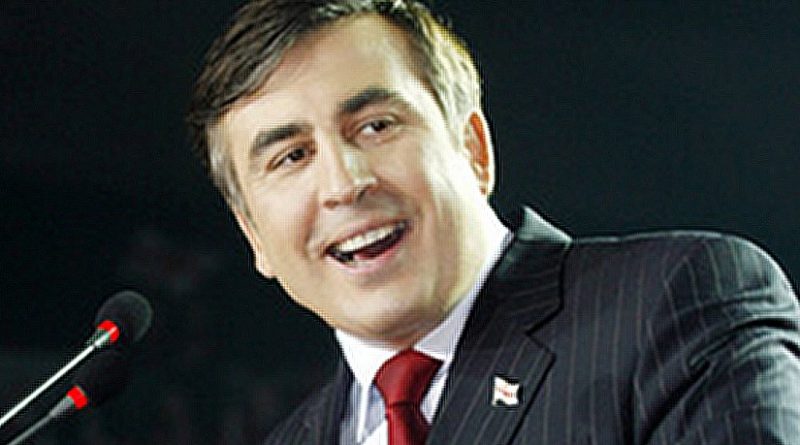 Attorney Ruslan Chornolutskiy released a letter from Saakashvili calling on supporters to protest in Kyiv on December 10 and to call for the impeachment of President Petro Poroshenko.

Also on December 9, a spokesman for the Prosecutor-General’s Office said prosecutors would ask a court to place Saakashvili under house arrest with electronic monitoring pending trial.

Ukrainian officials have accused Saakashvili of abetting an alleged “criminal group” led by former President Viktor Yanukoych — who was pushed from power in 2014 and fled to Russia — and have suggested that his protests are part of a Russian plot against Ukraine.

Saakashvili has dismissed the claims.

Saakashvili was arrested in the Ukrainian capital late on December 8, prompting hundreds of his supporters to demonstrate for his release.

The firebrand activist’s supporters gathered in a narrow street outside the police station where he was taken late on December 8, not far from the parliament building, shouting “Shame” and “Kyiv, get up!” while a large number of police in riot gear stood guard.

Close ally and fellow Georgian David Sakvarelidze called on Kyiv residents to take to the streets to protest Saakashvili’s recapture, which he blamed on President Poroshenko.

“Today Poroshenko broke all records and went down in history as a dictator who does this to political opponents,” Sakvarelidze told TV channel NewsOne.

Three associates of Saakashvili told RFE/RL that he was arrested at a friend’s apartment where he was visiting earlier on December 8. Sakvarelidze said the agents were from the state security agency SBU.

Prosecutor-General Yuriy Lutsenko said in a post to his Facebook page that “everything was done to avoid bloodshed.”

“The detainee is placed in a temporary detention facility,” he wrote.

Hours earlier, Saakashvili called on Ukrainians to demonstrate in Kyiv on December 10. In a Facebook post, Saakashvili told supporters he had lost his voice and was running a temperature but would “be by your side again” at a midday march to Kyiv’s Independence Square, which was the site of the months-long 2013-14 protests that ousted the country’s pro-Russia president.

Saakashvili, who became governor of Ukraine’s Odesa region in 2015 but quit a year later and is now a vocal opponent of Poroshenko, thanked backers for their support in the tumult of recent days.

Law-enforcement officers searched Saakashvili’s apartment in Kyiv on December 5, dragged him off the roof, and bundled him into a car. But supporters blocked the streets and pulled him from the vehicle, and he led a march to parliament.

A day later, police raided a protest tent camp near parliament, but Saakashvili was not detained and a 24-hour deadline for him to turn himself in passed without visible action by the authorities.

The search of Saakashvili’s home was conducted two days after his Movement of New Forces party organized a rally in Kyiv calling for Poroshenko’s impeachment and for legislation that would allow it to take place.

Poroshenko late on December 8 said international experts may help justice officials investigate the charges against Saakashvili, adding that he was sure Saakashvili would get a fair trial in Ukraine.

“I don’t exclude that the inquiry may ask for extra expertise, including from international organizations, to enhance trust,” Poroshenko told reporters during a visit to Vilnius to meet with Lithuanian President Dalia Grybauskaite.

Saakashvili “has to answer to investigators and to society regarding the accusations against him,” Poroshenko said. “If he doesn’t answer, it only means that these accusations are well-founded.”

“If he flees from the investigation, this undermines his credibility,” Poroshenko said.