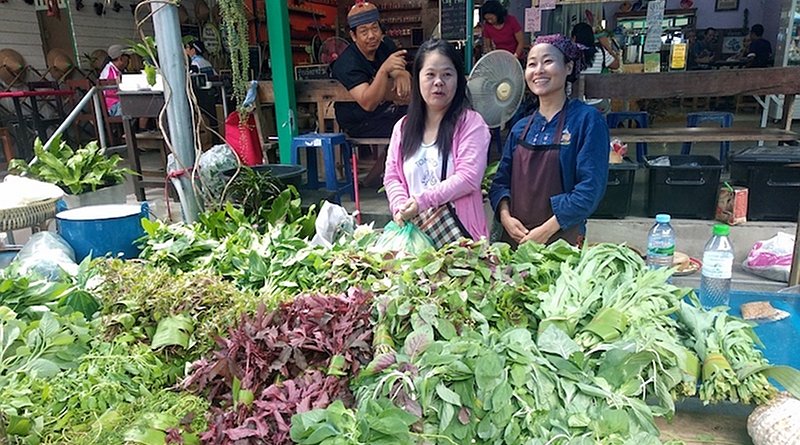 Farmers selling their vegetables and fruits from organic farming at a modest profit in the weekend market. Credit: Kalinga Seneviratne

On a Saturday morning a couple drives into the Santi Asoke community in the north-eastern outskirts of Bangkok, and walks into a large warehouse stacked with clothes, shoes, books, electrical goods, mobile phones, washing machines, furniture and other household items. The couple inspects a stack of clothes scattered on a mat, picks some up and puts it in a basket. It is then taken to a volunteer cashier, who weighs it and quotes a price.

“People donate whatever they don’t need. We have no set price. They will come and collect the pieces they want to buy, like in wholesale, and we quote a price,” explained community leader Samdin Lersbusway, while taking Lotus News on a tour of the community.

“The shop sells everything from clothes to air conditioners. Things that cannot be sold directly, we repair and sell. We also recycle paper, plastics and sell to recyclers,” he added. “Anyone can donate stuff to us. Sometimes we get new goods from the rich.”

Taking a lift to the third storey of a multistorey block we visit the modest facilities of Santi Asoke TV station where only their Liaison Officer Thongkaeo and her cameraman – a student – was present. They don’t have a station manager or a program manager, but they broadcast 24-hours a day on satellite and when the need arises live on Facebook and LINE. Its operations are coordinated by the Liaison Officer.

A recorded feature was being broadcast when I visited them.

“We have run the TV station for 10 years. We work as a family,” says Thongkaeo, adding, “I plan schedules, do interviews, arrange visitors to be interviewed, and during school term students help us.” She invites me to take part in a discussion with her about Lotus Communication Network with the help of an English interpreter. But, before we start the interview she points out, “we may be the only TV station in the world where no staff is paid. All staff has to be multitalented”.

Samdin adds further that they work on the basis everybody-works-for free and the money they earn from their labour goes to a central fund which is managed by the Santi Asoke community. They have seven communities across Thailand, with the largest one – and their headquarters – in Ubon Ratchathani in north-east of Thailand near the Laos border.

Santi Asoke was founded by Bodhiraksa, a famous television entertainer in the 1970s, who became a monk in the early 1980s. He was not happy with the behavior of many monks who were non-vegetarian and involved with black magic rituals. Thus, he left the temple with a group of followers and set up a third sect of monks outside the control of the State. They became an outlawed sect in the tightly controlled Thai clergy.

But, when Santi Asoke member Major-General Chamlong Srimuang was elected as the Governor of Bangkok in 1985 and later showed interest in joining national politics there was a systematic campaign to demonise the group. “Chamlong was extremely popular as a Governor, regarded as a ‘Mr Clean’, who lived modestly according to the Asoke teachings, ate one vegetarian meal a day, rejected tobacco and alcohol, and did not gamble or visit night-clubs,” noted Mahidool University Professor Marja-Leena Heikkila-Horn in a study on Santi Asoke.

Chamlong had a potential to clean up the corrupt political establishment of the kingdom with a Buddhist moral movement that could appeal to the population, where 95 percent claim to be Buddhist.

“In order to prevent Chamlong from taking to the national stage in politics, his Buddhist affiliations needed to be declared illegal,” explains Prof Heikkila-Horn. “Bodhiraksa was detained in June 1989 and all the Asoke monks and nuns were detained for one night in August 1989. A court case was filed against them that year; it lasted until 1996.”

The economic crisis of 1997, where excessive greed and borrowing was identified as the root cause of the problem, stocks of Santi Asoke began to rise, because they have always been critical of greedy capitalism and promoted the concept of Buddhist economics known as bunniyom (meritism).

“The purpose of having a business here is not to make money. We make contacts in doing business to practice the dhamma (virtues),” says Samdin. “Business here is viable because people want food. Take little profit so that they can continue to take a little wage.”

He was explaining this principle to Lotus News while walking through their weekend market where the farmers (who don’t use chemical inputs in their farms) sell their vegetables and fruits at a modest profit. There were also a number of vegetarian restaurants that were ‘selling’ meals virtually for free.

An Indian vegetarian restaurant run by a Thai chef was giving food free of charge to monks, nuns and residents of the lay community here who have to come before 10.30 am to eat. “Other people pay. They may also leave a donation to give one a free meal,” chef Glang Din explained, pointing to keys on a noticeboard he said, “key is on a board to show how many free meals are available. If you want to get one, take a key and give it to me for a free meal. Anyone can do it”. He added that if you donate 4,000 Bhat (USD 130) “I will give free meals for the day to everyone who wants a meal here”.

At the height of the economic crisis in 1998, the late Thai King Bhumibol Adulyadej famously advised Thais to follow a ‘sufficiency economics’ model of contented economic self-reliance. This was what Santi Asoke has been practicing since its inception.

When business tycoon Thaksin Shinawatra came to power in 2001, Santi Asoke got the opportunity to preach their economic ideal to the rural masses. He delegated to Santi Asoke the government-financed training of tens of thousands of indebted farmers in Asoke centres. Farmers came in groups of about 100 and stayed for five days. They learnt about organic farming, recycling and reusing, and were obliged to listen to sermons on the virtues of vegetarianism and bunniyom.

Each Santi Asoke community, like the centre here, whose leafy 7 acre property is surrounded by creeping high rise buildings of developers, has in addition to the warehouse, the market space and restaurants, two multistorey apartment buildings housing lay followers, kutis (cottages) for monks and nuns, a school building, a health centre, departmental store selling mainly organic and herbal products, and a 4-storey unfinished temple in concrete with an artificial water fall behind a Buddha statue. They have been constructing the building in stages for 30 years, “when we have money to do it” says Samdin.

Interestingly, they don’t have the large Buddha statues and lavish shrine rooms Thai temples normally have. “Our community has 3 sections – temple, school and community. All 3 are integrated,” says Prouputt Kaodura, English interpreter for the community.

“We don’t worship Buddha the way others do. Buddha statues remind us of his teachings. It’s not true that we don’t respect Buddha,” she adds.  Chipping in Samdin says, “Buddha statues means 3 things to us – about worldly things, being knower of the world, having compassion”.

Thus, the rooms and floors that surround the Buddha statue are areas for retreats, classes, conference rooms, meeting rooms and a library. “It is a place for people to work, a very practical path,” says Prouputt.

“The Santi Ashoke communities are self-sustained Buddhist communities. Monks and people live according to the teachings of Buddha and they have developed a system of sustainable living,” says Thai television producer Pipope Panitchpakdi who has reported on the community many times.

“It is something good for today’s world facing climate change and political divisions, etc,” he says, pointing out that because Santi Asoke believes that capitalism is against humanity, the commercialized mainstream media shuns them.

* A video documentary on the Santi Asoke community can be viewed on Lotus Comm Net https://www.youtube.com/watch?v=ooQHk16Owlc

This article is the 37th in a series of joint productions of Lotus News Features and IDN-InDepthNews, flagship of the International Press Syndicate. Click here for previous articles.