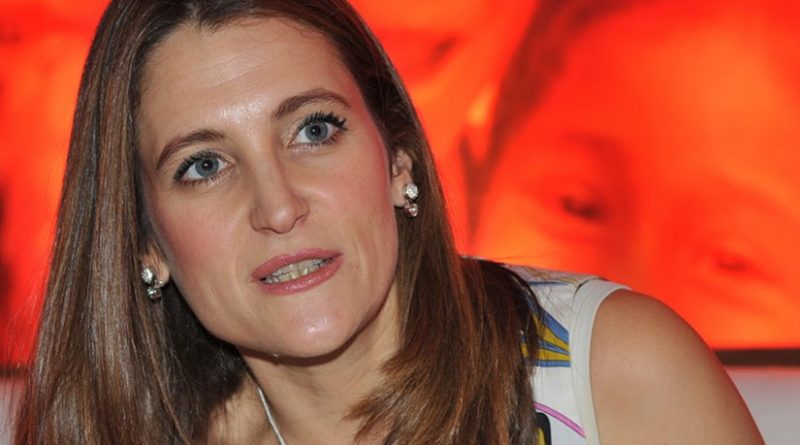 (RFE/RL) — Canadian Prime Minister Justin Trudeau on January 10 appointed Chrystia Freeland, a critic of Russia who has been sanctioned by Moscow, as the country’s new top diplomat.

Freeland, who is of Ukrainian descent, has been a harsh critic of Russian President Vladimir Putin.

Moscow barred Freeland from entering Russia in 2014 as part of a series of retaliatory sanctions against Canada in response to Ottawa’s blacklisting of many Russian officials to punish the country for its annexation of Crimea.

Freeland tweeted afterward: “It’s an honor to be on Putin’s sanction list.” In 2015, she wrote an article for Quartz magazine entitled “My Ukraine, and Putin’s big lie.”

Trudeau in announcing Freeland’s appointment as Foreign Affairs Minister, sidestepped a question from reporters over whether her rocky relationship with Russia would have an impact.

Freeland, who once lived in Moscow during her career as a financial correspondent, said whether she will be able to travel to Russia as foreign minister was not up to her.

“That’s a question for Moscow,” she said. “I am a very strong supporter of our government’s view that it is important to engage with all countries around the world, very much including Russia.”