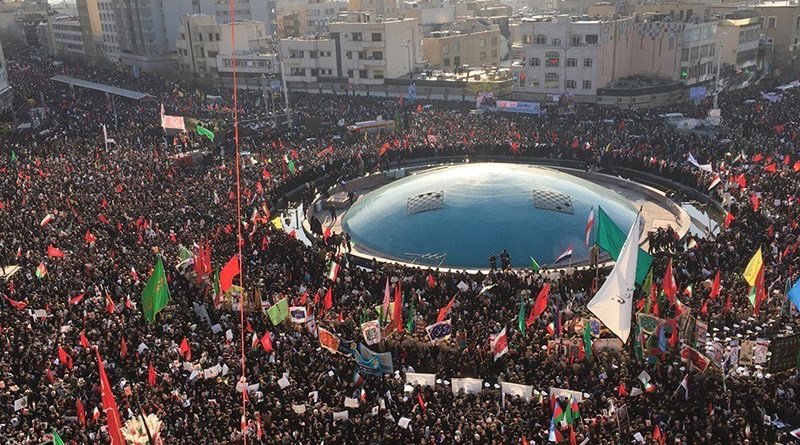 With The killing of Qassem Soleimani, Iran supreme leader  Khamenei lost his most important handler and lever in the middle east region. Khamenei did not say anything at the funeral, he just cried. Khamenei, at great expense, tried to drive around the casket of this butcher of people, who also made 6 million Syrians homeless, in the city of Mashhad, Ahwaz, Qom, Tehran, and Kerman. Government propaganda for the funeral of this criminal is reminiscent of Hitler’s fascist propaganda in June of 1942 for Reinhardt Heidrich, the main organizer of the Holocaust. Like Heidrich, Suleimani was a cruel executioner and right-hand man of his leader.

Tricks for gathering crowd for Qassem Soleimani’s Funeral were despicable.

Qassem Soleimani’s death is a significant blow to the Islamic Republic militarily and politically. However, the Regime wants to cease this occasion for propaganda and wants to pick up the fruits of its investment by kick-starting its extensive and expensive project of making a hero out of him.

The Regime asked students at the Iran’s University of Sanaye to attend Khamenei’s prayer at the body of Qassem Soleimani at the University of Tehran, in order to get a passing marks in their courses. Government centers, schools, and colleges were closed.

The regime in a formal statement mentioned it would pay for the free trip, breakfast, lunch, and dinner in order to bring a larger crowd to the burial ceremony in Shiraz.

A  witness from Varamin south of Tehran said: “The crowd you see at the funeral is because the regime has closed all schools and offices. 1000 servings of food were given to the hungry people, and the hungry people ate the food and left early, and there was no one left to pray. Regime officials said we made a mistake we had to have the ceremony first and then have given the food.

In Mashhad, the government ordered that all businesses, markets, and malls around the shrine of Imam Reza should be closed for half a day or a full day. The Ferdowsi’s market in Mashhad was forced to be closed until 3 pm. If the shop was open on Mofateh Street, the owner would be warned.

The Ministry of Education has instructed all teachers that students should all compose an essay on Qasem Soleimani and must light candles and cry in classrooms.

One of the people in Mashhad said: “By Saturday, January 4, the crowd had been transported to Mashhad by bus from different villages. From our village, which is 240 km away from Mashhad, they brought 150 families in buses promising them 3 meals a day and free accommodation.”

At 11 pm on Saturday, January 4, in Ahmadabad Street in Mashhad Regime was giving out photos of Qassem Soleimani and asked people to put the photo on the windshield of their car but the majority of people would throw the photos out of their windows.

Most of the personnel of Rajaii Shahr Prison were dispatched to the funeral of Qassem Soleimani on Monday, January 6.

On Monday, January 6, a school principal in Tehran telephoned each of his staff and told them, “Whoever is at the funeral of Qassem Soleimani should get himself a Selfie, he/she will have both an afterlife reward and a 200 Tomans from school.”

In Kerman, many posters and banners were circulated on the intersections and across the city, none of which were approved by the people, and all were opposed to this circus. People were happy with the death of Qassem Soleimani.

These are just a few of the hundreds of reports that citizens have reported.

The regime has tried hard to portray Qassem Soleimani as a “national hero”, Ali Khamenei’s representative in the Quds Force said that ” Qasem Soleimani did not receive a rial or a dollar for his missions.”

While everyone knows that Qassem Soleimani in Iran had a huge network from the IRGC to the municipalities, the Endowment Organization to the Red Crescent, the Ministry of Defense’s Quds Force, and even an independent financial network, he could distribute cash and distribute weapons to his forces within 24 hours. He was the number one man in regional diplomacy in the Islamic Republic. He was a drug dealer and fed the Quds terrorist force with drug money.

The regime’s elaborate and expensive ceremonies and propaganda are happening, while as soon as the families of martyrs of the uprising announced that they would hold a mourning ceremony on December 25th brought 400,000 armed forces into the streets to stop people to participate in any ceremony.

However, in various Iraqi cities, the slogan of the curse on Qasem Soleimani,” I am  Iraqi”, was heard in the streets of Baghdad and Karbala and Nasserieh.

On Sunday morning the 5th of January, Iraqi revolutionary youths, along with students in southern cities and provinces, including Nasiriyah, Basra, Diwaniyah and Karbala began a strike against the illegitimate government and mercenaries of the Iranian regime.

Khamenei’s mercenaries, who tried to glorify Qassem Suleimani and Abu Mahndes by driving around their empty casket, met with youth resistance. Hashed al-Sha’abi mercenaries fired on people in Nasserieh, killing one youth.

Al-Arabiya reports after youth were killed in Nasserieh people set fire to the Hashed al-Sha’abi office in Dhi Qar.

In addition to burning the Hashdal-Shaabi office, the youths burnt the car of the Mullahs regime’s mercenaries who had come to Habobi Square with empty caskets of Qassem Soleimani and Abu Mahdi Mohandes.