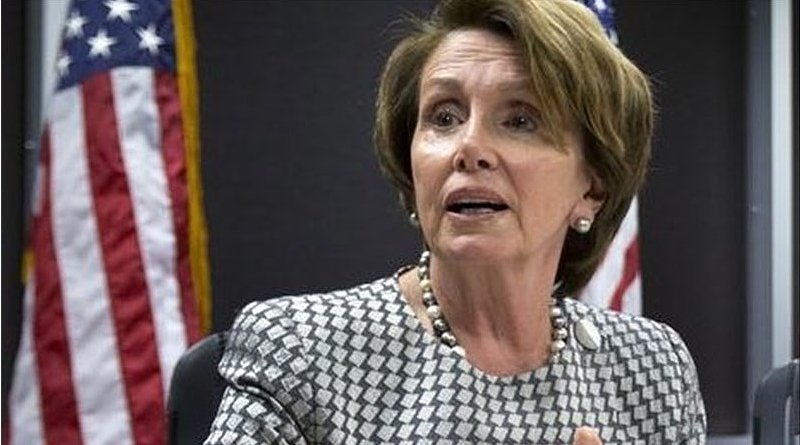 U.S. House Speaker Nancy Pelosi says the House of Representatives will offer a resolution Monday calling on President Donald Trump’s Cabinet to invoke the 25th amendment, removing him from office.

In a letter to her Democratic colleagues, Pelosi said if Vice President Mike Pence does not respond within 24 hours, the House will proceed with impeachment.

“In protecting our Constitution and our democracy, we will act with urgency, because this president represents an imminent threat to both. As the days go by, the horror of the ongoing assault on our democracy perpetrated by this President is intensified and so is the immediate need for action,” the letter read.

The push to remove Trump from office in his final days comes amid growing calls to hold him accountable for last Wednesday’s mayhem that left five people dead at the U.S. Capitol as a mob of Trump supporters stormed past police into the building.

Neither Trump nor the White House responded to Pelosi’s move on Sunday.

President-elect Joe Biden has taken a hands-off stance on the impeachment move against the outgoing president who has yet to concede the election but has acknowledged there will be a “new administration” in Washington come January 20.

“In 10 days, we move forward and rebuild — together,” Biden said Sunday on Twitter.

One of Pelosi’s top congressional lieutenants, Congressman Jim Clyburn of South Carolina, told the “Fox News Sunday” show that the House could vote on impeachment within days, even though Trump’s four-year presidency ends next week with the inauguration of Biden and Vice President-elect Kamala Harris.

Given that Trump will be out of office shortly, there is little likelihood that the Senate would hold an impeachment trial before his term ends, although it could do so after he leaves, and if it convicts him, keep him from ever holding federal office again.

But Clyburn said the urgency to impeach Trump for a second time is paramount.

“Our business is to impeach, basically an indictment,” Clyburn said. “Our vote is our voice, and our vote is a voice of disapproval.”

Democratic Congresswoman Ilhan Omar of Minnesota, a long-time Trump critic, said she would introduce two articles of impeachment against Trump on Monday for “abuse of power” for pressuring election officials in the southern state of Georgia to overturn Biden’s narrow win there and “incitement of violence for orchestrating an attempted coup against our country” with the storming of the Capitol.

At least 180 House Democrats have signed on to the impeachment effort, but that number is short of the 218 majority in the 435-member House, and no Republicans have voiced their support for it.

About two-thirds of the House Republican caucus voted last week against accepting the election results in the eastern state of Pennsylvania, one of a half dozen states Biden narrowly won to capture the presidency.

Trump and the White House have remained silent on the possible impeachment. The White House says Trump is scheduled to visit Texas on Tuesday to highlight his administration’s work on a border wall separating the U.S. from Mexico.

Republican Senator Roy Blunt, a Missouri Republican and head of the committee planning Biden’s inauguration, told CBS News’s “Face the Nation” show that Trump’s impeachment and removal from office “clearly is not going to happen between now and the last day he is in office.”

Two Republican senators, Lisa Murkowski of Alaska and Pat Toomey of Pennsylvania, have called for Trump to resign, but the president has told advisers he does not plan to do so.

“I think at this point, with just a few days left, it’s the best path forward, the best way to get this person in the rear-view mirror for us,” Toomey said Sunday on CNN, in calling for Trump to quit voluntarily. “That could happen immediately. I’m not optimistic it will.”

“I don’t think there’s any doubt, none in my mind, that the president’s behavior after the election was wildly different than his behavior before,” Toomey said. “He descended into a level of madness and engaged in activity that was just absolutely unthinkable and unforgivable.”

Meanwhile, some U.S. diplomats have condemned Trump’s incitement of the assault on the Capitol and called for use of the 25th Amendment to the U.S. Constitution to declare him as incapacitated and remove him from office.

“Failing to publicly hold the president to account would further damage our democracy and our ability to effectively accomplish our foreign policy goals abroad,” said one of the cables that was sent to State Department leadership.

The assault on the Capitol is also having financial repercussions for the president and other Republicans.

The PGA of America announced late Sunday it is terminating an agreement to hold the 2022 PGA Championship, one of golf’s four major tournaments, at Trump’s Bedminster course in New Jersey.

In a statement, PGA of America President Jim Richerson did not mention Trump or Wednesday’s events, but said holding the tournament at the Bedminister course would be “detrimental to the PGA of America brand.”

Major banks, including JPMorgan and Citigroup, have announced a pause in all political donations.

Home » Pelosi Sets Out Plans To Call For Trump’s Removal