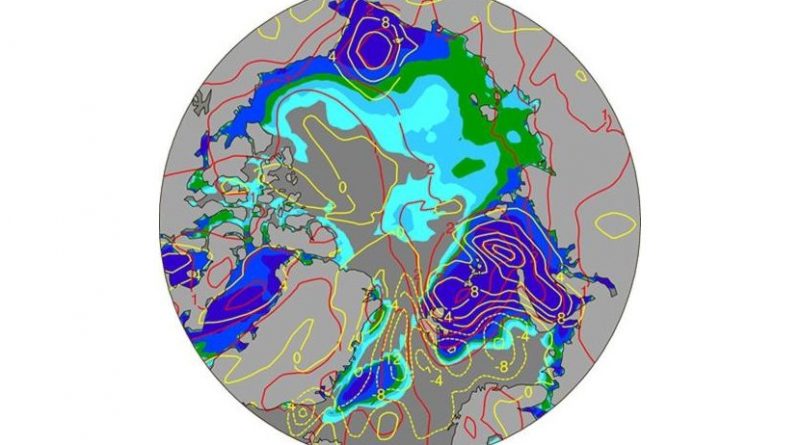 Enhanced warming in the Arctic (north of 67°N) is found in both recent observational investigations and model simulations with greenhouse gases (GHGs) emissions increasing. Global warming is occurring twice as fast in the Arctic than anywhere else on Earth. However, why the largest the Arctic amplification (AA) only occurs in certain periods over areas with significant sea-ice loss is still under great debate.

Scientists from State University of New York, Albany and Institute of Atmospheric Physics, Chinese Academy of Sciences found the answers by means of historical data analyzation and climate model simulations. Their analyses indicated that AA would not slow down until the 22nd and 23rd centuries, after almost all of the Arctic’s sea ice has melted away with GHGs emissions increasing.

“Rapid Arctic warming and sea ice loss are attracting a lot of attention in the media, public and scientific community. Our study links the two together and suggests that the sea ice loss is causing the rapid warming in the Arctic,” said the lead author, Aiguo DAI, in a news release. “When the sea ice melts away completely, this elevated warming will also disappear and the warming rate in the Arctic will be similar to the rest of the world,”

According to this research, the large AA only occurs in clod season (October to April), and only over the area of prominent sea-ice loss. This is mainly because seasonal sea-ice melting from May to September causes more extensive upper seawater and absorbs more sunlight during the warm season and the heat energy is stored in sea-surface Arctic waters. Most of this energy is released into the atmosphere through longwave radiation, and latent and sensible heat fluxes to heating the atmosphere during the cold season when Arctic Ocean becomes a heat source, leading to the large AA.

Scientists warn that the melting of Arctic sea ice will greatly enhance warming in Arctic for the coming decades and could also impact weather patterns in mid-latitudes, causing more frequent intrusions of winter polar vortex into China and the continental U.S., leading to extreme events including severe winter weather.