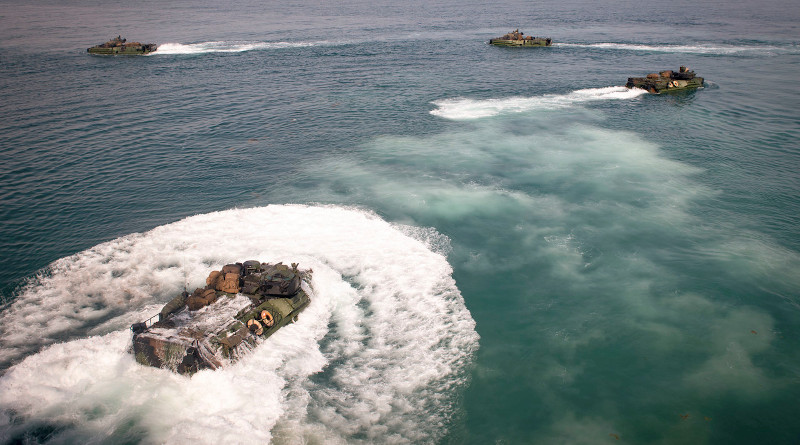 Since the National Defense Strategy was published in 2018, Defense Department officials who testify before Congress have stressed proposals based on that strategy.

Kathryn Wheelbarger, the acting assistant secretary of defense for international security affairs, Tuesday stressed that connection during her testimony before the House Armed Services Committee.

Wheelbarger said the defense strategy focuses on near-peer competition with China and Russia while remaining vigilant to threats from Iran and North Korea. The strategy also continues to address threats from violent extremist organizations.

This strategy requires the department to prioritize resources to build capabilities, force readiness and military capacity for a high-end conflict. “We must also deter and confront current adversaries while avoiding miscalculation or escalation that would distract and undermine our national security interests,” she said.

The U.S. strategy in the Middle East is to ensure the area does not become a safe haven for terrorists or dominated by any power hostile to the United States. “The department is focused on ensuring continued success against ISIS and al-Qaida, strengthening deterrence and our defenses against Iran, and competing with China and Russia,” she said. “This requires investing and sustainable partnerships as a whole-of-government effort.”

Under the strategy, both U.S. Central Command and U.S. Africa Command are economy-of-force missions. U.S. Indo-Pacific Command and U.S. European Command — confronting China and Russia — are the department’s main efforts.

“I think the department is well-positioned to address all the range of threats that we face,” Wheelbarger said. “Our approach helps us meet a variety of present and future threats while enhancing the strength and agility of our forces.”

U.S. Central Command has around 90,000 men and women operating in the 20 nations who make up the command, McKenzie said. “It’s my honor to serve with them,” the general said. “They are young Americans in the line of fire working to prevent attacks on the homeland, counter destabilizing regional influence, prevent the proliferation of weapons of mass destruction, and assure the freedom of navigation through international waterways.”

McKenzie took his time before the House committee to highlight the threats from the Iranian regime. The command’s mission is to deny the Iranian regime nuclear weapons and to neutralize Iranian malign influence in the region and globally. “Iran is persistent and is growing its arsenal of ballistic missiles despite international condemnation,” he said. “Iran remains the world’s largest state sponsor of terrorism.”

Since May 2019, Iranian proxies and Shiite militia groups in Iraq have increased attacks on U.S. interests and conducted scores of unmanned aerial system reconnaissance flights near U.S. and Iraqi security force bases. Iran has attacked vessels in the Persian Gulf and sponsored Houthi forces in Yemen. Iran attacked a Saudi oil terminal and continues to be the logistics hub for terrorists from the Mediterranean to Afghanistan.

“In early January, Iran launched more than a dozen ballistic missiles in a deliberate attack against U.S. and coalition forces at two bases in Iraq,” McKenzie said. “This state-sponsored missile strike crossed the threshold compared to previous attacks and has probably set a lower bar for future actions by the regime.”

Actions from Iran have slowed down, but that doesn’t mean Iranian leaders have changed their stripes. U.S. Central Command officials believe the regime wants to continue malign activities that threaten lives, destabilize sovereign nations, and threaten freedom of navigation, regional commerce, global energy supplies and the global economy itself, the general said.

Central Command must deter Iranian military adventures, and moving forward, the command must posture forces with the operational depth to achieve a consistent state of deterrence against Iran and be adaptable to future Iranian threats, he said.

Africa is a vast continent that requires different tactics in different areas. The continent has a number of strategic choke points and sea lines of communication that are essential to global commerce and critical to U.S. operations in the world. “Our future security and prosperity rest on our strategic access and influence in Africa in times of crisis,” Townsend said.

China and Russia are competing with the United States and its partners for influence on the continent. China and Russia are aggressively using economic, diplomatic and military means to expand their access and influence. “I believe Africa offers America a competitive edge over China and Russia, and we should take advantage of it,” the general said. “We will grow more efficient to contribute to higher defense priorities and refocus resources to global power competition.”

Still, the African Command must deter and confront terror groups like ISIS and al-Qaida, which are active on the continent. “Today, Africom does that using a very light and relatively low-cost footprint by supporting African and international partners who are leading these efforts,” he said. “In my first eight months on the job, I have learned that small investments, a few troops, and a few bucks can go a long way and make a real difference in Africa.”

The command’s whole-of-government and “partner-centric” approach acts as a force multiplier to address Africa’s many complex challenges. “What Africom accomplishes with just a few people and a few dollars on a continent three-and-a-half times the size of the continental United States is a bargain for the American taxpayer and low cost insurance for America,” he said.