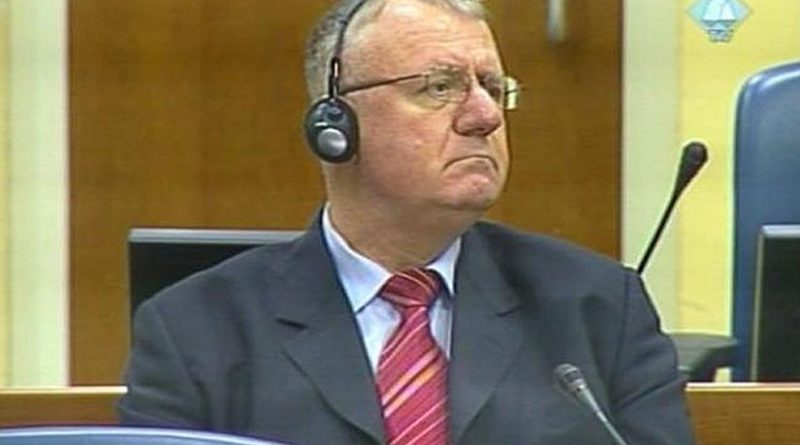 Serbian nationalist hardliner Vojislav Seselj, whose verdict is due on Wednesday, has repeatedly shown off his disdain for the UN war crimes tribunal and has been convicted of contempt of court three times.

“Mr. Seselj, will you please stand up?” a Hague judge asked the leader of the Serbian Radical Party, Vojislav Seselj, at one point during his long-running trial.

This scene from the courtroom at the International Criminal Tribunal for the former Yugoslavia in 2012 is only one of many examples of how Seselj demonstrated his disdain and contempt for the UN court during his 11-year trial.

Following his extradition from Serbia to the Tribunal in 2003 to face accusations of war crimes in Bosnia and Herzegovina, Serbia and Croatia, his strategy has been to belittle both the court and the proceedings.

He described it as “a NATO court”, called it “anti-Serb”, boycotted it with a hunger strike, cursed in the courtroom, and said he would “destroy” the Tribunal.

At the very beginning of his trial, he vowed to defend himself with “political speeches that are better than yours”.

He claimed that he had been vindicated after he was acquitted in March 2016 of persecution on political, racial and religious grounds. The verdict determined that the creation of a ‘Greater Serbia’ was his political goal, but it did not necessarily imply that he committed crimes.

The prosecution appealed and the second-instance verdict is due on Wednesday, but Seselj will not be in court to hear it – he has not returned from Serbia since he was temporarily released for cancer treatment in November 2014.

During his trial, Seselj was convicted of contempt of court three times because he disclosed the identity of protected witnesses, and sentenced to a total of four years and nine months in prison.

The first indictment for contempt of court was filed in January 2009. Seselj was accused of having interfered with the administration of justice by disclosing the names of three protected witnesses in a book he authored.

He pleaded not guilty, saying the book was not intended for the general public. During the proceedings, he said his intention was not to disclose the names of the protected witnesses or intimidate them, but to “publicly expose a conspiracy” related to certain events mentioned in the indictment.

Despite that, court determined that “the book contains extensive and detailed personal data about the witnesses in question under their full names or pseudonyms assigned to them for the purpose of the Seselj case”.

“The Trial Chamber notes with grave concern the deliberate way in which the protective measures were violated. The Chamber considers this a serious interference with the administration of justice, giving particular consideration to the potential adverse impact that such conduct may have upon witnesses’ confidence in the International Tribunal’s ability to guarantee the effectiveness of protective measures,” the verdict said.

Seselj filed an appeal against the verdict, saying the Tribunal had no jurisdiction to conduct proceedings for contempt of court and that the punishment was too harsh, but the appeals chamber upheld the original ruling.

Thirteen months after this first indictment for contempt of court, another one was filed. In February 2010, Seselj was charged with having disclosed information, in another book he authored, that could lead to identification of 11 more protected witnesses.

The court determined that “the book contains information that could lead to identification of each of the protected witnesses”, Seselj was sentenced to 18 months in prison.

He announced he would file an appeal against this verdict too, but failed to submit a written motion within the specified deadline, so the ruling was confirmed.

‘Undermining confidence’ in the Hague Tribunal

Seselj’s third and final indictment for contempt of court was filed in May 2011.

The indictment consisted of five counts, the first two referring to the fact that he failed to remove books in which he disclosed the identity of protected witnesses from his website even after the contempt of court verdicts. The remaining counts referred to new books and confidential prosecution motions to the court, which he published on his website, in which he revealed details related to protected witnesses.

Although Seselj announced that he would call witnesses and personally testify, it did not happen because the chamber rejected his request to allow his legal adviser and case manager to attend the proceedings.

Seselj was asked to present his personal view of the proceedings, but he refused to do so, claiming his “rights have been denied”. In his closing statement, he insisted that “the trial is biased”.

The chamber found him guilty and sentenced him to two years in prison, noting that he was in a position to take steps to remove the material in question from the website and that he “continuously undermined public confidence” in the work of the ICTY.

“The Chamber considered Seselj’s repeated defiance of the International Tribunal’s authority to be an aggravating factor,” the ruling said.

“The repetitious nature of his conduct is demonstrated by his continuing refusal to obey the orders requiring him to remove confidential material which he has disclosed on many occasions over the course of several years. This flagrant disregard for the Chamber’s orders amounts to a direct attack upon the judicial authority of the Tribunal,” it added.

Besides Seselj’s three contempt-of-court trials against Seselj himself, there were two others related to his defence in The Hague.

In the first case, the former chief of the his Serbian Radical Party’s wartime staff, Ljubisa Petkovic, was sentenced to four months in prison for contempt of court.

The verdict said thatPetkovic twice failed to comply with the Tribunal’s orders to appear as a prosecution witness; he said he would only appear for the defence.

Radeta and Jojic were accused in October 2012 of having influenced witnesses in Seselj’s trial by persuading them to either refute their statements or not testify at all, using threats, blackmails and bribery.

Serbia has so far refused to extradite them to The Hague, despite sustained international pressure.

After the United States urged Serbia to cooperate with the Tribunal, Seselj responded that he would be ready to negotiate the extradition of Radeta and Jojic “only after Hillary and Bill Clinton have been extradited to Serbia”.