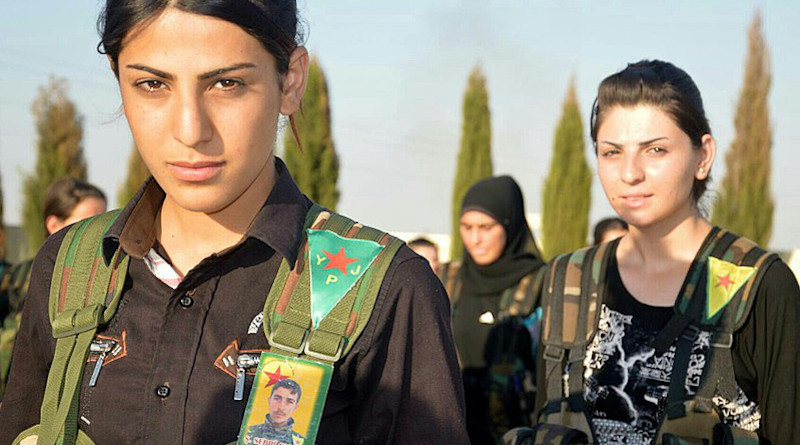 The Kurdish people – some 35 million strong – are the largest stateless nation in the world. Historically they inhabited a distinct geographical area flanked by mountain ranges, once referred to as Kurdistan.  Now it falls within the sovereign space of four separate states: Turkey, Iran, Iraq and Syria.  It is there that most Kurds live, the four communities separated from one another, but there is also a Kurdish diaspora spread across Europe, the trans-Caucasus and central Asia.

Around 12 million Kurds live within Turkey’s borders.  Another 6 million are trapped inside Iran’s extremist Shi’ite regime.  Iraq’s 6 million Kurds, up in the north of the country, have developed the near autonomous state of Kurdistan. The 2 million Kurds in Syria, forming the country’s largest minority, have also established a self-governing area, but a precarious one.  Syria’s Kurdish region, known as Rojava, occupies some 20 percent of pre-civil war Syria.  It is constantly threatened, or under actual attack, by the Turks; its leaders can no longer rely on the support of their erstwhile US allies;  and its overwhelmingly Sunni Muslim people face a hostile Shia Iran seeking to incorporate Syria into its sphere of influence.

In Syria the civil war, starting in 2011, provided the Kurds – long the victims of discrimination – with an unforeseen opportunity.  The internal situation quickly deteriorated, government forces were overwhelmed, and the Kurdish element of the opposition began seizing control of territory in the north of the country.  In mid-2012 Syrian government troops withdrew from three mainly Kurdish areas.

As Syria descended into total chaos, the militant Islamic State (ISIS) overran and captured large areas of the country.  Iran backed Syrian president Bashar al-Assad in opposing them.  The highly effective Kurdish Peshmerga forces, with the logistical support of a Western coalition led by the US, opposed both ISIS and Assad.  As the Kurds slowly pushed ISIS back, Rojava expanded.  The Kurdish region reached its apogee in October 2016, by which time the Kurds had conquered a huge area running almost the complete length of the Syrian-Turkish border.  What they had failed to do was to link their consolidated area in the north-east with the whole of Afrin province in the north-west, of which they held only part.

The strengthening Kurdish presence alarmed Turkey’s president Recep Tayyip Erdogan. He consistently maintained that the Kurdish military forces were dominated by the PKK, his political opponents at home who supported Kurdish autonomy, and had occasionally resorted to violence.  Erdogan determined to weaken the Kurdish presence along his southern border.

Accordingly he has launched three military incursions into northern Syria since 2016, and has succeeded in progressively reducing Kurdish control of the region.  In 2019 he persuaded President Trump to stand aside as he created what he termed a buffer zone out of part of Rojava, and he has threatened to flood the area with some of the 4 million Syrians who have fled the civil war and sought refuge in Turkey.

Nevertheless Erdogan’s position is difficult.  He has no legal right to be occupying Syrian soil, and the Kurds are determined to defend their hard-won autonomy.  Until recently they have depended on their alliance with the US, but Trump’s deal with Erdogan left them feeling betrayed.

“In light of the invasion by Turkey,” said Mazloum Abdi, commander-in-chief of the Kurds’ Syrian Democratic Forces recently, “and the existential threat its attack poses for our people, we may have to reconsider our alliances.”

The Kurdish leaders understand that Trump is anxious to withdraw US troops from Syria as soon as possible, but certainly do not want him to do so at the expense of their own people.  Knowing that Turkey has subjected its Kurdish minority in the past to treatment amounting to ethnic cleansing, they are determined to resist any further incursion by Erdogan into Kurdish-occupied Syria.

“We do not trust the Russians and the Syrian regime,” says Abdi, but the Kurds have responded to olive branches held out to their negotiators about a possible post-war accommodation.

The Kurdish administration in Rojava – known since 2012 as the Democratic Federation of Northern Syria (DFNS) – are not seeking independence, but a degree of autonomy.  Both they and Assad understand that, if it is granted, a huge chunk of what was originally sovereign Syria would be brought within some form of government control.  The Kurds hope it would be akin to the arrangement in Iraq where an autonomous Kurdistan operates in alliance with the government. From Assad’s point of  view, such a deal would mean that his regime, and he himself as its President, would acquire substantial additional political support − vital if ever events force a presidential election on him as part of a peace deal.  In short, both parties stand to gain from an accord.

This is why the Kurdish military leader, Abdi, has said: “The Russians and the Syrian regime have made proposals that could save the lives of millions of people who live under our protection.,,We know that we would have to make painful compromises with Moscow and Bashar al-Assad if we go down the road of working with them. But if we have to choose between compromises and the genocide of our people, we will surely choose life for our people.”

Home » A Future For The Kurds In Post-War Syria? – OpEd

2 thoughts on “A Future For The Kurds In Post-War Syria? – OpEd”