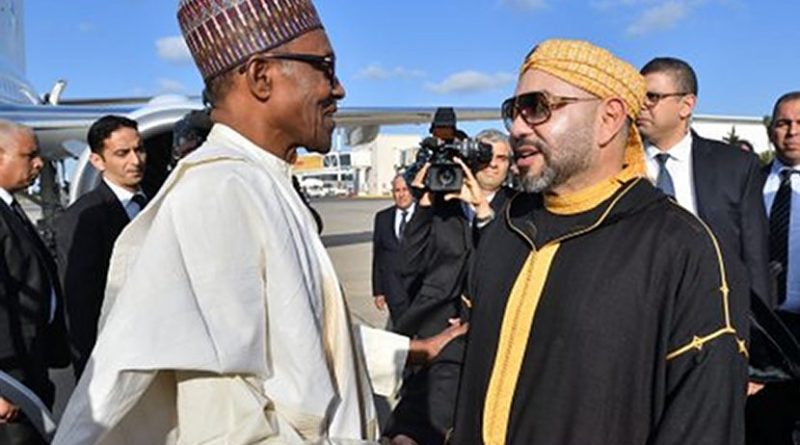 Nigeria’s President Muhammadu Buhari is on a two-day working visit to the Kingdom of Morocco.The visit is at the invitation of King Mohammed VI of Morocco. The two leaders would discuss bilateral matters during the visit, which follows the successful December 2016 official visit of King Mohammed VI to Nigeria.

Following the official welcoming ceremony in honor of the Nigerian President, King Mohammed VI and H.E. Muhammadu Buhari, presided over the signing ceremony of three cooperation agreements, including an agreement on the strategic project of the Nigeria-Morocco gas pipeline.

On this occasion, Farouk Garba Said, General Manager of the Nigerian National Petroleum Corporation (NNPC), and Amina Benkhadra, Director General of the Moroccan Office for Hydrocarbons and Mining, highlighted in an address the content of the Morocco-Nigeria joint declaration on the implementation of the next phase of the Regional Gas Pipeline strategic project connecting gas resources from Nigeria to West African countries and Morocco.

Thus, they pointed out that the Nigeria-Morocco gas pipeline project was conceived during the State visit of King Mohammed VI to Nigeria in December 2016, noting that a gas pipeline cooperation agreement was signed in Rabat on May 15, 2017, which commits both parties, NNPC and ONHYM, to jointly fund a feasibility study on the Nigeria-Morocco Pipeline Project.

“The Nigerian and Moroccan parties have worked effectively and constructively to ensure that the feasibility study for the pipeline, which is the first phase of this strategic project, is carried out by the contractor in a professional manner and in accordance with best practices,” they said, noting that “several routes have been evaluated so far. The first is an offshore route, the second is an onshore route along the coast, while the third one is a mixed route.”

The two officials said that “for economic, political, legal and security reasons, the choice was made on a combined onshore / offshore route.”

“The pipeline is approximately 5,660 km long and its CAPEX has been evaluated,” they said, noting that construction will be phased and meet the growing needs of the countries and Europe over the next 25 years.

Garba Said and Benkhadra shed light, on this occasion, on the many contributions of this strategic project, including the regional collaboration between Morocco, Nigeria, Mauritania and the ECOWAS countries in order to promote trade and development to serve the mutual interest of the countries, the integration of the economies of the sub-region in line with the NEPAD objectives, the reduction of gas flaring and the diversification of energy sources, the contribution to combating desertification by using gas as a reliable and sustainable form of energy in the sub-region and creating wealth and reducing poverty through the promotion of economic growth opportunities in the sub-region.

They added that both parties have seized the opportunity of the Summit between His Majesty the King and H.E. President Muhammadu Buhari to move on to the next step of this ambitious project, where the countries crossed by the pipeline and the ECOWAS will sign Memorandums of Understanding, in addition to the validation of the volumes available for Europe by the stakeholders in Nigeria and by the NNPC and the beginning of discussions with the Turtle gas field operators off the coast of Senegal and Mauritania, and approaching European customers who are the most important potential off-takers.

The actions planned include the estimates of investment and operating costs, the completion of the economic analysis on the basis of volumes and the finalized construction hypotheses and the beginning of discussions with international banks to test their willingness to fund this project, in addition to the preparation of preliminary documents.

Farouk Garba and Amina Benkhadra also stressed that the two Heads of State insisted on the need to take into account the ecological and environmental dimension in the various stages of the project.

Given its strategic importance and benefits, not only for Nigeria and Morocco, but also for the countries crossed by the pipeline, NNPC and ONHYM confirm their joint commitment to carry out this project, they said.

The first agreement is a joint declaration between the Kingdom of Morocco and the Federal Republic of Nigeria on the completion of the next phase of the Regional Gas Pipeline strategic project connecting gas resources from Nigeria to West African countries and Morocco, which was signed by Amina Benkhadra and Farouk Garba Said.

The second document signed is a Memorandum of Understanding between the OCP Group and the Nigeria Sovereign Investment Authority for the development of an industrial platform in Nigeria for the production of ammonia and related products. This agreement was signed by Mostapha Terrab, CEO of OCP Group, and Uche Orji, chief executive officer of the Nigeria Sovereign Investment Authority.

Morocco and Nigeria are going through one of the best moments of their relationship. The ties that link them, as well as the values and principles they share, make it stronger every day. The two countries are witnessing a historical moment characterized by both countries’ political willingness to further strengthen their ties and deepen their strategic dialogue under a renewed perspective. The current regional context demands a revitalization of the co-operation that already exists between the two countries countries.

King Mohammed VI’s last visit to Abuja confirmed the close friendship between people and governments. Over the past year, officials from both countries have undertaken main efforts to consolidate their bilateral relationship: Capitalize and continue strengthening their shared values and institutionalized co-operation mechanisms; achieve a more articulated mobility between the two countries; and increase bilateral relations.

The bilateral relationship between Morocco and Nigeria lays upon mechanisms to deepen their dialogue at the highest level. The leaders of the two countries will keep working constructively to further strengthen relations between Morocco and Nigeria, achieve mutual benefits and contribute to reaching their shared goal: to make Africa the most prosperous and competitive continent in the world.

Dialogue between the two African leaders will undoubtedly enhance collaboration between their governments to advance their shared objectives, while ensuring that their bilateral relationship continues to be at its best, with a broader agenda than ever. This vital junction for Morocco-Nigeria relations will translate into more and better opportunities for the two countries.

This partnership between the two nations will take the bilateral ties to a new high and will sound the clarion call to form an all-directional, multi-layered and wide-ranging cooperation. This pragmatic cooperation in various fields between the two countries will feature fruitful achievements and exemplary highlights.

Morocco will continue to be present in Africa and reinforce south-south cooperation to contribute to the development of the continent. It is worth reminding King Mohammed’s vision for Africa that was well summarized in a statement he made at the Moroccan-Ivorian Economic Forum, held in Abidjan on February 24 2014, when he laid out a compelling vision for Africa’s development – He said that “This objective [prosperity for future generations] will even be more readily attainable when Africa overcomes its Afro-pessimism and unlocks its intellectual and material potential as well as that of all African peoples. Just imagine what our continent will look like, once it frees itself of its constraints and burdens!” Certainly, the current Nigerian President visit to Morocco will grant bright prospects of Morocco-Nigeria bilateral relations.