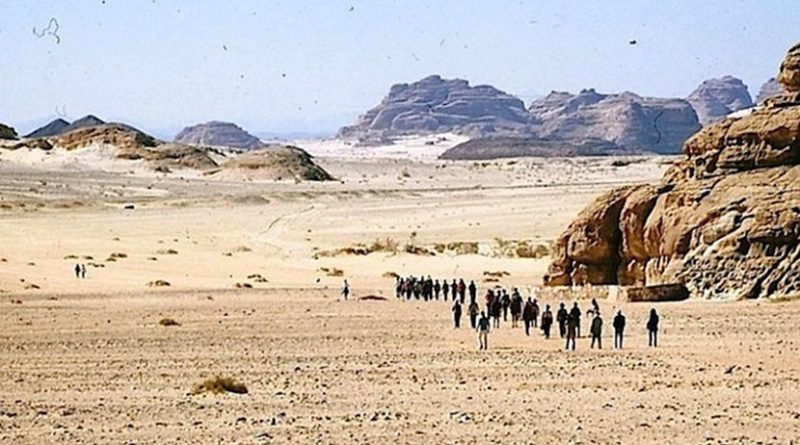 Eritreans fleeing the country first have to risk their lives crossing the border, whose guards are authorised to shoot on sight. Those who try to reach Israel must cross the Sinai Peninsula. Many don’t make it. Credit: Gan-Shmuel archive

For the first time ever, the UN Security Council has put human traffickers on an international sanctions list by imposing sanctions on six leaders operating networks in Libya. Four are Libyans, including the head of a regional coast guard unit, and two Eritrean nationals.

The unprecedented sanctions follow widespread outrage at the end of 2017 after CNN aired footage showing the auctioning of migrant men as slaves in Libya.

“The targeted sanctions are perhaps the first step towards ending impunity of human trafficking,” said Professor Mirjam van Reisen. She and Munyaradzi Mawere have edited Human Trafficking and Trauma in the Digital Era: The Ongoing Tragedy of the Trade in Refugees from Eritrea.

“In a next step the UN Security Council must recognise the exterritorial criminal engagement of the Eritrean Regime. The UN SC should also take its responsibility to consider the Report of the UN Special Inquiry on Eritrea which concluded that within the country, crimes against humanity are committed and are ongoing,” she told IDN.

The sanctions involving a global travel ban and an assets freeze are the result of an internationally backed proposal by the Netherlands, a non-permanent member of the Security Council. It has contributed significantly to exposing the illicit Eritrean involvement abroad.

Earlier this year, Dutch Foreign Minister Halbe Zijlstra expelled Eritrea’s top diplomat in the country after warning him to put an end to the African country’s practice of enforcing a so-called “diaspora tax” on Eritreans.

Tekeste Ghebremedhin Zemuy, Eritrea’s charge d’affaires in the Netherlands, “has been declared persona non grata,” Zijlstra said in a letter to the president of the Dutch parliament.

The Dutch proposal to the Security Council to impose international sanctions was reportedly presented on May 1, 2018 but was held up by Russia, which sought to examine the evidence against the six men.

The proposal drew to no insignificant extent on the book by Professor Van Reisen and Mawere, which contains the names of several human traffickers involved in criminal networking.

Van Reisen and Mawere stress: “Crimes against Humanity are ongoing in Eritrea. Human trafficking is organised from within Eritrea and the lines between human trafficking and smuggling are blurred. Refugees believe that traffickers from within Eritrea are connected to the broader network operating outside Eritrea, which involves perpetrators all along the routes. Many who flee stay within the region, but feel that they are in constant danger.”

According to Van Reisen and Mawere, the human trafficking network leading to Tripoli and the Central Mediterranean route began in 2009, when many Eritreans were abducted and held in captivity in Sinai. There they were tortured and had ransoms extorted from them by calls to relatives and friends over mobile phone.

Some have been persecuted, such as the Eritrean trafficker Medhanie Yehdego Mered, known among refugees as ‘The General’. But in a tragic mistake the wrong person was taken to court.

According to The Guardian and a Swedish documentary, the real Medhanie was recently confirmed to be operating with a Ugandan passport from Kampala. Another Eritrean trafficker said to have a central role is Angosom Teame Akolom, also known as Angosom Wajehey or Angosom Kidane.

Angosom is alleged to be a key player in human trafficking from Eritrea among others to Egypt and Sinai. He is reported to have been a member or the head of the Eritrean Intelligence Agency in Asmara.

Van Reisen and one of the researchers, Meron Estefanos, concluded that the trafficking networks operated with knowledge of the Eritrean regime. In the book, Van Reisen and Estefanos wrote: “Linked across the region between Eritrea, Ethiopia, Sudan, Egypt and Libya, the Eritrean refugees are traded as priced commodities: the most conservative estimate of the total value of the human trafficking in trade in Eritreans is over 1 billion USD.”

According to the researchers, the financial gains are controlled through an international web of informal financial agents operating in Asmara, Khartoum, Israel, and Libya.

An Eritrean who made the journey told the researchers:

“In Khartoum, I went to an Eritrean called Zeki. I paid 1,600 USD from Khartoum to Libya. I went to Asmara Market in Khartoum. I paid to an Eritrean man, Welid, USD 2,200 USD for the crossing on the boat. They split it, they pay the Sudan people and Libya people and they keep the rest.” (Interview by Van Reisen).

Van Reisen and Estefanos spoke to an Eritrean, named as Abderaza or Abdurazak, who has been in charge of developing the route from Eritrea to Libya since 2005 or 2006:

“The alleged head of the human trafficking organisation in Libya (…) is now a wealthy man. (…) According to various sources, this Eritrean started his involvement in smuggling and human trafficking in Libya in 2005. He has residences in Libya and Dubai. Other Eritreans, working for him (…) were involved in the day-to-day organisation and collection of the payments.”

The trafficker was also identified in a report by the Intergovernmental Authority on Development (IGAD), an eight-country trade bloc in Africa, which includes governments from the Horn of Africa, Nile Valley and the African Great Lakes. Its headquarters are in Djibouti City.

The Eritrean ‘top traffickers’ work with Libyans to arrange transport and accommodation. The book identifies the role of the Eritrean embassy in Libya:

“A refugee mentioned that he saw that a representative of the Eritrean Embassy in Tripoli assisted specific refugees who had been captured by the Libyan authorities while moving across Libya to Europe (…).”

A similar allegation was made in the IGAD report, which stated:

“Nevertheless, one NGO official based in the region for a significant amount of time alleges that some remaining diplomatic personnel profit from the irregular migration routes, by charging ‘fees’ to negotiate the release of people from detention centres. Two eyewitnesses appeared to corroborate these allegations when they reported that they have seen high-profile smugglers at the Eritrean embassy in Tripoli.” (cited in Van Reisen and Mawere, p. 176)

Note: This article draws on Martin Plaut’s report in the Eritrea Hub.