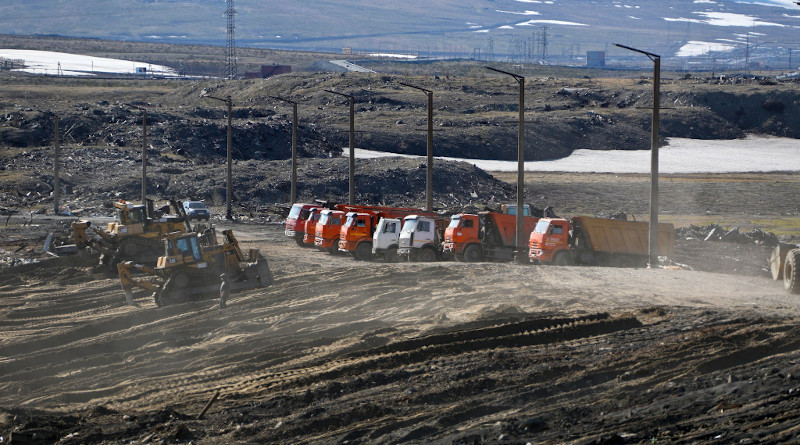 (RFE/RL) — Just a few days after thousands of tons of diesel fuel leaked from a storage tank and turned the waters of an Arctic river a sickly purply-red, the mining giant that owned the tanks offered a tentative explanation of what happened.

“Particular attention is being paid to analyzing the risk of soil subsidence, in permafrost, under especially dangerous structures,” said Norilsk Nickel, a massive Russian mining company.

“It’s possible that it was a loss of integrity due to thawing of the undersurface,” Sergei Dyachenko told state-run Rossia-24 TV on June 4.

The spill – estimated at nearly 20,000 tons, or 146,000 barrels – is one of the largest in Russia ever, according to environmental groups. And the fact that thawing permafrost appears to have caused the tank to crack may be a harbinger of what may occur with increasing frequency for Russia’s aging industrial Arctic infrastructure.

Climate change has substantial upsides for Russia, where nearly two-thirds of the country is estimated to be permafrost – ground that until recently has never fully thawed even during the hot Arctic summers.

Retreating ice shelves mean the country’s 24,000 kilometers of Arctic shoreline is more accessible to commerce. Ship traffic can travel from East Asia to Europe in shorter amounts of time. More land will also become arable for farmers and agri-businesses to cultivate, and push Russia toward greater food production and exports.

The flipside of a thawing Arctic is substantial — and for the environment, potentially dire. Thawing permafrost can lead to ground shifting or sinking. That endangers everything from oil-storage tanks to aging pipelines to factories and residential buildings engineered for stable, mostly frozen land that is no longer that.

“In times of global climate change, this problem is characteristic of the Arctic region,” Greenpeace Russia said in a statement days after the scope of the Norilsk spill became clear.

“Permafrost has been changing for many years, not just in Russia [but also] in Canada [and] the Scandinavian countries. Few have been paying attention. And few are discussing it openly,” Aleksandr Fedorov, deputy director of the Melnikov Permafrost Institute in the Siberian city of Yakutsk, told RFE/RL.

It’s difficult to say exactly what happened with the diesel fuel spill, he said.

But when it comes to industrial infrastructure such as “gas pipelines, oil pipelines, factories, and workshops,” he said, “there are many of these things that’ve been built in these sorts of risky ecological zones.”

The Kremlin’s reaction has underscored the magnitude of the incident, which occurred just outside of Norilsk, a heavily polluted industrial city of 180,000 people located around 2,900 kilometers northeast of Moscow.

Hundreds of engineers and emergency personnel have been flown to the region to try and remove the leaking fuel and clean up the surrounding environment. Oil-containment booms were set up on the Ambarnaya River to try and keep the spill from flowing into a downstream lake and then into Kara Sea.

But on June 9, the spill had already reached the lake, about 20 kilometers downstream from Norilsk, the regional governor told state TV. The head of Russia’s environmental regulator estimated damages could run into the hundreds of billions of rubles. Multiple criminal investigations are under way, and the four employees of the unit that oversaw the fuel-storage tanks have been detained.

Further evidence of the Kremlin’s unhappiness came on June 7 when President Vladimir Putin was shown publicly upbraiding company officials in a teleconference.

“Why did government agencies only find out about this two days after the fact? Are we only going to learn about emergency situations from social media?” he asked.

Putin criticized Vladimir Potanin, the president of Norilsk Nickel’s holding company, for not replacing the fuel tank earlier. Potanin is one of Russia’s richest men, with much of his fortune deriving from the large and highly profitable Norilsk Nickel.

“If you had changed it on time, there would not have been this ecological damage and the company would not have had to pay for these [cleanup] costs,” Putin told Potanin, who pledged hundreds of millions of rubles to clean up the mess.

During the Soviet era, central planners invested vast sums to build up the country’s Siberian and Arctic infrastructure, building entire cities and towns to support crucial economic activity, like mining or oil and gas exploration.

The Soviet collapse resulted in the slow death of dozens of such mono-towns as the government ended subsidies and residents looked for jobs in more established locations.

But much of the industrial infrastructure remained in place: roads, railroad tracks, telecommunications and electricity lines, and a pipeline network that is second only to the United States in its length.

It’s a problem for cities as well, where Soviet builders put scores of buildings on pilings that were driven deep into the permafrost — as a way to keep the heat from the building from melting the ground and to help refreeze the ground during the frigid winters.

For example, in Yakutsk, a city of some 310,000 people, more than 1,000 buildings are considered at risk as thawing permafrost weakens the foundations, or the concrete pylons, driven deep into the ground, on which the buildings sit.

Thawing permafrost is a particular concern in the Norilsk area, which has been warming faster than some other parts of Russia’s Arctic. The region experienced a wave of above-average heat waves in May, according to government data.

“The damage and the risks” posed by permafrost thaw “will definitely increase. This is what we expect,” said Guido Grosse, a scientist at the Alfred Wegener Institute for Polar and Marine Research in Bremerhaven, Germany.

He also said it wasn’t yet clear whether the Russian spill could be blamed solely on permafrost thaw, or whether it was a broader question of maintenance and upkeep of the facilities.

“This doesn’t happen suddenly, it takes some time — months or years we’re talking about,” he told RFE/RL. “If you’re careful about your infrastructure, and you maintain it and inspect it, proper monitoring is important.”

Soviet scientists were pioneers in Arctic engineering, but a lot of accumulated research and experience has been lost over time, Grosse said.

“Some of the knowledge has been lost in 20 and 30 years since perestroika,” he said, referring to the half-decade or so before the Soviet Union collapsed in 1991. “The infrastructure has started to crumble, maintenance couldn’t be kept up with.”

Fedorov, of the Melnikov institute, said accidents of this sort frequently occur as a result of negligence or corner-cutting by construction planners seeking to keep costs down.

“Putin has long been aware of these problems, but for local leaders and factory owners, it’s all about money – it takes big money” to upgrade pipes and factories and similar infrastructure, he said.

“And so, many people don’t want to spend the money,” Fedorov said.