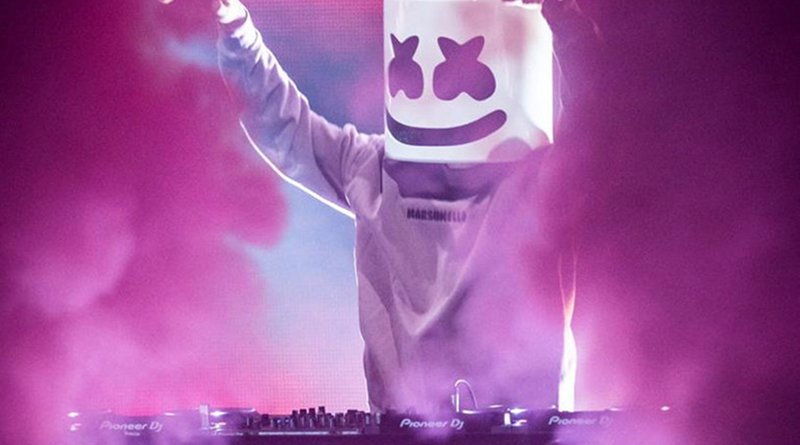 The evening began with a well-received opening set from acclaimed Saudi DJ duo Dish Dash, who are no strangers to performing in front of large crowds in the Kingdom.

After they finished up, the stage was set for the main attraction, and the eager fans who had filled the Prince Abdullah Al-Faisal Basketball Arena at King Abdullah Sport City began to chant his name. The chant turned to cheers when the opening bars of his song “Wolves,” featuring Selena Gomez, filled the venue, and when Marshmello appeared on stage the crowd erupted and many abandoned their seats.

Along with his undoubted musical talents, the mystery surrounding Marshmello’s peculiar stage persona has helped to fuel his rise to fame as a producer and DJ. His identity is hidden by a light-up, marshmallow-shaped helmet that completely covers his head, and he speaks as little as possible, happy to let his music do the talking.

Many people in the crowd were wearing replicas of his mask and others took selfies with them. Some fans danced along to the star’s music, at times attracting almost as much attention as their hero on stage.

One fan who attended the gig wearing a replica Marshmello outfit — and who, like the star, would not reveal their real identity — said: “I always cosplay as Marshmello at all the comic cons and everything, so him coming here was such good news I couldn’t believe it at first.”

Marshmello played all his best-known hits and remixes, including “Happier,” featuring Bastille, and “Silence” featuring Khalid. During the latter, he encouraged the audience to sing alternate lines, and throughout the show he kept the crowd engaged and energized by asking them to sing along and keep their hands up in the air.

His performance was filled with enthusiasm and energy, but when it finally came to the end it seemed very abrupt — he simply snapped a photo of his fans and left the stage. The audience cheered and clapped in the hope that he would return for an encore, but it was in vain.

As the crowd filed out of the venue, some of the Marshmello cosplayers danced outside to provide further entertainment for fans still buzzing with excitement.

“Seeing Marshmello in real life was so much better” than simply listening to his music, said Basma Mohammad, 30, as he left. “I just couldn’t sit down throughout the whole concert.”