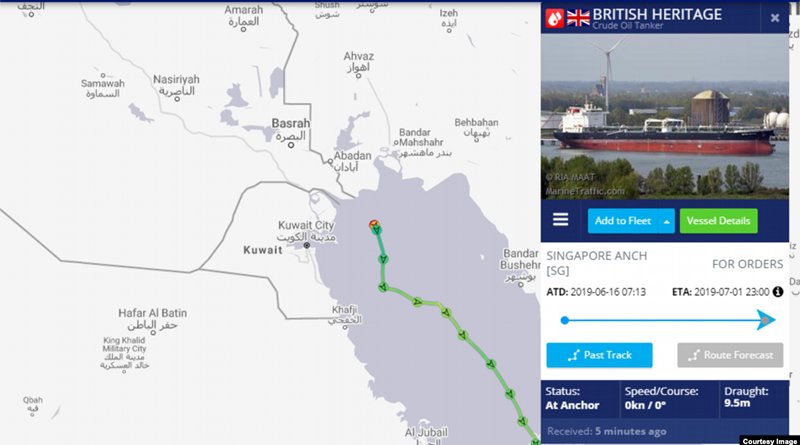 The course of the British Heritage tanker from July 5 to July 8, tracked by Marine Traffic. Source: RFE/RL

(RFE/RL) — U.S. media are reporting that five armed Iranian boats attempted to seize a British tanker in the strategic Strait of Hormuz but were driven off by a Royal Navy vessel, in a move that followed threats by Iran to capture a British ship.

But the incident ended when Britain’s HMS Montrose, which was acting as an escort for the tanker, pointed its guns on the Iranian boats as a warning, forcing them to back off, CNN said.

“The Royal Navy HMS Montrose, which was also there, pointed its guns at the boats and warned them over radio, at which point they dispersed,” one U.S. official said.

“It was harassment and an attempt to interfere with the passage,” the other official said.

No official confirmation of the incident has been given by either side.

The action came just a few hours after Iranian President Hassan Rohani warned that Britain would face “consequences” over the seizure of an Iranian supertanker last week.

Rohani was quoted by the official IRNA news agency as calling the seizure “mean and wrong” during a Cabinet meeting.

British Royal Marines boarded the supertanker, Grace 1, off the coast of Gibraltar on July 4 and seized it over suspicions it was breaking sanctions by taking oil to Syria.

Iran has demanded the immediate release of the oil tanker, while an Islamic Revolutionary Guards Corp (IRGC) commander threatened on July 5 to seize a British ship in retaliation.

“I point out to the British that you initiated insecurity [in the region] and you shall grasp the consequences of it later on,” Rouhani said in comments to the cabinet that were broadcast by state TV.

U.S. President Donald Trump on July 10 threatened to ratchet up sanctions on Iran and again denounced the 2015 nuclear deal Iran signed with world powers as the UN nuclear watchdog held an emergency meeting on Tehran’s breach of the deal.

“Sanctions will soon be increased, substantially!” Trump said on Twitter.

Trump last year pulled the United States out of the deal, which offered Tehran sanctions relief in exchange for significant curbs on its sensitive nuclear activities.

Iran had been complying with the deal, but over the weekend it increased its uranium enrichment beyond limits set in the accord in an attempt to pressure European countries to find a way around U.S. sanctions.