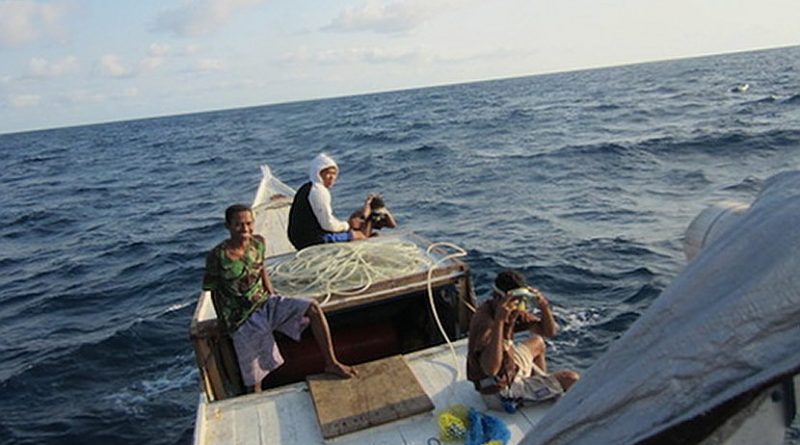 Indonesian fishermen are set to file a lawsuit against a Thai company and Australian maritime authorities over an oil spill in the Timor Sea.

The fishermen are from East Nusa Tenggara, which includes West Timor, the nation’s only Catholic-majority province.

The Australian-based company is a subsidiary of PTT, the Thai state-owned oil and gas company.

After the accident there was a largely uncontrolled discharge of oil and gas for 74 days.

It was estimated that some 2,000 barrels of oil were discharged each day into the sea before the well was capped.

Australian authorities were reported to have sprayed dispersants following the accident.

According to fisherman Farren Mustafa, a sample of seawater analyzed by a university in East Java showed poisonous substances were present.

There are claims that fish catches decreased by 80 percent.

It is being alleged that before the accident, fishermen could earn 20 million rupiah (about US$1,538) a week fishing, but now it was said to be less than five million rupiah.

“These are the reasons why we will file a lawsuit to the province’s high court within this month against the company and the Australian Maritime Safety Authority for spraying dispersants,” Mustafa told ucanews.com on Sept. 6.

“The lawsuit drafted by an advocacy team will be based on a 2009 law on environmental protection and management.”

Article 105 of the law stipulates that a person who disposes of waste into the sea can be sentenced to between four and 12 years in prison and fined.

According to the Coordinating Maritime Affairs Ministry, as well as devastating fishermen’s livelihoods, the oil spill also damaged 1,232 hectares of mangroves, 1,429 hectares of sea grass and 744 hectares of coral reefs.

Ferdi Tanoni, an adviser for the advocacy team of the West Timor Care Foundation, regarded the lawsuit as “another option” to deal with the issue.

He added that the oil spill had affected about 30,000 fishermen.

Various “legal steps” taken by both local people and the national government are ongoing.

In May this year, the central government filed a lawsuit in the Central Jakarta District Court seeking compensation.

“They also want to show their spirit of nationalism, because the issue is related to our sovereignty,” he said.

Meanwhile, Umbu Wallang Peranggi, from the province chapter of the Indonesian Forum for the Environment, said the oil spill had affected around ten districts.

In a statement PTTEP Australasia said it “maintains its position, based on extensive, independent, scientific research overseen by the Australian government, that no oil from Montara reached the shores of Indonesia and that no long-term damage was done to the environment in the Timor Sea.”