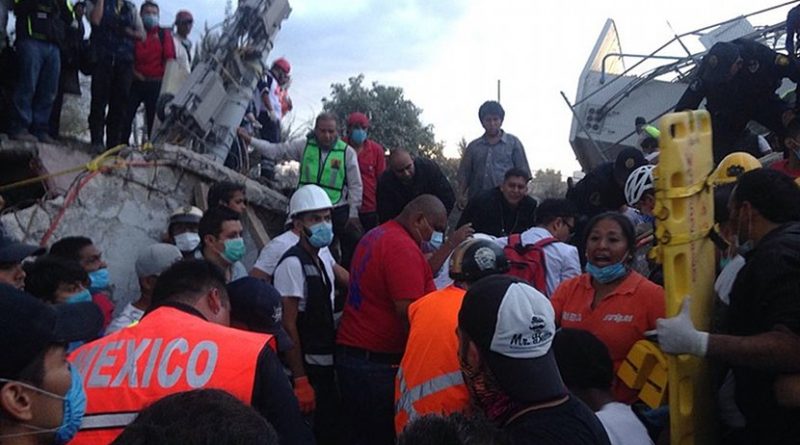 As luck would have it, I was flying towards Mexico City on 19.9.2017 when the earthquake struck. As the Benito Juárez Airport was temporarily shut down, our airplane was diverted to Houston, Texas till it got clearance to land in Mexico City. By that time, about 7 hours had past post the occurrence of the earthquake. My colleague and I had some difficulty finding a hotel as the one we had a booking in had been evacuated. My first night there was disturbed by evacuation drills which the authorities had ordered and there was no air-conditioning. I could hear sirens throughout the night. However, even so, I was amazed at the calm I saw around me. The electricity was up as were the telephone lines and internet.

The next morning, we visited the venue of the conference we had traveled to attend and as expected under the circumstances, we found that it had been cancelled. The Government had declared a national emergency. A tour of the city revealed that while there were relatively few cars and pedestrians to be seen, the city was quietly gearing up for rescue / relief work. I saw many volunteers walking, moving in cars and aggregated in and around the Zocalo or Main Square, where water and other rations were being organised. Even as the television relayed videos of the desperate ongoing efforts to rescue people trapped under collapsed buildings, in general, for a capital that had just been struck by a major earthquake I found that people were calm and there was no sense of panic or chaos, at least in the areas I had visited.

Reportedly,  as per preliminary estimates the cost of the damages may be around USD 2 billion. Its going to be a long haul for Mexico as far as reconstruction and recovery go, but it is well prepared. The government has already started making electronic transfers to the victims. I had in fact studied Mexico’s Disaster Funding as a part of my work at the National Disaster Management Authority of India.   India has statutory funds created for disaster relief and immediate rehabilitation (The National and State Disaster Response Funds (NDRF & SDRFs)), and has a statutory provision for a National Disaster Mitigation Fund (that has not been created), but unlike Mexico, India lacks a dedicated funding mechanism for post disaster asset reconstruction. Thus, in India, reconstruction would invariably come at the expense of forgoing other committed expenditure, including that earmarked for developmental activities. Further, the Indian Government does not tap into risk transfer through insurance of public assets or through reinsurance mechanisms. India is vulnerable to both water and climate related disasters as well as geologically related disasters. As indicated in the below mentioned Discussion Paper, a Lloyds study (2004-11) finds that 85% of disaster related losses are uninsured in India. The overall low penetration on non-life insurance generally implies dependence on government funding /subsidies in the aftermath of disasters and eventually, this translates into a burden on tax payers.

In contrast, Mexico has a comprehensive ex ante mechanism for funding post disaster relief and reconstruction by way of the FONDEN, apart from a funding mechanism for mitigation through FORPDEN.

FONDEN’s operation relies on a clear framework for damage and loss assessments, resource allocation, funding channels and implementation timelines between federal and state government agencies after a disaster. This allows the Government of Mexico to manage emergency response and reconstruction funds with efficiency and transparency, while generating trust and discipline…..[b]y Law, FONDEN and its related funds (FOPREDEN and CADENA, a vehicle for agricultural insurance) must receive no less than 0.4 percent of the annual budget (around US$800 million in 2011), including any uncommitted funds in the Trust from the previous fiscal year.

As funding requirements can vary, apart from risk retention by way of above mentioned budgetary allocations, FONDEN is also allowed to pay risk premiums towards insurance as a means of risk transfer. The Mexican Government has also issued multi-catastrophe bonds and has an indemnity-based insurance for FONDEN losses. All government infrastructure is compulsorily insured.(source GFDRR)

In India, the post disaster relief expenditure of states is often more than funding available through SDRF and NDRF. Further as stated above, the Government meets reconstruction expenditure from the general budget. In the event of a major disaster this would be supplemented by aid or external borrowing. As suggested in a Discussion Paper on Disaster Relief and Risk Transfer  that I had co-authored while at NDMA, we could allow the states to use a portion of the SDRF to buy insurance  towards relief and rehabilitation (over and above that available through the SDRF scheme) and towards reconstruction of damaged infrastructure. Further, the National Government could buy parametric insurance to safeguard against rarer, high impact disasters by using a dedicated portion of NDRF funds for insurance premium. (For further information, please read my article on the subject Reference: Gulati, Archana G., Financing Disaster Risk Reduction – The Indian Context (November 1, 2013). Presentation to the Expert Group Meeting on Effective Strategies for Mainstreaming Disaster Risk Reduction in Asia and the Pacific, Bangkok, 26-28 November 2013. )

This paper had also suggested other funding mechanisms such as compulsory disaster insurance for private homes, government property and revenue generating public utilities and extension of the scope of the existing public liability insurance to include public places such as hotels, cinema halls and other places where people congregate at events. Incentives by way of tax deduction for premiums could be provided. As the quantum of premiums would be linked to risk, compulsory insurance would also provide an incentive for disaster risk reduction or mitigation activities. This would also ensure that relief / reconstruction costs do not get passed on to the government in their entirety and that development related funds are not diverted for reconstruction activities.

Coming back to telecommunications, apart from the fact that in today’s world, telecoms  are the lifeblood of economic and social activity, the government is also investing huge amounts in creation of public assets by way of Digital India and the National Optic Fibre Network. However, as per usual practice these assets are not insured. The Department of Telecommunication’s Crisis Management SOP 2017 and other disaster related documentation too are silent on funding for rehabilitation and reconstruction. Needless to say, disaster resilience of telecoms infrastructure is absolutely critical as disaster alerts, rescue efforts electronic funds transfers etc. all rely proximately on the unhindered continuation of telecoms connectivity. However, given the important role of telecoms and especially broadband in economic activity, we also need to evolve a comprehensive strategy for ex ante funding of damaged assets to avoid the adverse consequences of slow and expensive economic recovery, post disasters. This should invariably include a combination of risk retention (budgetary allotments) and risk transfer through insurance.

A presentation on the above can be viewed here.

*Archana Gulati, is an ICTs Finance & Policy Specialist. This article was published at A Connected World.