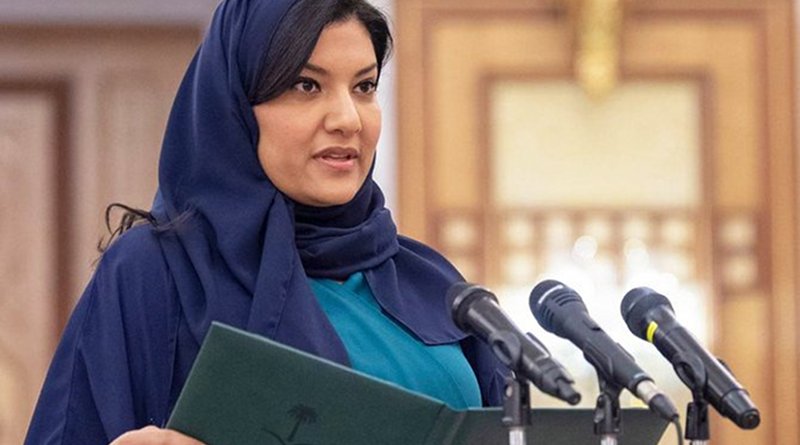 On Sept. 14, 1988, Palestine Liberation Organization Chairman Yasser Arafat stood at a public microphone and, speaking in Hebrew, wishedthe Jewish people a “Shana Tovah” (Good Year) on the occasion of Rosh Hashanah. It was rejected, ridiculed and scoffed at by anti-Palestinian critics, even though it was a significant gesture and one of several steps that ultimately led to the historic 1993 signing of the Oslo Accords, which briefly shattered 40 years of bloody conflict between Israel and Palestine.

More than 30 years later, Saudi Arabia’s US Ambassador Princess Reema bint Bandar bin Sultan last week reinforced the Arab world’s respect for all religions, separating the views of individual religions from incidents of war and conflict. Princess Reema released a card decorated with pictures of honey, apples and pomegranates — symbols of Jewish new year celebrations — with the message: “On this occasion of Rosh Hashanah, Her Highness The Ambassador Reema Bandar Al-Saud sends her wishes for a happy and sweet new year… Shana Tovah.”

It arrived at the beginning of what is — for most Jews around the world, including those in the Arab world — a 10-day period of religious observation, which culminated with Yom Kippur on Wednesday. Yom Kippur is the holiest day of the year in Judaism and its central themes are atonement and repentance. Jews traditionally observe this holy day with a 25-hour period of fasting and intensive prayer, often spending most of the day in synagogue services.

Princess Reema’s card was a kind gesture that reinforced what Saudi Arabia and many Arabs have been saying for years: That differences in politics and global concerns have nothing to do with the Jewish religion. But, as you can imagine, we are talking about the Middle East here and the kind gesture was immediately given “political” meaning by critics on all sides of the Arab-Israeli conflict.

The Jewish and Israeli news media welcomed Saudi Arabia’s gesture, but it was harshly criticized by activists on Twitter, who were angered by its symbolism of “normalization.” It also hinted at an embrace of compromise over the Israel-Palestine conflict, which extremist activists on both sides reject.

Most of the Arab and Muslim worlds ignored the gesture, not wanting to allow for a political spin, while the mainstream news media in the West and the Christian world also largely ignored it, as they often do with anything of importance to Arabs, Muslims and Palestinians.

But Princess Reema’s gracious gesture demonstrated once again that Muslims and Arabs do not dislike, discriminate against or oppose Jews or their religion. Every Arab country should be offering Jews around the world both a happy new year and a blessed Yom Kippur, or “Day of Atonement,” when Jews are commanded by their religion to consider their conduct and make amends for any misdeeds.

When some from the Arab world engage in violence against non-Muslim Western targets, the criminals are wrapped in religion and denounced as “Muslim terrorists” or for promoting “radical Islam.” And when Arabs criticize the Israeli government’s policies of brutality, land confiscation and population relocation, they are often labeled as attacking “Jews,” rather than government policies, with critics denouncing them as “anti-Semitic.”

Rather than reacting to the criticism, simply brushing it aside and calling the critics “anti-Semitic” has worked for Israel’s government under besieged Prime Minister Benjamin Netanyahu. And the Western news media often uses such false attacks to undermine Arab, Muslim and Palestinian rights.

It is by separating religion from conflict that the champions of justice for Palestinians can find a stronger foundation on which to advocate their rights.

I experience this every day being a Palestinian Christian whose wife and son are both Jewish. The fact that I am Palestinian and my wife is Jewish is a constant reminder for me that, despite the ups and downs or uncertainties of the Arab-Israeli conflict, it is still possible to maintain a home life that is respectful, understanding and, at least for me, hopeful that peace is possible.

The holiday greeting from Princess Reema is the perfect start to what can hopefully become a change for good for Muslims, Christians and Jews. But let’s not play politics with the Saudi ambassador’s genuine expression of respect for the Jewish people and their religion. In no way does it undermine the Palestinian struggle. If anything, it reinforces the sacredness of that struggle and defines it in the proper way.

I hope we see more gestures of respect for other people’s religions, not just from the Arab and Muslim worlds, but from the Jewish world too.

Home » Separating Politics From Religion Can Help Palestinian Cause – OpEd