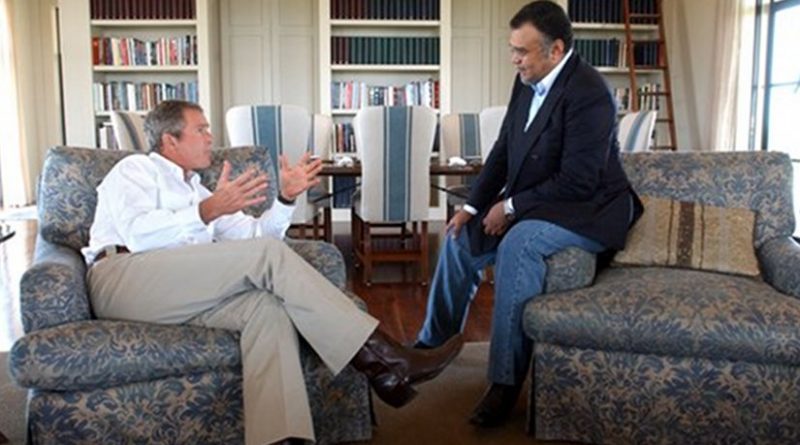 Prince Bandar bin Sultan, a former Saudi ambassador to Washington and former secretary-general of the Saudi National Security Council, clarified the history of the Palestinian cause during his interview with the Al-Arabiya TV news channel last week. He set the record straight and showed clearly that while the Palestinian cause is just, its leaders are failures.

His political analysis and historical account of the Palestinian position was aimed first at Saudi citizens, in order that they understand their country’s political positions taken and sacrifices made for the sake of the Palestinian cause over many decades. It also aimed to correct the course of the Palestinian leadership, which recently has been indecisive. As a result, they have lost many friends and allies, with only some wicked and opportunist parties remaining. The interview aimed to give advice to our Palestinian brothers, who have drawn their swords against their Arab brothers.

Prince Bandar pointed to a number of accumulated errors made by the Palestinian leadership throughout their history that did not benefit their cause. Saudi Arabia presented many initiatives in an effort to convince US administrations under Presidents Jimmy Carter and Ronald Reagan to recognize the Palestinian Authority and deal with it diplomatically. Those efforts were made despite resistance from US officials, and Yasser Arafat’s evasiveness in agreeing to the initiatives.

President Carter was, however, ready to recognize the Palestine Liberation Organization in 1977, open an office for it and set up meetings between US and Palestinian diplomats. This would have been in exchange for the organization accepting UN Resolutions 242 and 338, and agreeing that all the states in the region have the right to live in peace and security. Prince Bandar said that when King Fahd met Arafat in Taif and presented the initiative to him, the PLO leader danced and chanted “Palestine has been liberated.” The king, however, told him: “We are still at the beginning.”

Arafat told King Fahd that he would go to Kuwait and meet the Palestinian leaders there and return the next day. “He went to Kuwait and we waited for him to come back, but we did not receive any word,” said Prince Bandar. “The US ambassador called daily, saying ‘Washington is waiting.’ None of Carter’s consultants agreed but the president insisted after giving his word.”

Ten days later, Arafat sent a letter to King Fahd in which he offered his thanks and appreciation. He also attached an official letter to be passed on to Carter. It contained 10 conditions for the US to meet in exchange for Palestinian approval. “Some officials suggested that King Fahd deliver the letter to the Americans,” Prince Bandar said. However, the king refused to do so because he was concerned that if he did, the contents would be leaked to Congress and the media, turning everyone in America against Palestine and making matters much worse. The king decided to hold on to the letter and send his own message to Carter, in which he wrote: “The Saudi government considered the offer, thought about it and was not convinced, and consequently did not deliver it to the Palestinians.” Every effort was made not to hold the Palestinian leadership responsible for a failure that had been repeated over and over, according to the prince.

He also spoke about the help the Kingdom provided to Reagan during the conflict in Nicaragua in 1985, and how that was used to serve the Palestinian cause. “The truth is we did not interfere but had an interest,” he said. “In 1986, King Fahd asked me to suggest to President Reagan that something be done for the Palestinian cause.

In fact, I met with the president and asked him for that.

“President Reagan agreed but the secretary of state objected. The Americans said that if the Palestinians recognized Resolutions 242 and 338, renounced terrorism and acknowledged the right of the region’s states to live in peace and stability, they were ready to recognize the organization.

“King Fahd asked me to go immediately to Tunisia and meet (Arafat) who (reacted the same way he had to Carter’s) offer: He danced and said that Palestine had been liberated, and he hugged and kissed me. I asked him, ‘What about the declaration in collaboration with King Hussein?’ He said, ‘That is impossible; I have Arab manners and must go to the Kingdom, kiss King Fahd and thank him before going to King Hussein.’

Prince Bandar said that he made his private jet available to Arafat, who used it to go to South Yemen, North Korea and African and Asian countries before flying to the Kingdom.

Prince Bandar also highlighted Saudi Arabia’s demand for a firm stance against Israel during its attack on Palestinians in Lebanon. He noted that the US asked Saudi authorities to condemn the Syrian army that had besieged Arafat in Tripoli, in exchange for condemning Israel. The Kingdom refused. “I am trying to say that all the time, opportunities were lost,” the prince said.

He also told how King Fahd forced Reagan to delete a paragraph about the Middle East from a speech the president was due to give during an official dinner when the king visited the US in 1985. The prince said: “King Fahd asked me to ask the national security adviser to delete the paragraph about the Middle East, otherwise the reply would not please President Reagan and the visit would be unsuccessful.” Reagan agreed and the paragraph was deleted.

The paragraph in question began by saying: “My friends, President Carter, President (Anwar) Sadat (of Egypt) and (Israeli) Prime Minister (Menachem) Begin made history with the Camp David Accords, and I wish that you, Israel’s prime minister and I will make history once again.”
Prince Bandar said: “We did not have any bids or slogans to sell. We had positions and work.”

He added: “From 1985 to 1993, the Palestinians negotiated the Oslo Accords and did not inform the Egyptians. President Hosni Mubarak told me that he found out about the Oslo Accords from (Israeli Prime Minister Yitzhak) Rabin.”

All of this was on an international level. As for Arab and Gulf states, the leaders of the Palestinian factions stood against the restoration of Kuwaiti legitimacy after the Iraqi invasion in 1990. They hurt the Palestinian cause without assessing the situation correctly, and the disagreements between the Palestinian leaderships emerged to make matters worse.

The worst example of this came when the leadership of Fatah in the West Bank split from Hamas in Gaza. The Egyptians made efforts to heal the split, and Saudi Arabia’s King Abdullah hosted the Palestinian leaderships in Makkah in an attempt to broker peace. The national reconciliation agreement was signed under the auspices of Saudi Arabia but only a few days later the agreement, which was signed in the vicinity of the Holy Kaaba, was violated.

During his interview, Prince Bandar was extremely honest as he detailed the mentality of the Palestinian leadership that we are dealing with today. He also emphasized one of their biggest failings, saying: “Whenever they asked for advice we would stand by them, and we justified their mistakes to the world, even though we knew they were wrong.”

It is shameful that their behavior caused inaction, which led to arrogance, superiority and selfishness. Even taking all that into consideration, Prince Bandar said: “We did not stand with anyone against them.”

He also revealed a more recent development that is dangerous for the Palestinian cause: Palestinian leaders have renounced their relationship with Arab brothers who have provided them with support and assistance for 70 years. They have chosen new allies without taking into consideration those allies’ goals and expansion projects in the region.

Prince Bandar said that the Palestinian leadership has joined forces with parties that are the most harmful to their cause, most notably Iran and Turkey. Iran uses the Palestinian cause, and the repercussions of its interventions can be seen in Iraq, Syria, Lebanon and Yemen. The situation does not require further explanation.

As for Turkey, and its dreams for the return of the Ottoman caliphate, its actions can be seen in Iraq, Syria, Qatar, Libya, Cyprus and the eastern Mediterranean, and although it promotes opposition to Israel, it has strong ties with the country.

The accusation of treason made against Gulf leaders by the Palestinian leadership is nothing new, but it escalated last month after Bahrain and the UAE signed an agreement to normalize relations with Israel, even though there are existing agreements between Israel and Egypt, Jordan and the Palestinians themselves. The prince noted that Lebanon has also sought to demarcate its borders with Israel as part of a new peace agreement.

However, the impertinence shown to the Gulf states has reached a new high. “The lowly and impudent talk,” is how Prince Bandar described the language the Palestinian leadership used when reacting to Bahrain and the UAE signing the peace agreement with Israel.

It also upset Iran and Qatar, and consequently there has been a propaganda war waged against Bahrain and the UAE. Iranian news channels and the Qatari Al-Jazeera took it upon themselves to twist and blur the truth and falsify facts, even though everyone knows that Bahrain and the UAE support Palestinian rights — primarily, the two-state solution from the 1994 Oslo Accords, with East Jerusalem as the capital.

The failure of the Palestinian Authority to achieve a political process that helps and benefits the Palestinian people in any way led the authority to choose to avoid finding a solution when the recent peace agreement with Israel was signed. Instead, they turned to parties that oppose Arab states and threaten their security, such as Turkey. It is a step that underscores their real failure.

Home » How Palestinian Leaders Squandered Saudi Support For Their Cause – Analysis