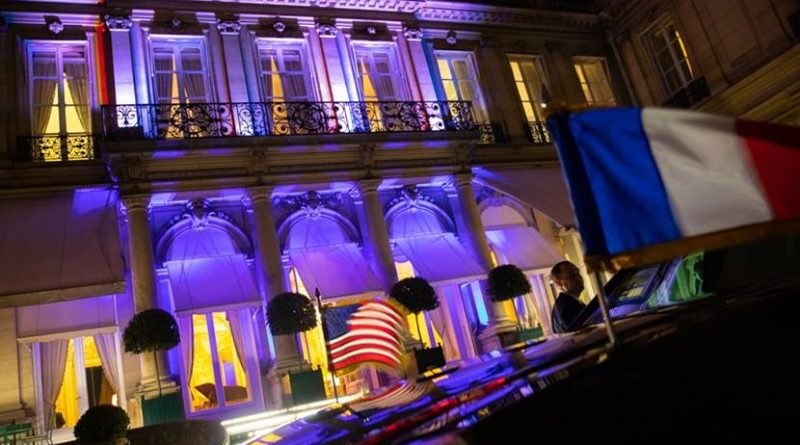 The U.S. Ambassador to France residence is lit in the colors of the United States and France for the arrival Friday evening, Nov. 9, 2018, of President Donald J Trump and First Lady Melania Trump to Paris. (Official White House Photo by Shealah Craighead)

(RFE/RL) — French President Emmanuel Macron is hosting some 70 world leaders in Paris to commemorate the centenary of the armistice that brought an end to World War I on the 11th hour, of the 11th day, of the 11th month.

Guns fell silent on November 11, 1918, ending the four-year war that killed at least 10 million soldiers and millions of civilians.

Macron will pay tribute to the fallen soldiers in a speech at the Arc de Triomphe, where an unknown soldier killed in the war is buried.

U.S. President Donald Trump, German Chancellor Angela Merkel, Russian President Vladimir Putin, and Turkey’s Recep Tayyip Erdogan are among the leaders scheduled to participate, then attend a lunch with the French presdent at the Elysee Palace.

In a dinner late on November 10 with many of the visiting leaders, Macron warned against taking peace for granted.

“Some of us were on opposite sides at the time [of WWI], and we are reunited tonight. That is the greatest homage we can pay” to the fallen soldiers,” he said.

Macron on November 11 will also host the first Paris Peace Forum, which seeks to promote a multilateral approach to security and governance.

Merkel said the forum showed that “today there is a will, and I say this on behalf of Germany with full conviction, to do everything to bring a more peaceful order to the world, even though we know we still have much work to do.”

Trump is not expected to attend the forum ceremony, although Putin is.

Trump has said he will not hold a bilateral summit with Putin in Paris, with the White House saying he did not want to overshadow the WWI ceremonies.

They are likely to meet at the G-20 summit in Buenos Aires later in the month.