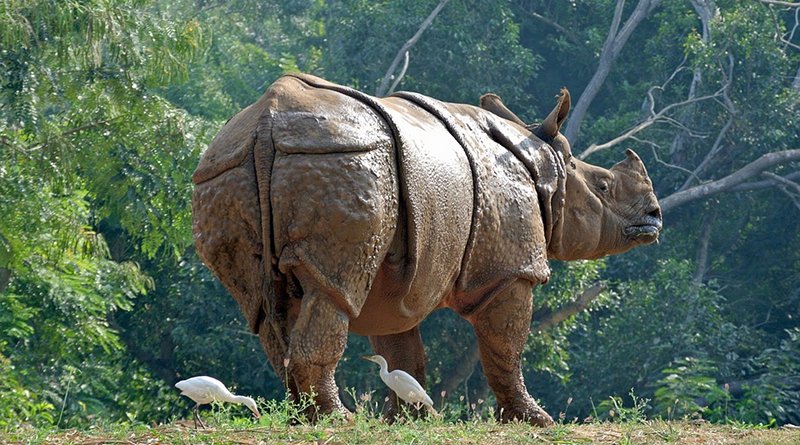 A group of scientists are going to produce artificial rhino horns and make it available in the black market. The realistic fake rhino horns are made from horse hair in an attempt to reduce illegal poaching.

The scientists plan to flood the black market with the fake rhino horns to reduce its commercial uses and to help poaching in India (Assam) as well as in Africa. The horns made with horse hair look real under the microscope and could help lower the price of illegal horns.

The high price of rhino horn leaves a bloody trail across the globe. In South Africa alone, 769 rhinos were poached in 2018, and there have also been attempts to steal rhino horns from museums in Europe. In Assam, rhino poaching or deaths have not been stopped and many death cases have been kept under cover. At least 50 Rhinos died in Assam in 201 . A total of 239 one-horned rhinos have been killed by poachers in Assam, India from 2001 to 2016, and despite high security, most were from Kaziranga National Park, which accounted for 161, the state assembly was told by the department of forest of Assam.

According to the scientists from the University of Oxford and Fudan
University, Shanghai, this will be done by demonstrating a way to a vastly cheaper copy that can be used to infiltrate the market. “The economists seem to think that if you flood the market with substitutes, the price will drop,” said Prof Fritz Vollrath, the co-author of the research at the University of Oxford. “If the price drops and the penalty of having rhino horn is still very high, then the value proposition changes for the trader” he said. The study was published in the journal Scientific Reports.

Now scientists say they have made a convincing fake rhino horn by gluing together the hair of a horse’s tail, stripped of its outer layer. It is exactly same with horn of rhino unlike horns of other animals like cow, buffalos, deers, goats etc. The team say they chose horse hair because the animal is a close cousin to the rhinoceros, while the hairs have similar dimensions to the keratin filaments – or hair – that the team say make up rhino horn. The team uses “glue” which is a silk-based substance they say emulates the materials that fulfill the role in real rhino horn. They used cellulose also in the artificial mix to resemble the plant material that is incorporated when the animal sharpens its horn.

It is surprising that this material developd artificially shows similar chemical properties like rhino horns. The resulting material, said Vollrath, can easily be moulded into a rhino horn shape, dried under vacuum in a hot oven and polished. The upshot is a material that shows similar mechanical properties to the real deal, feels similar and even looks similar under a microscope. Analytical studies demonstrated similarities in composition and properties between natural and faux horns.

“It appears from our investigation that it is rather easy, as well as cheap, to make a bio-inspired horn-like material that mimics the rhino’s extravagantly expensive tuft of nose hair,” the authors write. According to the researchers, it is important that plausible copies should be simple to produce while being very similar in both structure and chemical composition. Co-author Ruixin Mi, from the Department of Macromolecular Science at Fudan University, says their study demonstrates that materials science can contribute to fundamental issues in biology and conservation.

“The fundamental structure of the rhino horn is a highly evolved and tough fibre reinforced bio-composite and we hope that our attempts to copy it will not only undermine the trade in rhino horn but might also find uses as a novel bio-inspired material,” Mi said.

The team believe the development could lead to the rhino horn market being swamped with faux horns, thereby sowing confusion and causing a  price crash – making it less profitable for poachers to source the real thing.

“[The idea is] any punter who wants to spend 1,000 quid on a couple of grams says, ‘Wait a minute, what is my probability that my stuff is real or that it is just horse hair?'” said Vollrath. “It is just rattling the market.” However, the team say it will be up to others to develop their idea.

The latest study is not the first to look at the possibility of producing fake horns. Among those working on the idea is the start-up Pembient, which is attempting to bioengineer fake horns that are genetically identical to the real thing. The first are reportedly expected to go on sale in 2022.

Dr Richard Thomas from the wildlife organisation Traffic said that while the latest study had good intentions, it posed considerable risks. “Pushing a synthetic alternative could help to reinforce the perception that rhino horn is a desirable commodity, thus perpetuating existing demand, while presenting consumers with a synthetic alternative may actually stimulate demand for the real thing, thus exacerbating the existing situation,” he said.

Thomas added that another problem was that unlabelled fake horn might bring legal and enforcement challenges. Fake horns may help smugglers to tranport although Vollrath said experts would be able to spot the fake. Vollrath says this can be achieved through long-term consumer behavioural change interventions coupled with strong enforcement measures to deter would-be and existing consumers of rhino horn.

“This initiative to flood market with artificial horns, I doubt, would do more harm than any good. It would only reaffirm the faith of the users on the so called curative properties of the horn and could be a setback to the existing conservation strategies’ said Mubina Akhtar, an environmentalist from Assam, india. In India, people driven by superstitions believe in  rhino horn as a protector of evils and misfortune. They use a piece of horn with purpose of ornamental as well as astrological. In South-east Asian countries powder if rhino horn is used in traditional medicine.

Rhino horn is believed to have many benefits in Chinese medicine, including working as an aphrodisiac.  Horns are in demand for a range of uses, from traditional Chinese medicine to ornamental carvings, and the
illegal international trade is thriving. As such, it is important to reduce demand for rhino horn and scientists think so.

*Chandan Kumar Duarah is a former Robert Bosch Fellow, an environmentalist and Guwahati based journalist.