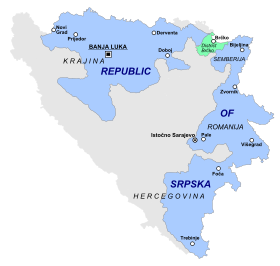 Location of Republika Srpska in Bosnia and Herzegovina.

Bosnia’s Serb-dominated Republika Srpska entity has suspended all cooperation with the state-level police, court and prosecution in a dramatic escalation of the country’s political crisis.

The Republika Srpska government said on Thursday that it has halted all cooperation with the State Investigation and Protection Agency and the state prosecution after they arrested five Bosnian Serbs for alleged war crimes in Bosanski Novi and searched official buildings in the Republika Srpska town for evidence.

“The RS government believes that this action represents a serious violation of [the agreement with the state-level authorities on] police cooperation and an unconstitutional act,” Republika Srpska Interior Minister Dragan Lukac told a press conference.

Lukac said that the government has ordered his ministry to prevent state police or prosecutors entering or investigating any entity or municipal offices in Republika Srpska.

At an emergency session of the entity’s National Assembly to discuss the situation, Republika Srpska President Milorad Dodik said that the Bosnian court had gone against all previous practices and ageements.

“It could have triggered armed conflict. That conflict is being prevented only because we are responsible,” Dodik said.

He said that cooperation with the state-level police, court and prosecutor would be suspended until Bosnia establishes suitable procedures to prevent such situations occurring again.

“We will carry through on these conclusions, don’t test our will,” Dodik warned.

But Bosnian prosecution spokesperson Boris Grubesic said that the arrests and searches of official buildings in Bosanski Novi on Thursday morning were carried out “lawfully” and expressed surprise at the reaction from Republika Srpska.

“The searches in the police station, municipal building and the company were ordered by the Bosnian state court, because there was evidence that the police and civilian protection forces in Bosanski Novi were actively and directly involved in the process of removing and hiding the bodies and mortal remains of 27 [war] victims from the village of Maslovare,” said Grubesic.

“The Bosnian state level prosecution and court and [State Investigation and Protection Agency] SIPA are working in line with the law and their jurisdiction and in this process, no institutions or persons are no untouchable. Every attempt to stop the judiciary doing its job is a criminal act which can be prosecuted,” added Grubesic.

SIPA said it had received no official complaint from Republika Srpska so far.

“We emphasise that SIPA acted within its legal jurisdiction and in line with clear orders from the Bosnian prosecution, so any comment on the political decisions of some institutions would be unprofessional and outside our jurisdiction,” SIPA said in a statement.

The development represents a dramatic escalation of the political crisis which started almost immediately after the 2014 elections, when Bosniak and Croat parties asked a bloc of Serb opposition parties to join them in the ruling coalition at the state level, circumventing the ruling party in Republika Srpska, the Alliance of Independent Social Democrats, SNSD.

This triggered a major conflict between the ruling and opposition parties in Republika Srpska, as each side tried to extend its political control to include both the state-level and entity governments.

Earlier this year, SNSD leader and Republika Srpska president Milorad Dodik launched an initiative for a referendum to challenge authorities of the state judiciary and the Office of the High Representative, Bosnia’s top international official responsible for overseeing the implementation of the 1995 Dayton peace agreement.

The move was denounced by official both inside the country and internationally, and even drew criticism from Serbian Prime Minister Aleksandar Vucic.

However Thursday’s decision by the Republika Srpska government effectively pre-empts results the disputed referendum and is likely to seriously deepen the country’s crisis.

The five Serbs were arrested earlier on Thursday on suspicion of having committed war crimes against Bosniak civilians in the Bosanski Novi area in 1992.