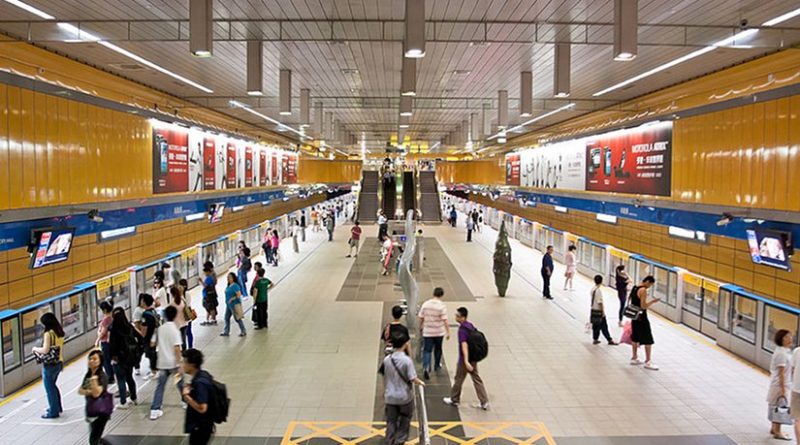 Taiwan is a densely populated island where traffic, especially in urban areas, is intense and scooters are the top mode of vehicular transport. There are 15 million registered scooters in Taiwan, which is nearly one scooter for every adult person in a population of 23.5 million people, and 7,730,000 cars.

Moreover, the city of Taipei, the island’s metropolis, is located in a basin which traps all the air pollution produced by petrol engine emissions. Fortunately, the dwellers of Taipei City and New Taipei City have a choice about whether to bestride a scooter, drive a car or use public transport. In fact, public transportation in greater Taipei is efficient and ubiquitous with excellent Mass Rapid Transport (MRT) and bus systems affording easy and fast urban mobility.

East Asia is at the forefront in creating efficient and effective public transit and, like other nodal cities in the region, Taipei and New Taipei City are – out of both necessity and vision – leading the way to a paradigm of sustainable and decarbonized mass mobility by implementing technologically enhanced and environmentally smart transport strategies combining green urban governance with economic growth. Public capital such as railways and metro lines stimulate the economy, and the case for mass transport infrastructures can be made also in terms of inter-linked social and environmental benefits.

On the other hand, the out-turn of underinvesting in public transportation infrastructure would be grave. For this reason, high-speed, light rail and metro rail projects all have priority-status in Taiwan, which is particularly keen on exploiting the mass transit capacities of metro networks to reduce congestion and pollution in highly-populated areas, foster economic resilience and function as a catalyst for urban renewal. The island has two operative metro systems, respectively in Taipei and Kaohsiung, and more are being constructed and planned.

Taipei Metro, Taiwan’s first MRT, began operations in 1996. Presently, it consists of 117 stations and 5 main routes, operating on 131.1 kilometers of revenue track. The system, which in 2016 carried an average of 2 million passengers per day, is globally regarded as an ideal model for mass transit every city should emulate. The MRT is remarkably punctual and immaculately clean, abides by the strictest efficiency and safety standards, and boasts a customer satisfaction rating of 94 percent. As such, it greatly contributes to Taipei’s infrastructural prestige and is an essential vector of Taiwan’s soft power.

Given the insular character of Taiwan, Taipei is the gateway for most of international arrivals. Once in Taipei, visitors normally take at least a ride on the MRT, and usually become enthusiastic users of the system. The Taipei Metro experience, therefore, shapes the international image and narrative about Taiwan. The MRT is as much iconic as the Taipei 101 skyscraper in representing Taiwan as a modern, vibrant and affluent society: a glimpse of what is possible when ambitious planning and engineering prowess meet.

The soft-power dimension of the MRT is particularly important in consideration of Taiwan’s peculiar international status. Vis-à-vis the relentless efforts of the People’s Republic of China to isolate Taiwan and deny its statehood and separate identity, pursuing infrastructural virtuosity is an effective way of boosting the island’s limited international profile. The world-wide visibility that Taipei’s metro system bestows on Taiwan is therefore of pivotal importance for keeping it on the map and projecting a positive global image of its society.

In addition, the MRT also serves the purpose of reminding the people of Taiwan about what they can achieve collectively and separately from the Mainland. It is a marker of Taiwanese identity. One wonder every Taiwanese takes pride in and the international community admires.

Taipei Metro strives for the highest, but it is not perfect though. One of its points of weakness is the relatively small number and scope of destinations. For this reason, the system has more lines under construction. Notably, from March 2017, the Taoyuan International Airport MRT, a rapid transit system connecting Taipei City and Taipei Taoyuan International Airport, will begin commercial operations. Given that Taoyuan Airport is Taiwan’s main hub, an MRT line integrating it into Taipei’s mass mobility network is of strategic consequence. It will be the fourth metro system in Asia to allow passengers to stop directly at an international airport, becoming a first-contact and image-building infrastructure for visitors to the island. Signally, a dedicated MRT station already caters to travelers to and from Songshan Airport, Taipei’s other air terminal, which is located downtown.

For the sake of maintaining and seeking excellence in the expansion process of the MRT, procuring and utilizing the best engineering and technology available in the market is imperative. Hence Taiwan, over the years, has been consistently forging partnerships with international industrial manufacturers for realizing its rapid transit infrastructure and equipping it with the safest and most advanced rolling stock.

This was the case in 2009, when Taipei’s Department of Rapid Transit Systems awarded a €334 million turnkey contract for the first section of the Taipei Metro Circular Line – stretching from Wugu Industrial District to Dapinglin – to a consortium of two Italian companies: Ansaldo STS and AnsaldoBreda (now Hitachi Rail Italy). The former received a €220 million order for E&M equipment and radio signaling technology. The latter secured a €114 million deal to supply 17 driverless four-car trains. The Taipei Metro Circular Line is an elevated, medium-capacity rapid transit which will further enmesh Taipei and New Taipei City in the MRT system and synergize their industrial and technology parks. It is currently under construction with the first 15.4 km-long section – 73.45 of which is already in place – scheduled to open along 14 stations in late 2018.

Why two Italian suppliers? Simply put, because Italy is a powerhouse of railway technology. Italian companies have been successfully operating for decades all over the world in the railway construction industry and in solutions for control and management of railroad traffic. In many sectors, Italy is a synonym of style. When it comes to the railway business, it is also signifies total quality.

Having those two Italian actors playing a key role in the evolution of Taiwan’s mass rapid transport was thus an informed and forward-looking decision. The two firms are twin global beacons of the industry operating in five continents: in Copenhagen as in Miami; from the plains of Holland to the sands of Saudi Arabia. In Taiwan, they intend to become strong and dedicated long-term partners to the local market. In the words of Maurizio Manfellotto, CEO and President of Hitachi Rail Italy, “Taiwan is strategic for my company.”

Hitachi Rail Italy is a company specialized in the manufacture of technologically advanced rolling stock. Before 2015 it was known as AnsaldoBreda, the most important Italian brand in the rail and metro sector, with more than 160 years of history. Acquisition by Hitachi has made the company strategically and operationally even more global-oriented, while keeping its roots firmly anchored in Italy. The driverless train for the Circular Line – developed at a highly automatized workshop in the Italian city of Reggio Calabria – is a product of the mating of a venerable manufacturing tradition with top-level rolling stock technology. In late November this year, the first of the 17 trains arrived to Taipei from Italy for static testing on the line. The four-car piece of engineering is 68.5-meter long, has a slick aluminium alloy bodyshell, a 650-people capacity, and can operate at maximum speed of 80 km/h.

The trains are due for delivery by late 2018, in time for the commissioning of the first section of the Circular Line. Mr. Manfellotto, reached on the phone, guaranteed that the machines will be handed-over punctually. “Together with the rolling stock, Hitachi Rail Italy will also transfer valuable know-how and bring highly-qualified jobs to Taiwan. In fact, apart from the prototype, the trains will be made jointly with Taiwanese partners,” he said. “Taiwan ranks high in our industrial strategy. It does so not only because it is a growing market for all our products, but also because our Taiwanese institutional interlocutors have always behaved with the utmost competence and fairness. This has encouraged us to continue increasing our commitment to Taiwan,” he added.

If the big picture is considered, the activities of Hitachi Rail Italy in Taipei exemplify the intensifying trade relations between Taiwan and Italy. Italy is now Taiwan’s fifth-largest trade partner in the EU, just behind Germany, the Netherlands, the UK and France, with two-way trade reaching US$4.13 billion in 2014. In December 2015, with the aim of facilitating their economic exchange, the two sides signed an agreement on avoidance of mutual taxation. Railway technology – together with precision engineering, industrial machinery, lifestyle goods and gastronomy – is increasingly becoming a high-profile ambassador of Made in Italy in the island.

Indeed, international companies like Hitachi Rail Italy, or brave Italian entrepreneurs venturing in Asia, are modern-day Marco Polos and Matteo Riccis weaving robust and lasting ties between East and West. Taipei Metro customers riding on safe, efficient and comfortable Italian trains will be a strong reminder of how economic and technology partnership – even more than political interaction – can shape and promote friendly and fruitful relations between two societies travelling full speed on the train of globalization.