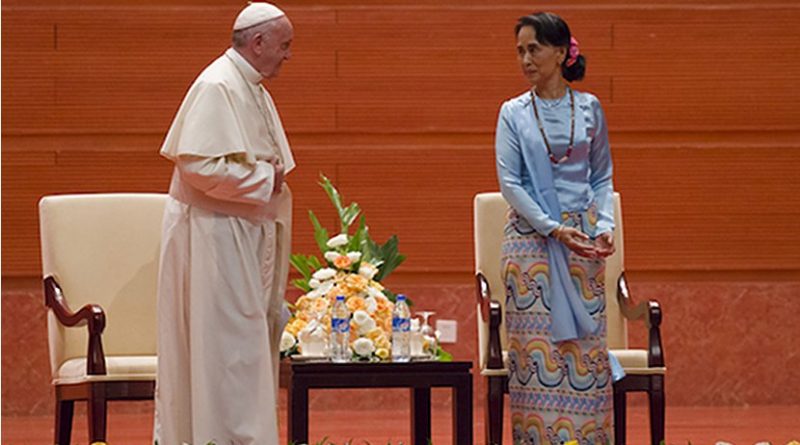 This paper analyses the challenges that Pope Francis confronted during his trips to Myanmar from 27 to 30 November 2017 and Bangladesh from 30 November to 2 December 2017 in an effort to defuse the tensions created by the Rohingya crisis between Myanmar and Bangladesh, and to draw the attention of the world to this massive humanitarian crisis. He seemed unswayed by either praise or criticism, and he drew both. He was able to demonstrate that while, as Pope, he might not command any military divisions, as former Soviet Union dictator Joseph Stalin had disdainfully observed, but he had the courage to attempt at more than what many other leaders did.

Former Soviet Union dictator Joseph Stalin was said to have queried, with a modicum of unjustifiable derision, as to how many military divisions the Pope commanded. This was reportedly a quip addressed at the French Foreign Minister Pierre Laval on 13 May 1935. It happened when the Frenchman had suggested that the Pope would appreciate it if the harassment of Catholics in the Soviet Union was stopped.

Given Stalin’s own intensely amoral political predilections, he obviously had failed to take into account the Pope’s moral power, or so the received wisdom goes. Stalin’s assessment was that, whatever strength the Pope possessed would cower under the pressure of Soviet tanks. His remarks have drawn much ire since then, and have been much criticised. Eighty-three years down the line when the current Pope gave in to a junta of a much lesser military entity in Myanmar whose treatment of minorities is seen to be no different from that of the Soviets during Stalin’s time, by trying not to offend them by naming those being persecuted in the country, one could be forgiven for recalling the unfair utterances of the communist dictator – not to endorse, of course, but to understand!

The Irish poet and playwright, Oscar Wilde, had once observed, through a character in his play, The Importance of Being Earnest, that, if one isn’t a dentist, one should eschew talking or behaving like one, because it unnecessarily creates a false impression. No one would expect, of course, the Pope to gather wisdom through Wilde’s epigrams, however witty and famous. If he was acting like a diplomat without being one, it was perfectly understandable as, apart from being the Pontiff, he was also a head of state – one who might control a geographically tiny territory, but held sway spiritually over a billion people around the world.

Also, Pope Francis has earned for himself the distinction of being a champion of human rights around the world. This comes at a time when these values are taking a backseat in the foreign policies of more powerful countries such as the United States. However, it has to be said, to the credit of Washington that, on the issue that this article is focussed – the Rohingya crisis – American policymakers such as Secretary Rex Tillerson and Ambassador Nikki Haley have taken a remarkably strong position in defence of the persecuted, as has the Anglican Protestant stronghold, Oxford, in the United Kingdom (UK). In the past, Pope Francis has described the alleged Armenian massacre by the Turks during World War One, thus arousing Ankara’s wrath, just as he has regretted the Vatican’s silence over the 1994 Rwandan tragedy.2 While still in the Vatican, prior to his recent trip, the Pope had also denounced the “persecution of our Rohingya brothers”.3 Indeed, largely motivated by a desire to address the crisis, the Pope decided to undertake the trip to the region in late November and early December 2017.

As of August 2016, over 620,000 Rohingyas had fled alleged Myanmarese persecution from the Rakhine State of Myanmar to neighbouring Bangladesh. This was in addition to an earlier outflow of 300,000 of the Rohingya Muslim minority whom Myanmar would not accept as ‘nationals’ (nor would tolerate reference to them as ‘Rohingyas’), calling them ‘illegal Bengali migrants’ instead (despite their presence there for centuries).

Those who fled the Rakhine State carried horror stories of rape, loot and arson perpetration by the Myanmar army known as the Tatmidaw, in concert with extremist Buddhist monks. Since these numbers constituted over 95 per cent of the Rohingya population in Rakhine, the United Nations (UN) took a very grim view of the situation, describing it as ‘a textbook case of ethnic cleansing’ in a statement to the Human Rights Council in Geneva by the UN Human Rights High Commissioner Zeid Raad el-Hussain (who also called for an end by Myanmar to the “cruel military operation”).4

A global outcry of criticism followed, directed mainly against the Tatmidaw, but also vis-à-vis the Nobel laureate Aung San Suu Kyi, with some activists calling for her Nobel award to be rescinded. Indeed the City of Oxford in the UK stripped her of its ‘Freedom of the City Award’, its highest distinction (awarded in 1997), on grounds of her “inaction in the face of her oppression of the minority Rohingya population”.5

By the time Pope Francis headed to Myanmar and Bangladesh in late November 2017 for the much publicised trip with a view to defusing the crisis, expectations were running high. He was warmly received in Myanmar by the government and most enthusiastically by its 700,000 or so Catholics.

However, what was noteworthy in Myanmar was not what he had said, but what he had not uttered. Reportedly advised by Cardinal Bo of Myanmar, he refrained from using the term ‘Rohingya’ in any of his public remarks. While the Myanmarese authorities were pleased by this, human rights activists and, in particular, the Rohingyas were deeply disappointed. The champion of justice and the opponent of tyranny was seen as kowtowing to the authorities, not out of deference most certainly, but out of fear! The Pope later explained it as flowing from fear, but only for what he would have failed to achieve in terms of his mission had he gone public with using the word ‘Rohingya’ in Myanmar. The mention of the word, he stated, would cause doors in Yangon to be shut on him. That would have prevented him from raising the issue privately with those who rule the country. He said he had done that and expected some fruit. Many who know the Myanmar system could state that this was simply placing hope over experience. Still, he had been able to do what many heads of governments, near and far, had not, either for fear of affronting Yangon or simply according lower premium to nobler values. Also, he rendered a yeoman’s service to the cause of the persecuted humanity by ensuring global media attention on the issue while he was there. This in itself was no mean achievement.

As was predictable, the Pope ultimately used the term ‘Rohingya’ in an emotional meeting with the escapees while in Bangladesh. “The presence of God is also called Rohingya”, he declared in an impassioned address.6 While the human rights activists cheered, there was the inevitable despondency and anger in circles in Myanmar. While the government was politely and, perhaps, wisely unresponsive in Naypidaw, the social media was trenchant in its fury. One blogger angrily posted in the ‘Facebook’, “He should say the same things (everywhere) if he loves the truth”.7

“What’s in a name?” Shakespeare’s Juliet had beseeched her beloved Romeo, arguing that his name of ‘Montague’ (a family inimical to her own, the ‘Capulets’) should make no difference to their shared sentiments. The answer to that would be plenty if one were to judge by the predicament Pope Francis confronted at the present time. However, contrary to the view proffered by some that the Pope rushed in where angels fear to tread, the head of the Catholic Church actually displayed courage by the very fact of choosing to expose himself to criticism rather than avoid a responsibility he felt he should discharge. In doing so, he has done more than other world leaders who have many military divisions under their command.

About the author:
*Dr Iftekhar Ahmed Chowdhury is Principal Research Fellow at the Institute of South Asian Studies (ISAS), an autonomous research institute at the National University of Singapore (NUS). He is a former Foreign Advisor (Foreign Minister) of Bangladesh. He can be contacted at [email protected] The author bears full responsibility for the facts cited and opinions expressed in this paper.

Source:
This article was published by ISAS as ISAS Briefs No 532 (PDF).

Home » Diplomacy And Papacy: How Do The Twain Meet? – Analysis