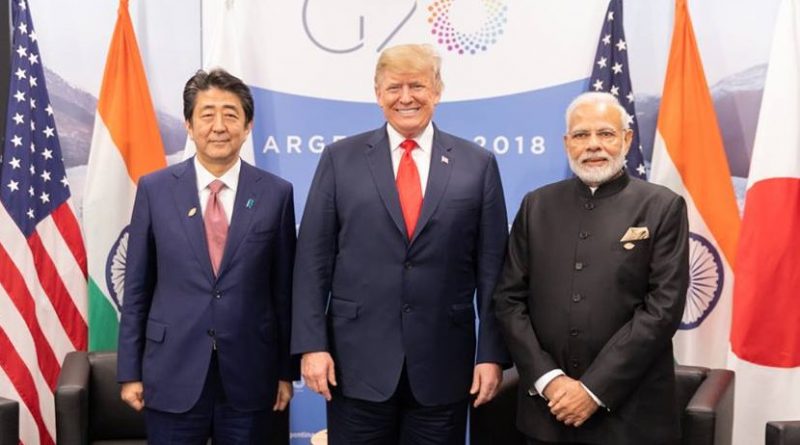 Indian Prime Minister Narendra Modi participated in several bilateral and multilateral meetings on the sidelines of the G-20 Summit in Argentina. Such meetings are not unusual. However, this year, two trilateral meetings that PM Modi was apart of drew significant attention. One meeting was held between India, Japan and the US, called JAI (Japan, America and India), and the other trilateral was called RIC (Russia, India and China). The composition of these meetings,representing countries that are often in contest, with India as the only common participant, is a positive development from India’s perspective. While some may consider this Indian opportunism or a ploy to benefit from both formations, itis more useful to recognise India’s intention to work as a bridge between differing world views. It is an open message from India: that both groupings have important roles to play in achieving a stable, prosperous and peaceful global order. Any future economic and security architecture of the region must be inclusive, and India is willing to take the diplomatic leap to emphasise this point.

JAI was the first trilateral meeting of its kind. All three participating countries stressed the import of a “free, open, inclusive and rule-based” order as essential for peace and security in the Indo-Pacific. Modi spoke of “shared values” as the basis for regional economic growth. He noted that the acronym JAI translates as “success” in Hindi, and that cooperation would undoubtedly “enhance connectivity, maritime cooperation and stability inIndo-Pacific.” India suggested five action points for the grouping: connectivity, sustainable development, disaster relief, maritime security and unfettered mobility. It is important to remember that the US, Japan and Australia, along with India, have been articulating their Indo-Pacific strategy, which is considered to be aimed at containing China’s ‘assertive’ behaviour in the region.

The articulation of the quadrilateral network and annual joint Malabar naval exercises are seenas elements of this same broad strategy. India is viewed as a consequential member of this formulation, and there have been several calls for more active participation. While India’s role and significance in the Indo-Pacific arisesfrom its geopolitical positioning and as a lynchpin in restraining future Chinese disruption, for India, the vision finds consonance with its goal of afree and fair global order in which any country that plays by the rules is an equal partner. India feels that if China is able to exercise discretion in its behaviour, it could contribute immensely  to the region on both the economic and security fronts. This was underlined by Modi at the Shangri La Dialogue in June 2018, where he said,“India does not see the Indo-Pacific region as a strategy or as a club of limited members. Nor as a grouping that seeks to dominate. And by no means do we consider it as directed against any country.”

India’s participation in RIC meeting must also be seen in light of the above. This was the second trilateral meeting between India, Russia and China, held after a gap of 12 years. The leaders of the three countries acknowledged that their friendship and cooperation would “enhance world peace.” It also announced that all three countries give importance to reform and strengthening of multilateral institutions. In this context, an example of India pursuing balanced and consistent relations with both the US and Russia is its deal with the latter to buy the S-400 missile defence system, despite signs of displeasure from the US. Similarly, India has sought to maintain working relations with China, with Modi most recently meeting President Xi Jinping for an informal summit meet to ‘reset’ India-China bilateral relations in April 2018. India is clearly interested in maintaining its relations with a diverse set of countries, some of whom are often at odds with each other.

The most significant takeaway from the two trilateral meetings is that India is confident and transparent in its intent to work as a bridge between the two apparently contesting articulations for the regional economic and security order. India seeks a ‘third way’ in which cooperation rather than contestation between the US and China is the dominant principle, which will help bring peace, prosperity and stability to the region. These two meetings must thus be seen as complimentary, and in contradiction of each other.

Home » On the Sidelines of G-20: India’s Third Way – Analysis