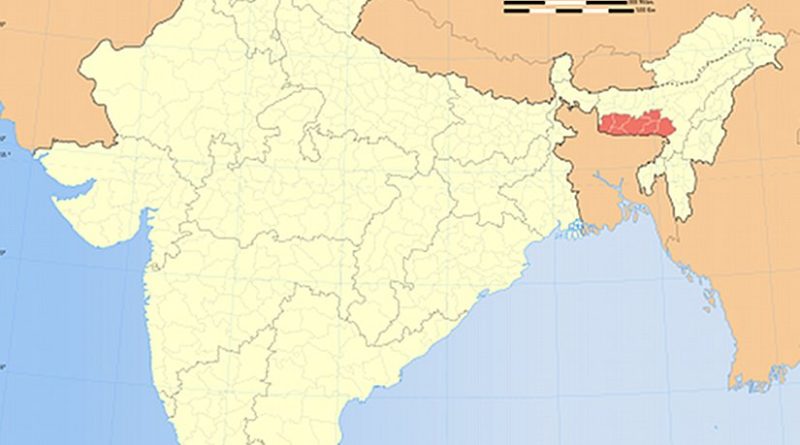 The trend of rising insurgency-related fatalities in Meghalaya continued through 2014, with a total of 76 fatalities, as compared to 60 in 2013, an increase of 26.67 per cent, according to partial data compiled by the South Asia Terrorism Portal (SATP). Consequently, the State continued to hold the dubious distinction of being the second-worst insurgency affected State in the Northeast in terms of overall fatalities, with Assam accounting for the highest number of fatalities at 305. Meghalaya secured this unenviable position for the first time in 2013.

One fatality has been recorded in 2015 [data till January 11]. Two Achik Matgrik Elite Force (AMEF) militants killed a gatekeeper, Entison Sangma (30), at Ronkhugre in the West Khasi Hills District on January 11. “We suspect the killing was for ransom and was the handiwork of AMEF,” said Superintendent of Police, West Khasi Hills, S. Nongtyngnger.

In spite of the rise in fatalities, indices suggest a consolidation of peace in the State. Crucially, civilian fatalities, which had been rising continuously since 2009, registered a decline of 17.86 per cent in 2014, as compared to the previous year, dropping from 28 to 23. Incidents of civilian killing in both years, remained at 20. Civilian killings in 2014 were reported from five Districts – East Garo Hills, West Garo Hills, North Garo Hills, South Garo Hills and South West Garo Hills. These Districts accounted for all the insurgency-linked fatalities in the year, leaving the remaining six Districts of the State outside the ambit of fatal violence. In 2013, fatalities had been reported from seven districts – the five above, as well as West Khasi Hills and South West Khasi Hills.

Fatalities among Security Force (SF) personnel, which had increased sharply in 2013, over 2012, recorded a decline in 2014. Two SF personnel had been killed in 2012; nine in 2013, as against six in 2014. On the other hand, the State recorded the highest single-year fatalities among militants since 1992, with 47 killed in 2014. SFs action led to 27 militant fatalities [in 22 encounters], while another 13 rebel cadres were killed in internecine clashes; seven militants were lynched by angry villagers in 2014. In 2013, militant fatalities stood at 23 – including 15 killed by SFs; six lynched by villagers; one killed in a factional clash; and another one killed by his own group. The ratio of SFs to militants killed improved to 2:9 in 2014, as against 3:5 in 2013.

Mounting SF pressure also led to rising surrenders. 796 militants surrendered in 2014, as compared to just nine in 2013. The A’chik National Volunteer Council (ANVC) and ANVC-B were disbanded at a function at the Dikki-Bandi Stadium at Dakopgre in Tura in West Garo Hills District on December 15, 2014. 748 cadres from both factions – 447 [ANVC] and 301 [of ANVC-B] were present as the ‘chairmen’ of the two militant formations – Dilash Marak [ANVC] and Bernard N Marak [ANVC-B] – signed the Affirmation Agreement at the disbanding ceremony. The ‘commanders-in-chief’ of both outfits, Jerome Momin and Mukosh Marak, respectively, were also present. Chief Minister Mukul Sangma, during the ceremony, termed the former Garo militants as ‘misguided outfits’. However, ANVC ‘chairman’ Dilash Marak opposed the statement, observing, “When we started our war we did not follow any example set by any oppressed or suppressed indigenous group. Our minds were crystal clear. We were not misguided…” This dissonance is significant in the context of a multiplicity of other ‘peace deals’ between Governments in the region and insurgent formations, which have failed to secure an enduring peace. Further, the number of surrendered cadres from each faction was much higher than the Government’s estimated cadre strength, creating the potential for future difficulties between these groups and state negotiators.

Chief Minister Sangma, on June 6, 2014, had declared that as many as 10 militant groups were operating in Meghalaya. These included – HNLC, GNLA, ANVC, ANVC-B, ASAK, UALA, ANLA, ANLCA, A’chik Tiger Force (ATF) and ANUF. Sangma also provided estimates of the cadre strength of each of these: GNLA, over 200 cadres and about 110 new recruits; ANVC, 163 cadres; ANVC-B, 151 cadres; ASAK, 60 cadres; HNLC and UALA, 40 cadres each; ANLA, 15 cadres; ANUF and ATF, 10 cadres each, and ANLCA, five cadres. Of these 10 groups, the centre of activity of nine was in the Garo Hills, while HNLC operated in the Khasi and Jaintia Hills. Sangma, moreover, omitted the name of another militant formation, LAEF arguing that the Government did not want to give undue credibility to this ‘minor group’. With the disbanding of ANVC and ANVC-B the number of active groups has been reduced to eight.

Meanwhile, the State Government continued to bring other Garo militant formations on board the negotiation process. On January 6, 2015, Sangma disclosed that his Government had appointed three interlocutors to hold parleys with various splinter groups operating in the Garo Hills region, with the exception of GNLA. The militant outfits that had declared their presence in the Garo Hills include UALA, ASAK, ANUF, A’chik National Liberation Army (ANLA), ATF, ANLCA and AMEF. Earlier, GNLA ‘commander-in-chief’ Sohan D. Shira, on September 5, 2014, had threatened to conduct a wave of serial blasts in Garo Hills targeting Government institutions and Congress offices in retaliation against Chief Minister Sangma’s alleged policy of ‘sidelining’ Garo outfits in talks, while preparing the groundwork for negotiations with HNLC. Significantly, talks with HNLC are yet to start. On January 7, 2015, HNLC reiterated its readiness for talks, but made it clear that it was not ready for demobilization and disarmament.

Meanwhile, GNLA remains the most dangerous outfit operating in the State. Indeed, of 23 attributable civilian killings in 2014, GNLA was involved in eight, followed by AMEF and ANLA, two each. 11 fatalities remained unattributed. Similarly, of the six SF fatalities, GNLA was responsible for five, while one remained unattributed. As GNLA was most active, it also suffered the maximum number of losses in terms of cadres killed. Of 47 militants killed in 2014, 10 were GNLA; followed by ANVC-B and UALA, six each; ASAK, 4; and ANLA (3).

Significantly, to neutralize GNLA and the Assam based ULFA-I, a counter insurgency (CI) operation, Hill Storm was launched on July 11, 2014. A September 5, 2014, report quoted an unnamed senior Police official involved in Operation, as saying that connectivity between ‘commander-in-chief’ of GNLA Sohan D. Shira and his immediate aides had been partially choked off in the preceding month.

More worryingly, multiple splits in militant outfits operating in the Garo Hills have led to an increase in abduction and extortion cases. Chief Minister Sangma, thus observed, “The major militant outfits operating in Garo Hills region have been demanding a separate Garoland, while the new outfits are mostly groups of deserters from ANVC, GNLA and others, who are mostly engaged in extortion and kidnappings and have no specific demands or ideology”. The split in GNLA led to the formation of the Garo National Liberation Army-Faction (GNLA-F) in 2013, which rechristened itself ASAK in February 2014. In 2014, ASAK split further and AMEF was formed. According to partial data compiled by SATP, there have been a total of at least 54 recorded incidents of abduction in 2014, in which 70 civilians were abducted (29 persons were rescued or released, one was killed, Information about the remaining 40 is not available). In 2013, there were 17 reported incidents, in which 36 persons were abducted. Open source data on abductions and extortion is severely inadequate to gauge the scale of such incidents, since reported instances is likely to be a fraction of the actual. Indeed, according to an unconfirmed July 4, 2014, report, 175 persons were abducted for ransom between June 2013 and June 2014, and 98 just between January 1, 2014, and June 30, 2014. 19 incidents of extortion were also recorded through 2014, compared to 17 such incidents in 2013, according to the SATP database.

Though no pro-Inner Line Permit (ILP) agitation was recorded in 2014, such agitations and consequent violence in 2013 had resulted in loss of over INR 310 million to the State. ILPs are issued under the Bengal Eastern Frontier Regulation, 1873, and are required by Indians other than natives of Nagaland, Mizoram, and Arunachal Pradesh to enter these States, and there has been a periodic demand by locals to extend this provision to Meghalaya as well.

Meghalaya boasts a fairly high Police-population ratio of 416 per lakh population, compared to an all-India average of 141. However, Police-density remains low, at 49.9 policemen per 100 square kilometres, when compared to an all-India average of 54.7. On July 7, 2014, Chief Minister Sangma noted, “There is shortage of Police manpower to deal with regular crime, militancy and investigation. Hence, the Government has decided to look forward to creating the new infrastructure taking into consideration the present scenario.” In one such attempt, a dedicated special unit for tackling insurgency, Special Multi-Task Force or Special Force 10, is to be set up by September 2015, with a maximum of 1,200 recruits. SF 10 will be deployed for counter insurgency operations.

Perhaps the most significant long-term challenge is to secure international borders. Meghalaya shares a 443-kilometre-long border with Bangladesh, of which around 70 kilometers is unfenced, along terrain that is difficult to patrol. 57 camps and hideouts of various militant formations operating in India’s Northeast, including those of GNLA and HNLC, still exist in Bangladesh. The Union Ministry of Home Affairs (UMHA) on April 16, 2014, criticised the State Government for its tardy approach to completing the fencing of the Bangladesh border. An unnamed UMHA official noted, in April 2014, “There are a lot of local issues that have to be addressed by the State Government. The MHA can only implement construction work when the State has given all clearances, as land is a state subject. The slow approach in solving these problems is proving costly for national security.”

The broad trends in Meghalaya appear positive at present, but unless decisive steps are taken against the remaining insurgent formations operating in the State, the dangers of an abrupt escalation will remain. Given the enveloping instability of the regional situation, moreover, there is always the risk of an overflow of troubles across state and international borders.