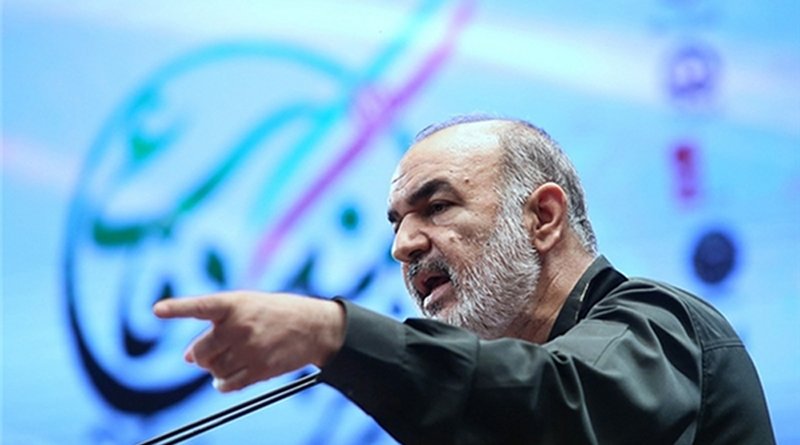 Commander of the Islamic Revolution Guards Corps (IRGC) Major General Hossein Salami voiced regret over the incident which happened for the Ukrainian plane over the Iranian airspace.

“General Salami underlined that although the IRGC’s missile attacks against Ein al-Assad is a source of pride and honor, the IRGC forces and commanders are devotees to the nation, and he wished he had been among the passengers of Boeing 737 and died with the passengers of the plane and wound not be ashamed before the Iranian nation today,” MP Ahmad Alireza Beigi quoted Salami as saying at a joint meeting with the parliamentarians in Tehran on Sunday.

“General Salami said that they are sad more than others about the incident and that they never thought to do something to hurt people,” he added.

According to Alireza Beigi, during the meeting, the Iranian speaker lauded the IRGC commander for his transparent and sincere remarks.

The General Staff of the Iranian Armed Forces said in a statement on Saturday that the Ukrainian Boeing 737 plane was shot down as a hostile object due to human error at a time of heightened US threats of war.

The statement said an expert investigation by the General Staff of the Iranian Armed Forces after the Ukrainian airline company’s Boeing 737 incident has found that flight 752 of the Ukrainian airlines has been shot down as a hostile flying object that was approaching a sensitive IRGC center and was shot down due to human error few hours after Iran’s missile attack on the US and as Iran’s military was expecting attacks by the US army.

Supreme Leader of the Islamic Revolution Ayatollah Seyed Ali Khamenei in a message on Saturday extended his condolences again on the death of the Ukrainian plane’s passengers, and ordered the Armed Forces to take the needed measures to find faults and flaws that have led to the bitter incident and prevent repetition of similar incidents in future.

In his message, the Leader renewed his most heartfelt sympathy and condolences to the bereaved families of the victims, and reiterated his “order to the General Staff of the Armed Forces to probe into possible faults and flaws in this painful accident,” Ayatollah Khamenei said.

He also underscored the need for the relevant Iranian directors and officials to launch the necessary follow-ups to prevent repetition of such incidents in future.

Also, Iranian President Hassan Rouhani extended condolences to the families of those killed in the Ukrainian plane incident, and promised that all those who have been guilty in the unforgivable mistake of shooting down the jet will be prosecuted.

“The Islamic Republic of Iran deeply regrets this disastrous mistake… My thoughts and prayers go to all the mourning families. I offer my sincerest condolences,” Rouhani said in a statement on Saturday.

The president stressed that “the terrible catastrophe should be thoroughly investigated, and those responsible for this unforgivable mistake will definitely be identified and prosecuted”.