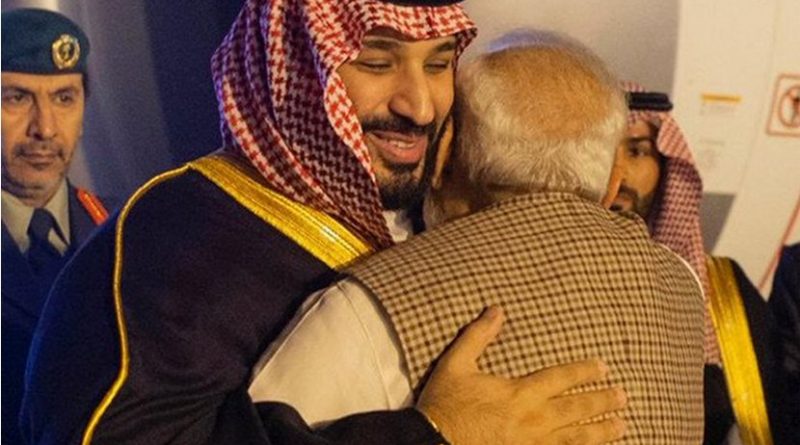 The recent visit by the Indian Army Chief General Manoj Mukund to Saudi Arabia, the first ever by an Indian army chief to the Kingdom, has marked a major step in the two side’s military dialogue but more so, the visit has sent a strong signal to Pakistan which has historically enjoyed great relationship with Riyadh. Mukund’s visit comes at a time when diplomatic ties between Saudi Arabia and Pakistan have hit an all-time low.

Last year, Foreign Minister Shah Mahmood Qureshi had demanded Riyadh to ‘show leadership’ on the Kashmir issue after India revoked Article 370-A from the disputed region. An unusual sharp criticism stirred a regional hornet’s nest which consequently led to diplomatic spat with the Kingdom seeking Pakistan’s early repayment of a $3bn loan and stoppage of a $3.2bn oil credit facility.

India may not be an old choice for Riyadh but it has recently become. As many as 2.7 million living in Saudi Arabia and are greatly contributing in the Kingdom’s development. Unsurprisingly, Saudi Arabia is also India’s biggest supplier of crude oil; India imports around 18 per cent of its crude oil requirement from the country. Saudi Arabia is India’s fourth-largest trading partner after China, the United States and Japan. Indo-Saudi annual bilateral trade stands at $27 billion as compared to Pakistan-Saudi trade which is a mere $3.6 billion.

The year 2019 marked the beginning of a new era between India and Saudi Arabia when Crown Prince Muhammad Bin Salman visited India in February while Prime Minister Narendra Modi travelled to the Kingdom in October in the same year. During these high profile visits, the two sides renewed bilateral engagements. Riyadh announced $100 billion investment in India, increased India’s Hajj quota from what previously was 170,000 to 200,000, released 850 Indian prisoners detained in Saudi prisons and identify India as one of the Kingdom’s strategic partner countries under Vision 2020. New Delhi and Riyadh also agreed to establish a joint Strategic Partnership Council to enhance bilateral cooperation.

Meanwhile, India’s neighbor and Saudi Arabia’s traditional ally Pakistan was reeling from several home-based challenged and international isolation. Just when MBS travelled to Pakistan and announced several million dollars investment, Pakistan hoped that the country’s diplomatic challenges may soon end. However, the renewed love between Islamabad and Riyadh short lived after FM Mahmood’s criticism on the Kingdom and the latter’s demand of early repayment of loans. The spat widened to a greater extent that even MBS refused to meet Pakistani Chief of Army Staff Qamar Javed Bajwa who embarked on a two day visit to normalize tensions. This was the notable moment that the COAS was denied meeting since Pakistan Army has long been the net tactical security provider for the Saudis as far as manpower goes. Besides, former Pakistan Army chief General Raheel Sharif took up the job of leading the Saudi-led multi-national alliance to fight terrorism.

On the other hand, Saudi Arabia and India had announced holding their first ever joint naval exercises in March 2020 which were cancelled due to the coronavirus. The joint drills may take place in the coming year. The Kingdom also showed interest in buying the BrahMos missile system that has been jointly developed by India and Russia.

Saudi Arabia has recently been tough on Pakistani expatriates; Pakistanis form the second-largest group of immigrants in Saudi Arabia. Saudi authorities deported 285,980 Pakistanis from Riyadh and Jeddah between 2015 and 2019. Pakistanis working in the Kingdom were a great source of adding revenue to the national exchequer.

Beyond the ambit of defence and strategic cooperation, India masterfully using its renewed closeness to Saudi Arabia for geographical reasons. India is using cracks developed between Islamabad and Riyadh to showcase itself as a new and long-term partner that suits Kingdom’s policy of opening up economy and society. Doing so would not only allow India to have greater role in the Middle East but Saudis may also prefer to step aside on India’s Kashmir policy thus denting Pakistan to a greater extent.

Certainly, bilateral relations have been enhanced between India and Saudi Arabia over the years, both in volume and composition. On the contrary, Pakistan and Saudi Arabia are at odds, first time in history. The Saudi–Pakistan disorder is not a zero-sum game, and relations between the two will reconcile sooner or later, because of deep defence and political roots. However, this relationship will look different from what it has historically been. In this scenario, Riyadh’s preference to New Delhi in enhancing economic, defence and security cooperation leaves Pakistan boxed in. Other than economic realities, the Western anti-Saudi sentiments after the killing of journalist Jamal Khashoggi and humanitarian crisis in Yemen have also pushed Saudi Arabia look towards Asia where India, not Pakistan, sits at a right position thus Saudi preference of New Delhi over Islamabad makes sense. Policymakers in Islamabad should think about the burgeoning Indo-Saudi nexus and must address differences with Riyadh because Pakistan cannot afford to lose a brotherly and traditional ally during these critical times.

*The writer is a PhD scholar at the South Asian Center in Punjab University, Lahore. She tweets @AmeenaTanvir and can be reached at [email protected]

2 thoughts on “Is Saudi Arabia Preferring India Over Pakistan? – OpEd”