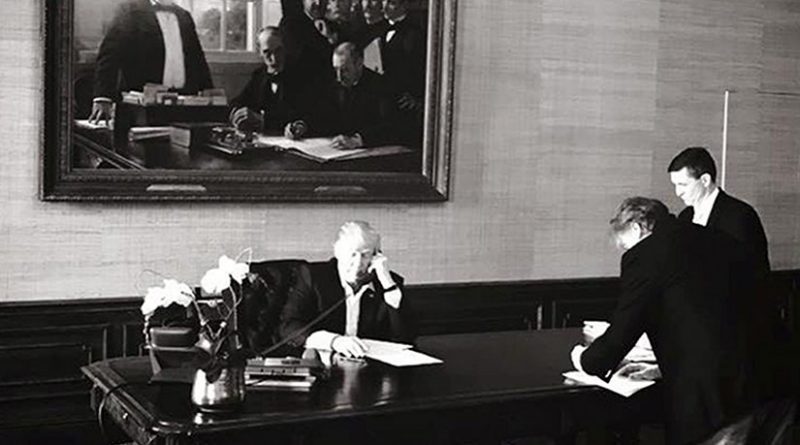 The H4 visa nightmare is happening.

It doesn’t take a Trump executive order to make the H1B community run for cover — a series of measures by the United States Citizenship and Immigration Services and other government arms to tighten the screws is good enough.

Take the latest whiplash on Women’s Day which skewers the one bright spot in the H4 visa — PTI reports the “Trump administration has sought a 60 day suspension in the appeals court proceedings” in a follow up of an ongoing case filed by Save Jobs USA which has found new resolve after the Trump win last November. Save Jobs USA wants the government to dial back the H4 work authorisation and this is not a new demand. They have been at it ever since the benefit was conferred on certain category of H4 workers in 2015. On 1 February, the Department of Justice filed a petition in the court titled ‘Consent motion to hold proceedings in abeyance for 60 days.’

For more on the case details, this press release by Immigration Voice is a useful resource. Note that the DoJ move is limited to the EAD or employment authorisation given to certain H4 visa holders depending upon the status of the H1B principal and this latest move is not about the visa itself.

While this storm brews, the question is what happens, say, if the Trump government eventually decides to cancel the H4 work authorisation. Any immediate effect is unlikely because any change will require a formal rule-making process, which would take a few months at least.

On paper, some options do remain in case the H4 EAD is cancelled, lawyers say.

For those who may have been counted against the H1B cap earlier and not yet used the full six years H1B time frame or have an approved 1-140 labor certification could possibly revert to H1B status.

But if H4 is the only option for an H1B spouse who may not make the cut in any other category of visa, then an H4 EAD revocation means it’s back to the pre-Obama days. Meanwhile, H1B-H4 issue has made it to the headlines in Trump’s favourite right wing paper Brietbart. “Trump and Sessions’ positions on foreign guest worker programmes remains highly popular with the American public, as only 30 percent of Americans said in a recent poll that the H1B visa was necessary,” the paper’s Texas outfit reported.

Understandably, there are gaps in how the latest legalese is being interpreted. Some contend that the DoJ asking for a 60 day suspension in the appeals court proceedings does not amount to a freeze but the direction is clearly towards stricter checks and more red tape.

H1B workers’ dependant spouses on the H4 visa (under certain conditions, explained below) were allowed to find paid work at the end of the Obama rule.

Considering that Trump’s spate of executive orders that has created chaos worldwide is anti-Obama at its core, the H4 backlash is no surprise at all.

By clamping down on premium processing of H1B visas and now upping the difficulty level for H4 visas, the Trump government is showing that it does not take executive orders to spread panic and confusion among immigrant labour force. Starting 3 April 2017, the USCIS will temporarily suspend premium processing for all H1B petitions. This suspension may last up to six months. Premium Processing is basically a fast track option that gets your H1B visa or extension the USCIS nod swiftly if you pony up the extra cash.

A Times of India report quotes three examples of people who have contributed positively to the US while benefitting from the rule and explains how the H4 rule to allow work authorisation is not all about “bored spouses” potentially taking away an American’s job.

Here’s what has been making the H4 community uneasy over the last few weeks — Trump’s press secretary Sean Spicer’s pointed remarks during what is clearly honeymoon season for Trump staffers: “With respect to H1Bs and other visas, it’s part of a larger immigration reform effort that the president will continue to talk about through executive order and through working with Congress.”

There has already been “a lot of action on immigration,” Spicer said, and “whether it’s that or the spousal visas or other types of visas I think there’s an overall need to look at all these programmes.”

Up until the summer of 2015, H4 visa holders could not legally hold paid employment in the United States.

The end of the Obama years changed all that and was met with wild celebrations among Indians in the US. With Trump in office and the prospect of benign neglect to immigration red flags that marked the Obama presidency now gone, H4s have a lot to be edgy about even if nothing eventually changes.

Although the H4 is not applicable to all H1B workers’ dependants, it covers a lot of ground.

Work authorisation for H4 covers dependent spouses of H1B non-immigrants on two conditions — the more crucial one being that the H1B visa holder is the principal beneficiary of an approved Form I-140, Immigrant Petition for Alien Worker which is basically a mild upgrade of the plain vanilla H1B under which an IT worker may have entered the US.

When the H4 tweaks came into force in the summer of 2015, a copious document of the final rule explained that the concern about “disincentives” to skilled, well educated spouses of H1B workers and the social/family disruptions therein were at the soul of the new permissions: “This rule is intended to remove a disincentive to pursuing lawful permanent resident (LPR) status due to the potentially long wait for employment-based immigrant visas for many H1B non-immigrants and their family members. This rule will encourage H1B non-immigrants who have already taken steps to become LPRs to not abandon their efforts because their H4 dependent spouses are unable to work. By encouraging H1B non-immigrants to continue in their pursuit of becoming LPRs, this rule would minimise disruptions to petitioning US employers. Additionally, eligible H4 dependent spouses who participate in the labor market will benefit financially. DHS also anticipates that the socioeconomic benefits associated with permitting H4 spouses to participate in the labor market will assist H1B families in integrating into the US community and economy.”

The H4 rule has not been without its critics, though. Pushback came thick and fast. Former employees of Southern California Edison filed a suit against the US Department of Homeland Security (DHS) to try and block the new regulation allowing qualifying H4 spouses to apply for employment authorisation documents (EADs). A federal district court in September 2016 dismissed the petition on the grounds of the plaintiff’s lack of legal standing. H4s have taken up paid employment all over America but the pushback both then and now is symptomatic of powerful social-economic ingredients that put Trump in the White House — hyper nationalism.

For background, here is how the case first got tossed out, reports LexisNexis:

US District Judge Tanya S. Chutkan declined to stop the policy in May 2015, finding that Save Jobs failed to show its members would suffer harm with the rule’s implementation. “There is no indication, and Save Jobs has not provided any evidence, that it is certain that H4 visa holders will apply for IT jobs and compete with Save Jobs members,” Chutkan wrote. “Save Jobs is correct that this could happen, and eventually it may in fact happen. But at this stage, it is entirely speculative whether any H4 visa holders will ever apply for IT jobs at SCE, IT jobs in California (where the members of Save Jobs reside), or IT jobs at all.” Chutkan found the same in her 27 September decision to dismiss the suit. “Here, there is simply no evidence that the H4 Rule was targeted at the tech field, or that even one H4 visa holder has sought or will seek a tech job in competition with plaintiff’s members,” Chutkan wrote. “Plaintiff’s argument, without evidence, is bare speculation, and the injury it contemplates is insufficient to establish standing.” Chutkan acknowledged that H4 visa holders may indeed compete with members of Save Jobs for employment in the tech field, but ultimately found there was no evidence to prove the group’s claims.

The same plaintiffs, armed with new resolve after the Trump win, are not backing off and immigration law firms in the US are being flooded with queries on whether the Trump administration may try to end the H4 employment permissions via this pending lawsuit.

With the Trump administration going hammer and tongs at closing loopholes commonly exploited by H1B body shops, expect the latest move to add to the list of troubles for H1B migrants and their families.

This article originally appeared in Firstpost.