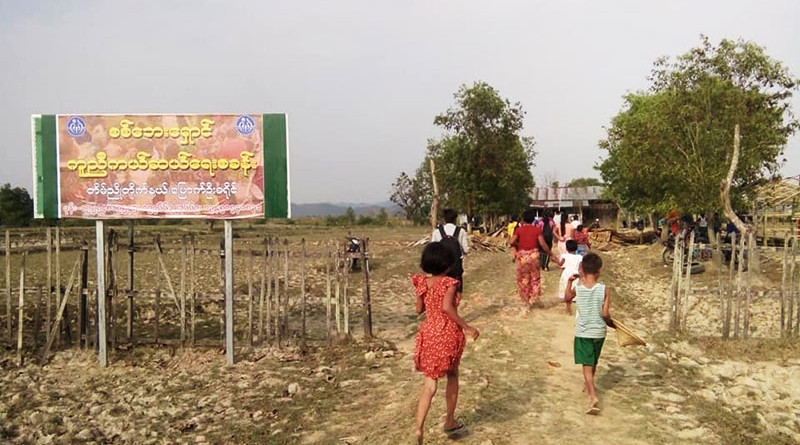 Some IDP camps in Arakan State are facing food shortages because they have not received rice from the government, said managers of the camps.

More than 3,200 refugees are taking shelter at the Tin Nyo IDP camp in Mrauk-U Township, and the camp had enough rice left for just one day when DMG spoke to camp manager U Wai Hla Aung on May 8.

“It has been more than a month since the government provided rice. If we do not get rice from the government very soon, I don’t know how we will feed more than 3,000 refugees in the camp,” he said.

The camp depends on food supplies provided by the International Committee of the Red Cross (ICRC) and the government. The ICRC provided food in March for two months, but the provisions from the government did not arrive and they are facing difficulty, said U Wai Hla Aung.

IDPs want to gain a degree of self-sufficiency by fishing and cutting firewood, but they are worried for their safety outside the camp.

“We are worried about the risk of something [being arrested or questioned] when they face soldiers in the forest while they are searching for food,” said one IDP, U Kyaw Myint Chay.

The Shwe Pararmi and Danyawady IDP camps in Rathedaung Township are also facing food difficulties because the camps have not received rice from the government since April.

“We have rice for five days,” Ko Becka, who is assisting IDPs, told DMG on May 8.
The government had provided two tins of rice per person for a day, and the rice was provided to IDP camps once a month.

DMG phoned the Arakan State government spokesperson U Win Myint, who is also the state minister for Municipal Affairs, and the Arakan State Disaster Management Department director U Kyaw Min, to seek comment on the situation, but they could not be reached.

Meanwhile, IDPs taking refuge at the Shwe Kyin Monastery in Buthidaung Township are in need of both food and clothes.

“The Ministry of Social Welfare, Relief and Resettlement provides rice, two tins per person a day. Villagers are not satisfied to eat a tin of rice for a meal,” said U Naryaka, a monk from the monastery. “Additionally, we do not have enough cooking oil, salt and chili. They do not get enough curry either. We are facing difficulties when donors could not come due to the outbreak of COVID-19.”

More than 200 people from Kantgaw Myaing village, Buthidaung Township, fled to Buthidaung town when a clash broke out near their village on April 27.

“We fled from home with nothing but the clothes on our backs. We have to ask for clothes from relatives in Buthidaung town. … We have to eat curry cooked from banana trunk with dried fish at the camp. The curry does not include oil and little salt. We have to eat that curry every day,” said Daw A Bu May from Kantgaw Myaing village.

The number of displaced people in Arakan State has surpassed 164,000 due to fighting between the Tatmadaw and Arakan Army, according to the Rakhine Ethnics Congress, a group that is compiling a list of IDPs in Arakan State.