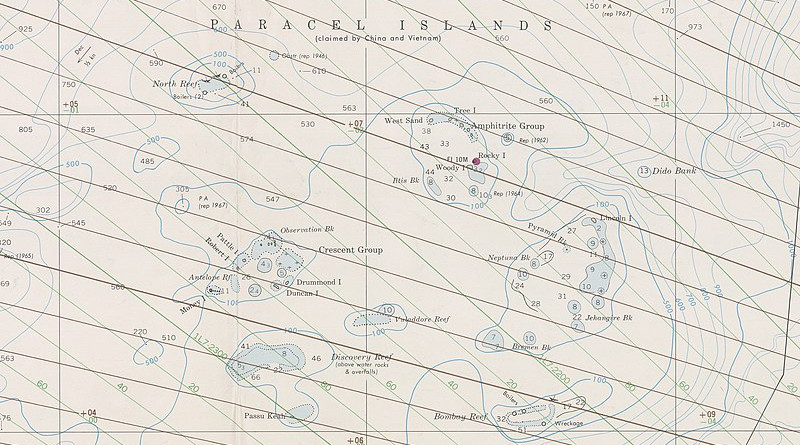 The Vietnamese government objected Thursday to report that China is laying undersea cables in the disputed Paracel Islands, saying it was a violation of Vietnamese sovereignty.

The foreign ministry comment came as Vietnam deployed a coast guard ship into another contested island chain in the South China Sea, the Spratlys, in apparent response to the presence of Chinese maritime militia around a Vietnamese outpost there.

In Hanoi, Foreign Ministry spokeswoman Le Thi Thu Hang was asked about a BenarNews report on Monday that a Chinese ship was laying or repairing undersea cables near Chinese outposts in the Paracels. The reporting was based on commercial satellite imagery and vessel-tracking software, and was cited extensively by Vietnamese state media this week.

“Vietnam has sufficient historical evidence and legal grounds affirming its sovereignty over the Hoang Sa (Paracel) and Truong Sa (Spratly) archipelagoes in accordance with international law,” Hang told reporters, according to the state-run Vietnam News Agency.

“Therefore, any activity relating to the two archipelagoes conducted without Vietnam’s permission are violations of its sovereignty and of no value,” she said.

U.S.-based experts interviewed by BenarNews said the cable work suggested that China was installing an undersea surveillance system for its occupied features in the Paracels, further militarizing the region.

Vietnam and China both claim the Paracel Islands, a series of rocks and reefs in the north of the South China Sea.

Meanwhile, BenarNews detected a Vietnamese Coast Guard ship that entered the Union Banks, an area in the Spratlys that hosts four Vietnamese and two Chinese-occupied military outposts. The ship, identifiable as the CSB-8005 on vessel-tracking software and spotted on satellite imagery, entered the area on June 4and is patrolling near the Vietnamese outpost on Sinh Ton Dong/Sin Cowe East Island.

Satellite imagery shows what appear to be at least 30 Chinese fishing boats directly north of Sinh Ton Dong as of June 5, and vessel-tracking software indicates that at least five maritime militia ships are in the area. As of Thursday, the software showed the maritime militia had moved east, but were still in the Union Banks area.

China maintains it has “historic rights” to the entirety of the South China Sea. The Philippines, Brunei, Malaysia, Vietnam and Beijing’s rival, Taiwan, have their own claims to portions of the waterway.