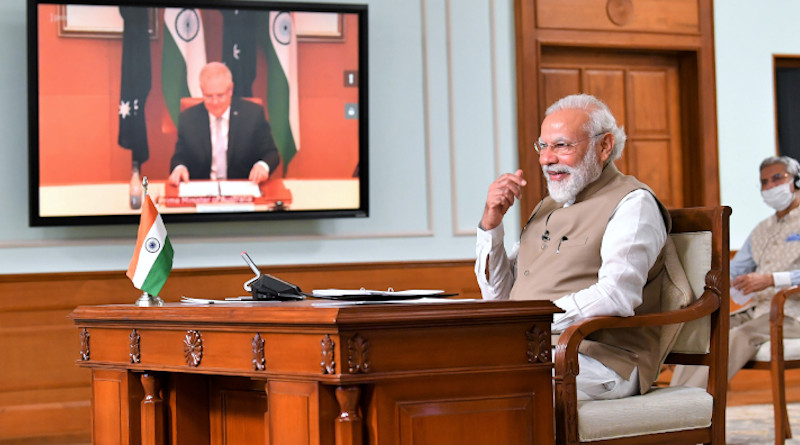 The advent of the information age has changed the way diplomacy was conducted in the past. The ongoing pandemic has exposed us to “Virtual Diplomacy” as the new technique of Negociation Continuelle or Continuous Negotiation (as put by Cardinal Richelieu) which was later labeled as Diplomacy by Edmunde Burke in 1796. Moving on from “living letter” to the establishment of temporary envoys in the second half of the 15th century, the domain of diplomacy and the tools of its execution has come a long way. And now virtual space is the new frontier of conducting diplomacy. Indian diplomacy has moved to the virtual space.

Ever since the First Ministry of Foreign Affairs was created by Cardinal Richelieu (the Chief Minister of French King Louis XIII) in 1626, the requirement of building organized communication models became a priority. However, the priority was optimized only after dedicated “foreign ministries” emerged.  It was during the 18th century “foreign ministries” became “the general rule” in Europe. Britain created its Foreign office in 1782, the US State Department was established in 1789. Turkey, Japan, and China adopted the structure in the middle of the 19th century.  Diplomatic messages were carried by hand, until the 19th century.

The telecommunications revolution has a profound impact on diplomacy. The invention of different forms of wireless communication has enabled sophisticated interaction. This has eventually led to the emergence of Virtual Diplomacy that “signifies the altered diplomacy associated with the emergence of a networked globe” as defined by Brown and Studemeister.

In fact, not just for friendly nations, the emergence of Virtual Diplomacy was employed as a tool of communication in conducting Confidence-building measures between hostile nations. The establishment of the “hotline” between the two countries falls within the ambit of CBMs.

The Cuban Missile Crisis of 1962 underscored the importance of quick and direct communication, that triggered the Memorandum of Understanding between the US and the Soviet Union regarding the establishment of a direct communication link. Later during the Arab-Israeli War (1967), Iraq- Kuwait War (the 1990s), or amidst the India-Pakistan tension, the establishment of telecommunication links was undertaken to dilute diplomatic tensions. In the recent past, the Virtual Embassy opened by the US in Tehran was another good example of the opening up of virtual space for diplomacy. The information technology revolution further expanded the scope of Virtual Diplomacy.

Although Virtual Diplomacy has drawn attention during the ongoing pandemic, India has used it as a modus operandi even before. Two years back, India Bangladesh jointly inaugurated multiple projects (in September 2018), through video conferencing.  However, after the breakout of the pandemic, India has been routinely engaging in online diplomacy. The travel restrictions have clearly set the boundaries on the scope of interaction and hence, Virtual Diplomacy is a standard form of engagement.

During the pandemic, India’s most virtual meetings centered around the multilateral platforms indicating India’s commitment towards multilateralism. In fact, PM Narendra Modi has reaffirmed India’s commitment to globalization indicating India’s continued effort to cultivate and expand its’ scope of exchange and engagement with other countries.  Hence, Virtual Diplomacy is the means to India’s diplomatic goals.

Indian leadership has been effectively using technology to overcome challenges. Presently, consular access, demarche, summits, and communication has moved to online platforms. For the first time in history, Indian envoy to Sri Lanka presented his credentials via video conferencing. Apparently, Virtual Diplomacy has emerged as the best solution for crisis diplomacy. India can come up with the idea of opening up virtual embassies in other countries if physical distancing remains a compelling factor.

While diplomacy is today constrained by the requirement of physical distance, Virtual Diplomacy has enabled seamless communication and information flow (the two fundamental aspects of diplomacy) between countries. While one might point out the merits of face to face meetings that provide better negotiating and bargaining opportunities, but again Virtual Diplomacy saves time and hassles of organizing high-level delegation visits. However, the compelling circumstances might help leaders to adapt to the virtual model over time and information technology backed communication methods might emerge more effectively in post-pandemic deliberations. Meanwhile, one should not forget the risks involved pertaining to data protection and sensitive information sharing.

*Angana Guha Roy is a Research Associate at Delhi Policy Group. This article was published also at E-International Relations.