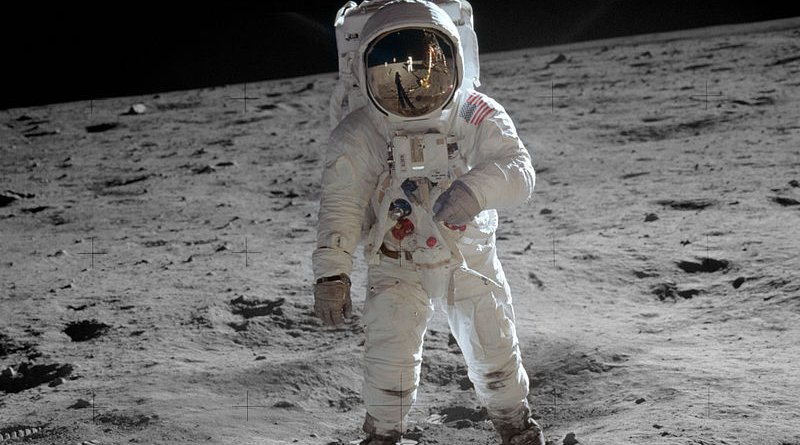 Man’s first steps on the Moon transfixed the world 50 years ago – inspiring both international cooperation and competition.

On July 20, 1969, Neil Armstrong stepped onto the lunar surface and proclaimed, “That’s one small step for a man, and a giant leap for mankind.” The 50th anniversary of the Apollo 11 mission is an opportunity to consider just how giant that one small step turned out to be.

While the word “exceptionalism” has taken on unseemly nationalist tones of late, the Apollo program exemplified American exceptionalism at its best – a country willing to do what others would not or could not. In May 1961, before America had accomplished a single orbital flight, President John F. Kennedy announced the nation’s intent to send a man to the Moon and return him safely by the end of the decade. US leaders and the agency that began in 1958 – NASA, or the National Aeronautics and Space Administration – met the challenges even after Kennedy’s assassination in November 1963. Astronaut William Anders photographed Earthrise in 1968 during the Apollo 8 mission. As one of his last acts in office, President Lyndon B. Johnson sent a copy to global leaders, including Ho Chi Minh, even though the United States was at war with Vietnam. As former director of the LBJ Library, Betty Sue Flowers, has said, he did so to show that “From the transformational perspective of the earth as seen from space, all of us, even our enemies, travel together.” Ho Chi Minh sent Johnson a thank you note.

The world cheered when the astronauts landed safely on the Moon. Sadly, however, an attitude of “been there, done that” quickly took over the American public and their politicians, and the last three Apollo missions were cancelled in 1970. Funding played a part in the cancellations, along with questions about whether the money was well spent and technology concerns after mechanical mishaps threatened the lives of the Apollo 13 crew.

Today, the US Defense Department describes the space environment as Congested, Contested and Competitive, a description adopted by others as well. These terms provide a yardstick for measuring the “giant leap for mankind.”

Space is congested. In 1969, fewer than 100 satellites orbited the Earth while as of 31 March, there were 2,062 – a number that is rapidly growing. Congestion creates problems, particularly regarding the potential for space debris. Scientists once thought of space as so vast that the chance of satellites colliding was miniscule, yet in 2009, a Russian satellite and commercial satellite collided, creating more than 1000 pieces of debris 10 centimeters or larger. Such debris can randomly hit spacecraft, as over-dramatized by the 2013 blockbuster movie Gravity. Because of the high speeds involved, even a hit by a small piece can be catastrophic.

Space – once the almost exclusive domain of the United States and the former Soviet Union – has opened to other countries and commercial ventures. Today, 12 countries and one regional organization have launched their own satellites, and more than 60 countries or organizations own at least one satellite.

When Princeton physicist Gerard O’Neill published The High Frontier: Human Colonies in Space in 1977, he anticipated colonies by 1995. He expected NASA to carry his vision to reality, but died disheartened in 1992. British physicist Freeman Dyson wrote the introduction to the 2013 edition of High Frontier, noting that NASA, with its focus on the International Space Station, or ISS, was “not a step forward on the road to the High Frontier. It’s a big step backward, a setback that will take decades to overcome.” The international cooperation demonstrated on the ISS has been noteworthy, particularly between the United States and Russia, though the United States has deliberately stiff-armed China’s participation. Overall, ISS has not been a steppingstone into the galaxy, but an end in itself.

Space, many advocates expected, would evolve like any other geographic region – first through government-sponsored expeditions, then through private ventures. Analysts certainly expected the space industry to evolve similarly to the automobile, aircraft and computer industries, initially through government seed money and then private capital. But that happened only recently. NewSpace companies, those largely privately financed by billionaires – and not offshoots of large defense companies – are rapidly changing the complexion of space business and consequently the space environment. Space will likely become more congested due to such activity. And NewSpace has also brought new meaning to space competition.

One of the key reasons O’Neill’s vision hasn’t reached fruition, or even really germinated, has been exorbitant launch costs. But competition among NewSpace companies like SpaceX, Blue Horizons and Virgin Galactic are bringing launch costs down, taking risks NASA and its old-guard launch suppliers are unwilling or unable to take. Lower launch costs have also spurred real activity in areas of commercial space previously limited largely to PowerPoint slides.  Space mining, space habitats and space tourism are rapidly becoming reality.  So competition has its upsides for advocates of space exploration and development.

That leaves “contested” as the last mantra for consideration, and it is here that things get especially prickly. “Contested” means that countries other than the United States are increasingly developing technical capabilities to do the same tasks that have given the United States an economic and especially military edge. That has triggered a security dilemma of the most classic kind with countries developing space technology to protect their advantages or alternatively to assure that no other country, especially a potential adversary, has an unbreachable technological advantage.

Underfunded calls for the United States to return to the Moon by 2024 notwithstanding, it is possible that the next voice transmissions from the Moon will be in Chinese.

Countries including China, Russia and India have tested anti-satellite capabilities also possessed by the United States, while the latter brazenly touts plans for deploying space weapons. The “space-as-warfare-domain” school of thought has triumphed in Washington, and the Trump administration’s calls for a Space Force – not actually to be deployed in space, but rather at Pentagon desks developing space-warfare strategies – further signifies that premise.

Most space technology is inherently dual use – offering both civil and military uses – so there has always been the threat of capabilities being used for nefarious purposes.  Previous US leaders resisted overtly crossing the line of space-weapons deployment to avoid the “inevitability” theory becoming a self-fulfilling prophecy.

In the 50 years since Apollo 11, the dreams of visionaries like O’Neill have largely been stalled and security communities have become the landlords of space. Armstrong’s crewmate on Apollo 11, Buzz Aldrin, has long campaigned for “Mars or Bust,” but that goal, too, remains largely aspirational. Further, Earthrise’s imagery of one planet “traveling together” has faded from memory in terms of addressing issues like climate change from a united front.

The good news is that space development is underway, largely due to NewSpace efforts. Such efforts could change the landscape of the future, assuming that sustainability is maintained. Sustainability is in everyone’s best interests – including the military. Military officials from the United States have begun to call for “rules of the road” for space, basically meaning development of “best practices”: not creating space debris and strengthening transparency and confidence-building measures, TCBMs, essential for avoiding misunderstandings and misinterpretations of actions. The UN Committee for the Peaceful Uses of Outer Space has made significant strides on best practices and TCBMs, but the UN is not a favored venue of either the US military or the United States generally. Perhaps that will change as space becomes more congested and contested.

Armstrong’s “giant leap for mankind” has stumbled, but not fallen and there is still room for optimism.