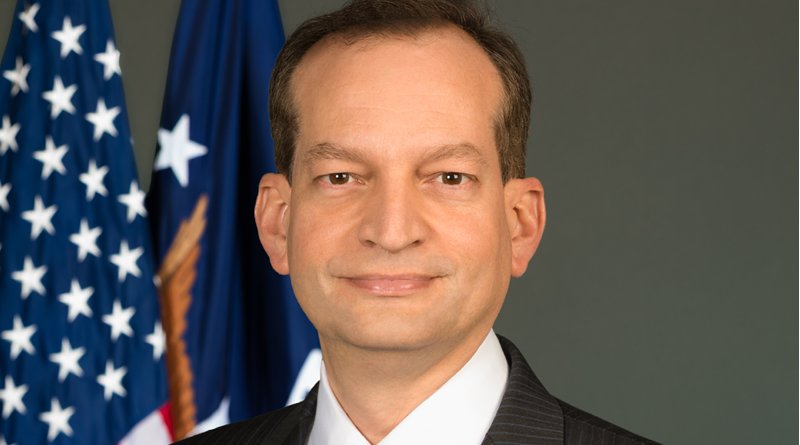 Trump made the announcement with Acosta by his side Friday outside the White House before Trump left for a trip to the Midwestern U.S. states of Wisconsin and Ohio. “I hate to see this happen,” the president said.

“He made a deal that people were happy with and then 12 years later, they’re not happy with it,” said Trump referring to Acosta’s actions more than a decade ago as a federal prosecutor, in agreeing to a light jail sentence for multimillionaire hedge fund manager Jeffrey Epstein, who was accused in a child sex trafficking case.

“You’ll have to figure all of that out. The fact is, he has been a fantastic secretary of labor,” said the president.

Acosta told reporters he made the decision to step down. “I called the president this morning and told him that I thought the right thing to do was to step aside,” he said, adding that it would be “selfish” tostay in this position, and distract from what he calls the “amazing economy we have right now.”

Acosta’s announced resignation comes two days after he defended his actions on the Epstein case.

“Without the work of our prosecutors, Epstein would have gotten away with” a lesser state charge that “would have let him avoid jail time,” Acosta told reporters on Wednesday. “We did what we did because Epstein needed to go to jail.”

“We believe we proceeded appropriately,” Acosta said. “There is value to a sure guilty plea.”

Some lawmakers, including the top two congressional Democrats, demanded Acosta’s resignation for his role in allowing Epstein to plead guilty in 2008 to Florida state prostitution charges, for which he served a 13-month term and most days was freed to work at his office in south Florida. He also was required to register as a sex offender and pay restitution to the underage girls he abused.

At the same time, a federal investigation in Miami was ended. This week, however, federal prosecutors in New York brought new charges, accusing Epstein of exploiting dozens of underage girls from 2002 to 2005, paying them hundreds of dollars for massages and demands for sex at his mansion on New York’s Upper East Side and at his estate in Palm Beach, Florida. If convicted of the new charges, he could face 45 years in prison.

Acosta said the case in 2008 “was complex,” with many of the victims too “scared and traumatized” to testify against Epstein at a possible trial.

“These cases weigh whether there is guaranteed jail” resulting from a guilty plea, or the uncertain outcome of a trial, he said.

Barry Krischer, who was the Palm Beach County state attorney at the time, rejected Acosta’s characterization of the case in a statement Wednesday, saying the federal prosecutors could have proceeded with federal charges against Epstein.

“If Mr. Acosta was truly concerned with the State’s case and felt he had to rescue the matter, he would have moved forward with the 53-page indictment his own office drafted. Instead, Mr. Acosta brokered a secret plea deal that resulted in a Non-Prosecution Agreement in violation of the Crime Victim’s Rights Act,” Krischer said.

Trump on Tuesday praised Acosta’s performance as labor chief for the last 2 1/2 years, but said he was “very carefully” considering Acosta’s role in the Epstein case.

Two decades ago, Trump, whose Mar-a-Lago estate in Palm Beach is not far from Epstein’s mansion there, posed for pictures with him. Trump once told an interviewer Epstein was a “terrific guy. He’s a lot of fun to be with. It is even said that he likes beautiful women as much as I do, and many of them are on the younger side.”

But Trump told reporters at the White House on Tuesday he has not spoken with Epstein in 15 years and had a “falling out” with him, but offered no details.

The Epstein case drew new attention this week with the New York charges.

In Monday’s indictment, Geoffrey Berman, a federal prosecutor in New York, accused Epstein of allegedly paying the girls hundreds of dollars for nude or partially nude massages that “increasingly were sexual in nature.”

The prosecutor said Epstein often paid some of the victims, some as young as 14, to recruit other underage girls that he then also abused.

Despite the fact that the allegations against Epstein stem from incidents that occurred more than a decade ago, Berman said, “We want to make sure [the accusers] have their day in court by bringing these charges.” In a court appearance, Epstein pleaded not guilty to the charges.

Epstein is a well-connected financier whose friends also included former President Bill Clinton and Britain’s Prince Andrew, along with numerous other celebrities.

Wayne Lee contributed to this report.