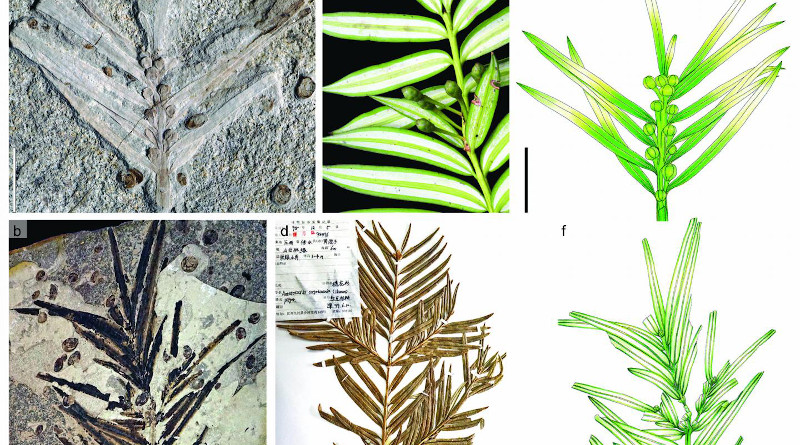 (a, b) cf. Amentotaxus from the Middle-Late Jurassic Daoguhou Bed in eastern Inner Mongolia, China. (c) Living A. yunnanensis. (d) Living A. argotaenia. (e) Reconstructive drawing of specimen in (a). (f) Line drawing of the two-order leafy shoot in (b). CREDIT: ©Science China Press

The Taxaceae are a distinct conifer family widely used in ornamental horticulture and are an important source of chemotherapeutic drugs (e.g., Paclitaxel). Fossil evidence of Taxaceae is based mainly on isolated leaves or leafy shoots for which the reproductive structures are unknown. However, several more complete fossils with attached seed-bearing structures show that Taxaceae had diverged from other conifers by the earliest Jurassic and were probably diverse during the Jurassic and Cretaceous.

Dong and colleagues add to knowledge of early Taxaceae based on well-preserved fossils from the Middle-Late Jurassic (~160 Myr) Daohugou Bed in eastern Inner Mongolia, northeastern China. The material includes the terminal portion of a leafy shoot with attached seed-bearing structures, and a leafy shoot with two-orders of branching in which each ultimate shoot has a terminal conical bud. The fossil leafy shoots have opposite and decussate leaves. Attached seed-bearing structures arise singly from the axil of a normal vegetative leaf and consist of a short, naked axis bearing a single terminal seed that is enclosed by pairs of opposite and decussate bracts.

These fossils bear a striking resemblance to the leafy shoots and seed-bearing structures of extant catkin-yews Amentotaxus and only differ in having shorter seed-bearing axes. Assignment of the fossils to the living genus is also supported by cladistic analyses based on morphological characters of living and fossil Taxaceae. These fossils are among the most completely known of all fossil Taxaceae. Extant catkin-yews are endangered and have very restricted distributions in Eastern Asia. The Daohugou fossils document that among the diverse extinct Mesozoic Taxaceae were ancient catkin-yews. Like Ginkgo biloba, the catkin-yews are living fossils that have undergone little morphological change since the Middle-Late Jurassic.

The U.S. Supreme Court will not save us. It doesn’t matter which party gets to pick the replacement to fill Justice