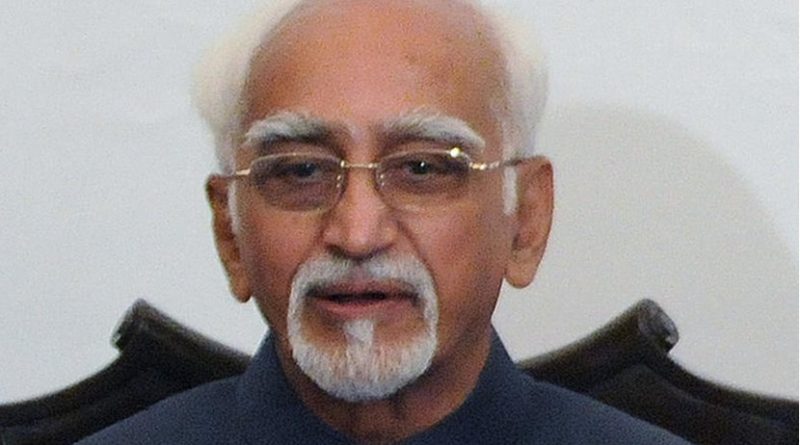 India’s 12th Vice President Hamid Ansari, who handed over the baton to M Venkaiah Naidu on August 11 after a distinguished 10 years in office, has the rare distinction of being only the second incumbent to have served for two full terms (2007 – 17) , the other being India’s first Vice President Dr. S Radhakrishnan (1952–62).

A career diplomat and scholar who has also served as Vice Chancellor of Aligarh Muslim University, Ansari discharged his duties as the Chairman of the Rajya Sabha, the upper house of the Indian Parliament, with a deft mix of firmness and fairplay. At his farewell he was praised by most parliamentarians across the political divide for his legislative acumen and his abiding commitment to the letter and spirit of the Constitution.

However since the Modi government assumed office in mid 2014, certain unbecoming and baseless aspersions were cast on Ansari by some elements of the ruling party. To his credit, Ansari maintained both his silence and the dignity of the high constitutional office he occupied.

Thus it was not surprising that in his farewell remarks, Ansari referred to being unjustly accused on so many occasions that proving his innocence was becoming difficult, A speech that Ansari delivered in Bengaluru on August 6 to a local law school has become the latest lightning rod for his detractors – though the content is vintage Ansari and will be long remembered for its magisterial breadth of vision and its incisive interpretation of the Indian Constitution.

Dwelling on why pluralism and secularism are essential for the nurturing of equitable democracy in India, the outgoing VP provided an empirical and interpretative underpinning to his remarks that are irrefutable. Over the last year plus, the sectarian divide in India has come into undesirable focus and the beef ban is symbolic of this societal animation. The minorities – particularly the Muslims and Dalits (untouchables and lower castes in the Hindu social hierarchy) have been the most affected and there has been a steady rise in intolerance in many parts of India.

Highlighting the fact that India’s population of 1.3 billion comprised over 4365 different communities, of whom a staggering 78 percent are autonomous linguistic, cultural and social categories, Ansari added that the religious minorities alone constitute 19.4 percent – just under a fifth of the total population.

Drawing on a rich discourse on the linkages between democracy, dissent and diversity, Ansari noted that in its practice “Democracy has to be judged not by the institutions that formally exist but by the extent to which different voices from diverse sections of the people can actually be heard. It’s raison d’etre is the recognition of the other.”

The BJP’s majoritarian Hindu orientation has caused considerable disquiet among large cross-sections of the country and they have been intimidated into sullen silence or uneasy self-regulation. The rash of vigilantism directed against the minorities or gender related matters is illustrative.

Pointing to the normative benchmarks of the Indian Constitution, Ansari cautioned that “Programmes or principles evolved by political parties based on religion amount to recognizing religion as a part of the political governance which the Constitution expressly prohibits. It violates the basic features of the Constitution.”

Over the last decade, a hallmark of Ansari’s remarks in the public domain have been the measured, scholarly turn of phrase and the rectitude with which he has remained within the constitutional propriety of his office. Referring to his role as the Rajya Sabha Chairman being akin to an impartial umpire, he said to deliberate and legislate in an informed and sagacious manner was an important metric in a robust democracy.

This aspect received mention at Bengaluru and again the facts marshalled by Ansari are irrefutable. Noting that in 1953 the number of sittings of the two houses of parliament were 137 and 100 for the Lok Sabha and Rajya Sabha respectively, he observed that this has declined to 49 and 52 sittings in 2016. And furthermore, “over 40 percent of the Bills were passed with less than one hour of debate.”

Reviewing the substantive functioning of Indian democracy on the eve of the 70th anniversary of its independence, Ansari reminded his interlocutors that the national track record is well below the median by way of equitable representation. In 2014 women MPs in India were 12.15 percent of the total and this figure “compares unfavourably globally as well as within SAARC and is reflective of pervasive neo-patriarchial attitudes.”

Extending this pattern of inequitable representation to the religious minorities, Ansari spelt out yet another irrefutable statistic – Muslims constitute 14.23 percent of the population but this is not reflected in Parliament. Of a total strength of 790 parliamentarians , the number of Muslim MPs stood at 49 in 1980 and declined to 23 in 2014. This works out to 2.9 percent of the 790 Indian MPs in both houses.

Specific to the internal security challenge, Ansari warned there is evidence to suggest that “we are a polity at war with itself” and that the commitment to the Rule of Law is under serious threat. Reference has been made to the dilution of the efficacy of the institutions of State and the dangers of “ochlocracy or mob rule.”

The most salutary caution that the outgoing Vice President dwelt on was the currently contentious issue of nationalism. Recalling Nobel laureate Rabindranath Tagore and his views about the “idolatry of the Nation”, Ansari identifies the contour of what is emerging in recent years: “More recently an alternate viewpoint of “purifying excluvism” has tended to intrude into and take over the political and cultural landscape. One manifestation of it is “an increasingly fragile national ego that threatens to rule out any dissent however innocent.”

Ansari warned against promoting “intolerance and arrogant patriotism” and said, that left unchecked, these twin malignancies would have an adverse impact on pluralism and secularism, the precious core values so deeply embedded in the Constitution.

Public discourse in India in recent years has been diffident or timid in not unambiguously noting the many distortions and illusory claims that have been made by the government in upholding the spirit of the Constitution. A not so subtly differentiated class of the ‘other’ is being created and different organs of the state have either been co-opted or compelled to acknowledge this deplorable gradation.

Ansari concluded by offering a bench-mark that is unexceptionable and non-negotiable within the context of the normative ecosystem wherein “Citizenship irrespective of caste, creed or ideological affiliation is the sole determinant of Indianness.”

A rigorously crafted speech with as many as 34 end notes, Ansari, in his August 6 speech, discharged his constitutional responsibility without fear or favour to the very end. Neither condescension or disparaging criticism are warranted.

Dr. B R Ambedkar, the architect of the Indian Constitution, would have approved of this rare and elegantly worded fidelity to its spirit.

Home » Without Fear Or Favor: A VP Ends Tenure With A Sharp Message – Analysis