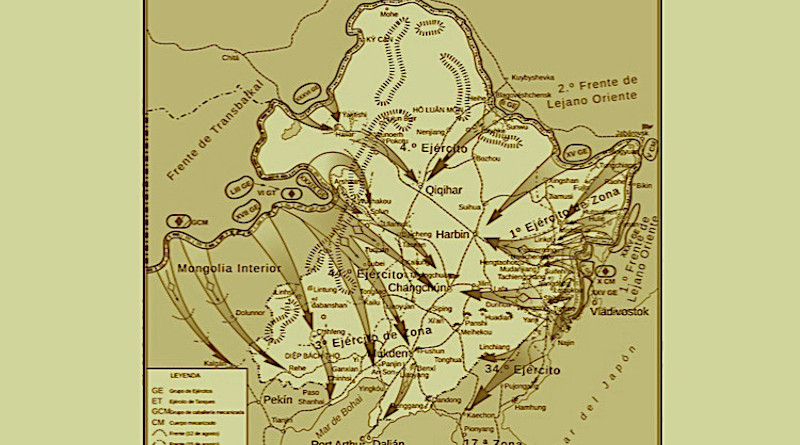 Seventy-five years ago the nuclear bombing of Hiroshima on August 6 and on Nagasaki on August 9 was premeditated mass murder.

President Harry Truman had a workable alternative to using the atom bomb – to cooperate with Stalin, as Roosevelt and Churchill had done on the Western front, in the Soviet advance on Japan, rather than making it a race for control.

Indeed, it was the Soviet advance that convinced Japan to surrender.** Although unaware of each other’s thinking both Truman and the Japanese leadership shared a common cause – they both wanted to pre-empt the possibility of the Soviet Union occupying parts of Japan before the U.S. had got its boots on Japanese ground. Truman did not want to be compelled to concede Soviet participation in the government of post-surrender, occupied, Japan.

But the atom bombing of the two cities was always explained by President Harry Truman as a necessary step that was only taken because there remained no other way of forcing capitulation and saving the lives of hundreds of thousands of American troops. But it is simply not true. A good part of his motivation to use the first nuclear bombs was to pre-empt the Soviet advance.

The evidence now available suggests that the nuclear bombing was not decisive in persuading Japan to surrender. The Emperor and the war leadership were told about the atomic bombing but it did not affect their will to continue the war. The Soviet invasion did. Without the Soviet entry into the war the Japanese would have continued to fight until quite a few more atomic bombs had been dropped and until there had been a successful U.S. invasion of the main home islands.

When the Red Army invaded Manchuria on August  9 – which President Truman, Prime Ministers Winston Churchill and Clement Atlee, and Premier Joseph Stalin had agreed to at their meeting in Potsdam in July – the Japanese political leadership were taken by total surprise.

The invasion undermined their confidence as well as punching a fatal hole in its strategic plan. Without Japan’s surrender Tokyo knew that the Soviets would occupy Manchuria, southern Sakhalin, the Kuril Islands and a good half of Korea and then move further southward into the mainland. This, not the nuclear bombing, was the key factor in the Japanese surrender.

The U.S. conventional bombing attacks on Japanese cities in the spring and summer of 1945 were almost as devastating as Hiroshima. They often caused more damage and even more casualties. Altogether 66 Japanese cities were attacked that summer, and a typical raid of 500 bombers could deliver 5 kilotons of bombs. The Hiroshima bomb was the equivalent of 16 kilotons, only three times bigger than the average conventional raid. The conventional bombing hadn’t convinced the Japanese leadership of surrendering. So it was not surprising that the atomic bombing didn’t either.

The nuclear bombing was unnecessary. None less that Dwight Eisenhower, later to be U.S. president, the supreme Allied commander in Europe, said that at the time the decision to bomb was being fashioned, “I voiced my grave misgivings on the basis of my belief that Japan was already defeated and that dropping the bomb was completely unnecessary.” Admiral William Leahy, who presided over the combined U.S./UK chiefs of staff wrote that, “We had adopted an ethical standard common to the barbarians of the dark ages”.

Neither the American conventional nor the nuclear bombing turned the heads of Japan’s leaders. Its Supreme Council did not meet until two days after the Hiroshima attack of August 6. Yet when the Soviets intervened on August 9 word reached Tokyo by 4.30 am and the Supreme Council met by 10.30am. Following Hiroshima, Emperor Hirohito had taken no action. He merely asked for “more details”. When he heard of the Soviet invasion he immediately summoned Lord Privy Seal Koichi Kido and told him, “In the light of the Soviet entry…. It is all the more urgent to find a means to end the war.”

As Prime Minister Kantaro Suzuki explained on August 13, “Japan had to surrender because the Soviet Union will take not only Manchuria, Korea, Karafuto, but also Hokkaido, (a large northern island belonging to Japan). This would destroy the foundation of Japan. We must end the war while we can deal with the United States.” The Japanese surrendered on August 15. The Soviet advance was halted in its tracks.

Saturday is the date we remember the defeat of Japan and it’s time the world should decide to revolutionise its poorly attempted effort to rid itself of nuclear weapons, capable of destroying all our major civilizations.

How far have we progressed in getting rid of nuclear weapons which now have proliferated far and wide? Briefed by the military in 2017 on the levels to which American and Russian nuclear arsenals had been reduced through arms treaties, President Donald Trump reportedly demanded that the United States increase its nuclear stockpile tenfold. According to some reports, this was what prompted the secretary of state at the time, Rex Tillerson, to call the president a “moron”.

Trump has withdrawn the United States from the Intermediate-Range Nuclear Forces Treaty and the Iran nuclear deal, and he has not yet extended the New START accord that cuts the U.S. and Russia’s long-range rockets by 1000 each, the only agreement still in place limiting American and Russian most deadly nuclear forces. It was signed by Presidents Barack Obama and Dimitri Medvedev and expires, unless renewed, in early February next year.

We should never forget that it was the Americans who dropped those two bombs and they, more than any other nation, have the duty to get rid of them. Yet a recent poll showed that although a majority (a bare one) thought that Hiroshima was wrong, 55% of Americans think that if their country was about to be defeated in war today nuclear weapons should be used.

“Now I become death, the destroyer of worlds.” – the words of the scripture of the Hindu Bhagavad Gita, quoted by Robert Oppenheimer when the bomb went off. He had led the team that made the first atom bomb. Later he preached against the H-bomb and promoted the message that there was a lack of utility in ever-larger arsenals. If he could come to his senses so then must we.

** [The Soviet invasion of Manchuria, formally known as the Manchurian Strategic Offensive Operation or simply the Manchurian Operation, began on 9 August 1945 with the Soviet invasion of the Japanese puppet state of Manchukuo. It was the largest campaign of the 1945 Soviet–Japanese War, which resumed hostilities between the Union of Soviet Socialist Republics and the Empire of Japan after almost six years of peace. Soviet gains on the continent were Manchukuo, Mengjiang (Inner Mongolia) and northern Korea. The Soviet entry into the war and the defeat of the Kwantung Army was a significant factor in the Japanese government’s decision to surrender unconditionally, as it made apparent the Soviet Union had no intention of acting as a third party in negotiating an end to hostilities on conditional terms. – Wikipedia]